New project on the horizon

As some will know, I have a few games I created in years past, both historical games. One was a huge hit (Legends of the High Seas), the other was just okay Heroic). Both were produced by other companies and my overall experience has been mixed. Yes its cool to have your work published, but its another when they get the rewards for all that you have done.

Well for the longest time, I have thought about going the self publishing route, I want to have full control of the process and also reap the rewards myself. So after talking to the wife and some close friends, I think I am going to take the leap into trying my hand at self Publishing my own rules.

So what could it possibly be you ask? Well once again a few folks know that I am a huge lover of skirmish games. So the focus will be based on those. I love games that do not require a ton of models and I think that most people can get a small force painted up rather quickly. I also love the fact that 3D printing is taking off, you can pretty much find a ton of STL files for just about anything you may want. This too will allow people at home with printers to have access to a ton of figures.

I also want to keep this skirmish game based on historical periods, I am looking at doing various time frames using the core rule set to be able to play any period. I am a huge fan of Wiley Games and love how Jaye has done this with his own rules. Now some may ask or suggest just playing his rules, which I do, but I want to play with my own rules.

So what periods am I looking at, well to start, looking at Dark Ages and a focus on Vikings, then would love to do some Samurai, Crusades, Pirates (of course!) as well as stuff like Teddy Roosevelts Rough Riders, WW1 or WW2 and even Vietnam (thats a long way off though). But first will be dark ages for sure.

I am also looking at keeping the rules right around $15.00 for a printed book, also looking at maybe doing some scenario cards or mission cards. The main book will have themed scenarios in it, but I want to add a few more and like the card idea.

So there you go, I see Long ships on the Horizon with a bunch of scary looking Viking Raiders sailing for glory and treasure, much like I see myself right now going down this self publishing route. So stay tuned, will be using this blog to show off some of the work that I am doing...

Finished up this beast today, really love how his face turned out and adding gloss to the mouth, eyes and nostrils really makes him pop. 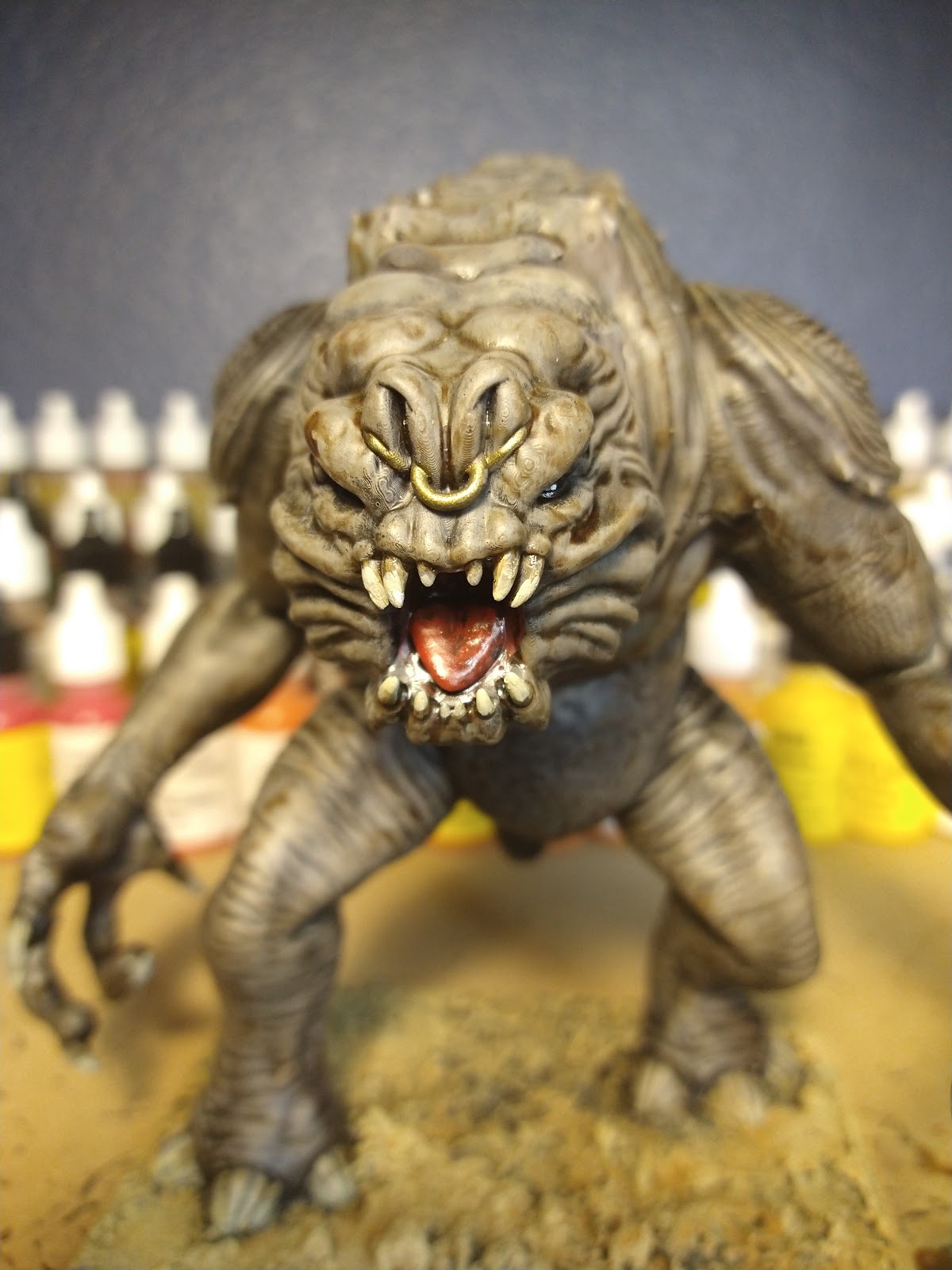 There are more figures being printed and on the paint bench, stay tuned.

TK
Posted by Tim Kulinski at 5:16 AM No comments:

Count, Farm boy and a Pet

Still plugging away on the 3D prints, this weekend I finished up these two, a Imperial Count and a Local Farm Boy. The count I think is supposed to be Count Dooku, but will stand in for just a regular Imperial Hero. The Farm boy is Luke Skywalker in the Dagaba costume. Both were fun to paint and will be perfect for this big game I am planning

Some people may see a larger thing in the background, well that is the Rancor I have been working on, finally getting paint on it and liking the way its coming out. Its still a work in progress, but its almost complete and I am loving it as well.

As I said before, I am really loving these 3D prints, the cost is very good and the quality is just as good if not better then commercially made models out there.

So there you go, some more progress done and another post!

Posted by Tim Kulinski at 11:30 AM No comments:

Bobba Fett in the house

One on the left in his full armor and the one on the right him in the Tusken raider outfit from the Book of Fett. Really love these 3d prints.

So just a quick update today, still working on getting models ready for this Star Wars game I will be running.

Posted by Tim Kulinski at 6:05 AM No comments: