Gathering in the Desert 2010 planning begins!

Well as the title states, the planning for GitD has begun! As some close friends know, I was contemplating not running it again since GW looks to be dropping the LotR SGB line in favor for WotR. but after thinking about it, I decided that I will continue with GitD even if GW does drop LotR SBG.

So the first thing up in planning is on where we will hold the event again, which looks to be in the same location at Empire Games 1766 S. Greenfield Road: Mesa, AZ 85206. Kyle & Brock we kind enough to host last years event and we look forward to heading back there again in 2010.

The next large hurtle to leap is deciding on changing the points allowed for the game. Currently we are thinking of increasing the point to either 650 or to 700 points as opposed to 600 points we have done in the past. I have a poll running on our local forum Adeptus Arizona http://www.adeptusarizona.com/forums/viewtopic.php?f=25&t=1290 I will also include a poll here on the blog for those that wish to way in on the matter. My personal reason for the increase is to allow folks to bring more Hero's or a few more troops. 650 seems about right while 700 points seems to be too much for 2.5 hour games. Also most of the local guys have their armies built to 600 points, so adding 50 points would mean a few more troops, another hero or a better hero. So it would not be a large impact for folks to add a few models.

The next item is scenarios, which after the feedback from last year we are working on making a few changes on some of the scenarios. I will give a few hints, The Artifact scenario will return, and there may be another chance to look for Bilbo's treasure or light your self on fire, but we shall see.

Another item is terrain, we will once again be having a terrain building contest too see who can build the best looking table. This year I am going to allow folks to build full tables that can be placed on the tables at Empire Games. I have heard from Tom O & he is planning on building another table and bring along his dreaded Osgilith table again, although with a few less pieces. I also have a few planned boards that I am anxious to build like a Dwarven table as well as Weathertop for Amon Sul.

The Red Dragon painting competition will also return, with a possible new catagory for 40mm bases alone. After walking away with two Red Dragons, I will see if I can capture anymore this year. And just for the record, the GitD Staff did not vote on the Red Dragons. We Let the Empire Games Staff vote on those!

So there you have it, the beginning of planning for GitD 2010, as always I will keep you all posted along the way...

I heard back from Lonnie, he likes the test model, will move ahead with the army to "Get Er Done"! So sorry to DS & DT, no other pics will go up on the alternate scheme, Lonnie likes whats there. Now to crank out about 150 Steel Legion Guard and about 6 vehicles, which needs to be done by July for Lonnie (when he will be home for a bit from Iraq). So you know what I will be working on for the next month.

Work still continues on another commission for Mike, his Italians for FoW. he finally got the rest of his army in and will be delivering it sometime next week. Also the numidians from Hank arrived last week, basically a huge box full of lead, in it are Johns Spartans that I need to get to him (thankfully I don't need to paint those). The Numidian Project will be delivered to Hank at Adepticon 2010 and will be used in a Classical Campaign that a few of us at Adepticon are working on, stay tuned for more info in the following weeks.

This weekend here in the States is Memorial Day weekend, take some time to remember what soldiers, Past, Present & Future have done for you & your freedoms. It may be about BBQ's, but we should never forget what these brave folks did or are doing now for us, God Bless them and thank you for your sacrifice!

TK
Posted by Tim Kulinski at 7:23 AM No comments:

Some know that I have taken on a painting project for a friend of mine, Lonnie Jordon. It encompass' painting his Steel Legion for him and here is a test model that I dipped last week & have been pondering if I like it or not. Now Lonnie wants his Steel Legion to have a WW2 feel to them and I am using a color scheme based off of German uniforms. So I thought I would post this up to let you all see, as well as let Lonnie see and give me feedback on it. 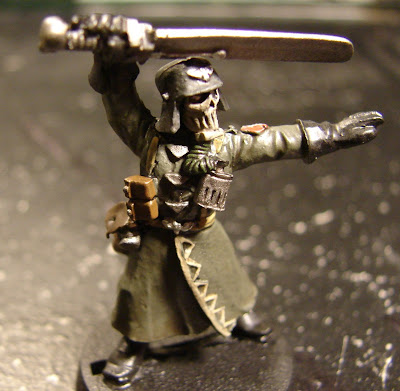 Now the base colors are from Vallejo and the coat &; pants are in German Fieldgrey #102, boots and gloves are done in Black with a highlight of German Grey #167. Pouches and canteen are done in German C Mediumbrown #145. The straps and belt are done with Green Ochre #119. Everything done in silver used GW's Boltgun Metal and his Facemask is done with Creamcoate Mudstone. I dipped the figure in Minwax Polyshades Tudor and it was brushed on. 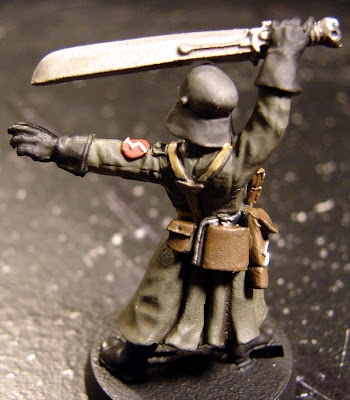 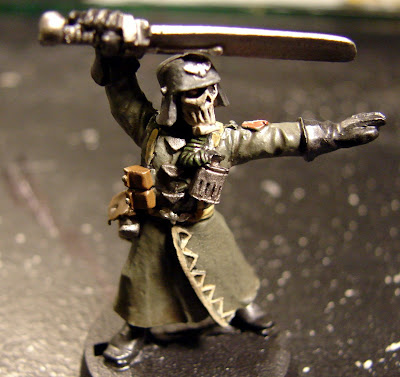 All in all it looks good, but I am not the one paying for it, so it needs to be approved by Lonnie. I can see by the photos that there is a hideous mold line on the helmet and the dip was put on to lightly since it did not recess in all the folds. But all in all looks good.
TK
Posted by Tim Kulinski at 12:58 PM 3 comments:

So here are the few Pulp figures I had worked on this week for my buddy Mike, we are planning on doing a Desert Pulp game similar to the Mummy. The below figures are from Pulp Figures from Bob Murch http://www.pulpfigures.com/ These are some generic British troops to fight off the Mummies. 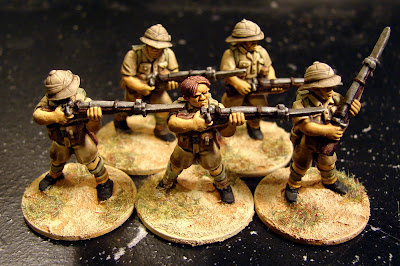 Here are a few Copplestone Figures as well as another Pulp Figure (middle) to represent Treasure hunters. 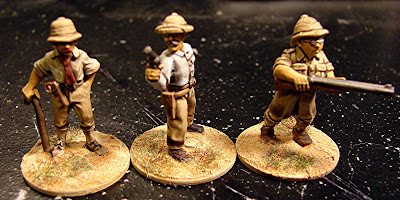 Last are a few more Copplestone and another Pulp Figure (middle) to represent a few Hero's. The Figure on the Left looks to me like Rick O'Connel (aka Brendan Fraser from the Mummy). On the right needs no explanation, but good old Indian Jones himself. 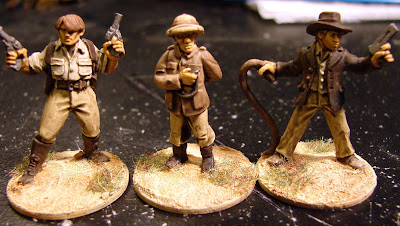 Also this week, I completed a deal with Mike to get this little box set below, that's right, I am going to get into Flames of War. We are all working on doing North Afrika and this 1500 point army will get me going for our little campaign. Now Jerry is going to flip out! 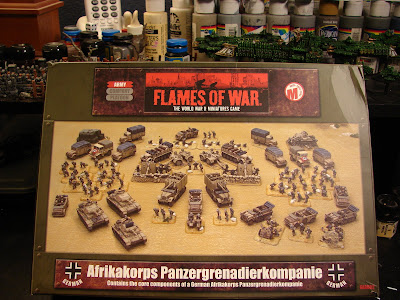 Here is how 1500 of DAK comes package, for big blisters! Now I need to get started on this! 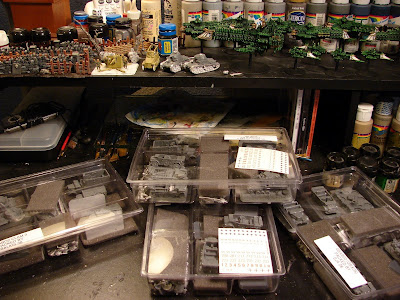 Oh by the way, I have to paint a 1500 point Italian army for Mike for the DAK, so I am going to be really busy with painting. Good thing my job is almost over, I am going to need all the time to finish projects!
TK
Posted by Tim Kulinski at 4:29 PM 5 comments:

Whats been going on???

So some have noticed that I have not been doing my twice weekly updates on the blog. Well, I have been busy working on "stuff" and have not been able to do my updates as often as I want. So I thought I would give you a run down on what I am working on.

First up is my buddy Lonnie's Steel Legion that I am doing as a commission for him, delivery date is sometime in July. Basically Lonnie has a huge Steel Legion collection that he has collected from many folks for a couple of years. Most of them were already poorly painted by other people and needed to be stripped to the bare metal. In fact all but 30 of them went into the Simple Green to be stripped. Once the paint was off, I washed all the models (70+) in soapy water to get any residue off and then started to reassemble & base them. This past weekend they all got re-primed black and are now waiting to hit the paint table this weekend. The next part is that I have to fix/repair some of the vehicle models in the lot, which will be easy to fix since I have a ton of vehicle bits.

Besides that, I am awaiting a 2000 point Numdian/Roman army from my good friend Hank Edley in Chicago. I will be assembling and painting this army for a "Classical Campaign" that I will be running at Adepticon 2010. This is sort of a long term commission since I will get to play this army all year leading up to Adepticon and will hand it over to Hank while there. i am looking forward to painting this army, especially since it has a frickin WAR Elephant in it!

I still have a few left over projects that I have been working on for my good friends Mike & Tom. For Mike I still have about 9 Pulp figures to complete for him as well as some Aranica Buildings for Old West gaming. Oh and last night while over at Mike's place picking up my Litko Order, I took home about 12 planes for Check Your 6! to have the decals put on, so today after I get home I will be applying the decals to those.

Tom has a few things still at my place like his Imperial BFG fleet that I have to do the detailing work on, which after reading a book by Jack Campbell called the Dauntless, I was inspired to finish these. Also I need to paint up his Orc army for LotR which has about 70+ figures in it, which will paint up quickly. The only other thing I have is about 4 1/48th scale Tamyia Tanks for Tom. These just need to be built and base painted, Tom will do the detailing like weathering.

Well that's whats been going on & I should have a few pictures of some of this stuff in the next few days, so stay tuned...

TK
Posted by Tim Kulinski at 7:31 AM No comments: