I have had these three Hired hands from Old school Necromunda sitting on my desk for about a year now. To try to deal with my Covid-19 stay at home depression, I figured I would paint up these guys.

Now, as most know, I can paint very fast, but these three models took me well over two days to paint. With everything going on in the world and having to work from home, I am feeling a bit depressed and have no motivation to paint. Our hobby is very much a social one, and the fact we have to stay away from folks is making me loose my drive for the hobby.

So in order to try to get back on the hobby horse I forced myself to paint up these three guys. I really do like the old figures, they have a lot of character. Not sure if I will ever use these guys, but it was nice to finally get them painted up.

Well, I had hoped that this stay at home stuff would cause me to get more done, but that doesn't seem to be the case, but I will try to get stuff done.

I wanted to make sure I was posting every Monday, but real life and some such virus has caused the world to go into shut down. Well I have been trying to keep busy and here are a few cars that I finished last week.

First up a Aristo Rat car that I added an engine to the front, machine guns to the roof and the mesh inside. I really love this car, so much that you can do it and if you go over to Mikes blog, Da Greenskins, you can see what he did with his.

Next up is another Custom 71 El Camino, aka Jet powered El Camino. This one makes number three for me added to the collection. I still have about four of them to work on! All I did with this one was add the ram to the front, added the machine guns to the hood and added the spike to the wheels. I decided to go with a purple and yellow scheme, reminds me of something you might see the Joker drive around in a Batman comic book.


As I said above, I now have three '71 El Camino's completed out of the seven cars I have. Some folks in the Gaslands community said that perhaps Mattel is onto us with these cars, because you don't need to do much with them. Just add a few parts and your all set.

The other car that I have is the Bone Shaker, which I have about a dozen cars collected. The latest one that I did I added the rocket tubes to the steel plated roof but kept the stock paint job on it. I find that I always use this car in demos and I am running them as an Idris team. I just love the rat rod look to the car and it has a huge skull on the front!

Beside the cars, I also have been wanting to build some tire barricades. I saw another Gaslander use Nerf darts cut up to make tire piles and barricades. Well I tried it last week when one of my cats found a dart under the couch. So I cut up about four darts and glued them together. I had hoped that I would not need to base them, but they were just to flexible for my taste. But for using some Nerf darts, they came out very nicely.


So there you go, sorry for the late update, will try to keep up with post during this "interesting" time we are all in.So stay safe people and hobby on!

TK
Posted by Tim Kulinski at 10:24 AM No comments:

Build it, and they will race it!

A few weeks ago while running demos at Imperial Outpost games we cam up with a cool large game concept for Demos. We talked about the scene in Fury Road of the canyon and thought it would be cool to build a canyon to race through. The idea was to have at least a 16' canyon. So I started thinking about how we could do it.

My idea was to take a 2'x4' MDF section in have in a jagged pattern so we could place the canyon walls on wither side. So a couple weeks later off to Home Depot for supplies. Well last weekend I started working on the canyon sections.

I cut basically four sections and then glued down 1"pink foam onto then and roughly cut them into shape with a foam cutter. Then the fun part started of carving the fronts to look like rock, which is very messy. 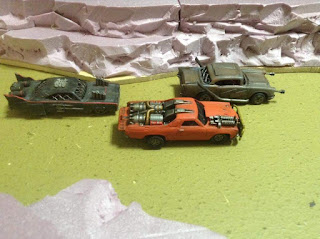 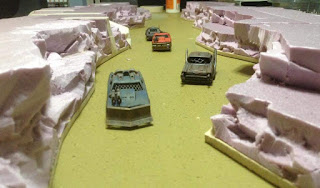 The plan is to use these for more than Gaslands. I can use them for Bolt Action or Flames of War and by keeping the back sides flat, I can place them together for a lager hill. Also I kept each end 8" wide so that they can all line up to make a bigger canyon wall or one side hill.

Here are a few more shots of the carved rock work, which I will say again was a mess and not fun to clean up! 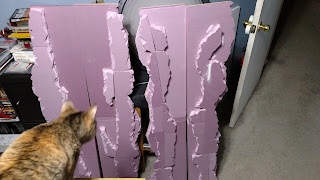 So next up is going to be the small detail work to be done, smaller rocks and dirt, still trying to figure out what I want to do about covering the flat areas, I have used Liqutex in the past, but this is a much larger area and would eat up at lease two jars of it. 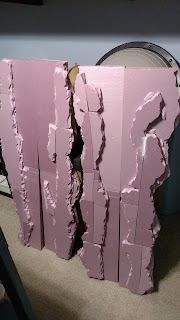 So there you go, a small terrain piece for a few games.

Stripping, not the pole dance kind.

This week I decided to try my hand at stripping factory paint off of the Hot Wheels I use for Gaslands. Up to the other day I just used 150 grit sandpaper to sand and rough up the stock paint before priming. But my buddy Mike from Da Greenskins Blog turned me onto Citrusstrip.

Mike had found out about this magic in bottle from the interwebs and was highly recommended for stripping paint from metal (important point here) models. Do not, repeat do not try stripping plastic models, it eats into the plastic and in some cases will turn said plastic into a glob of melted plastic (may be good for Nurgle players!)

So since I will be doing a demo on weathering cars at the AZ Game Fair later this month, I decided to choose a model to strip. The lucky truck below was chosen and after I disassembled the truck, into the stripping fluid it went.

I placed the truck in the Citrustrip overnight and the next day I could tell the paint was coming off. I carefully used a toothbrush to scrub the body but the paint just came off without much scrubbing. I rinsed the body off (out side into my rocks) and this is what I had below.

After I rinsed the body down, I took it inside and washed it down with warm soap and water to remove any residue that may have been left on the body. I then used a Krylon Camo beige for the car as the weathering effects I will use will show up nicely on the model. I did some basic painting on the bed, grill and rear bumper, but the rest is the beige paint and finally reassembled the truck.

After putting the truck back together and looking at it, I thought that a flat beige color for a real truck would look awesome, I know the current Rat Rod look is to use flat black, but man, I could see using flat beige and blacked out chrome would look nice on the real thing.

So next up is going to be rust and weathering effects from various manufacturers for the demo class, I will post after the class. But I think I found a new stripping fluid for metal models in the future. Now time to strip more cars!

TK
Posted by Tim Kulinski at 7:40 AM No comments: