Time to look back at 2019 to see how I did with my goals. For the most part 2019 was a good year and I feel that I got a lot accomplished. So lets take a look:

AoS - So, the purchase of the AoS box set never happened, in fact I don’t even think the box hit the shelves of my local store. I had hoped that GW would release the one new figure in the box, but that never happened either. I did play a couple of games with Robert, but for the most part, AoS was not a high priority this year.

Frostgrave – Never hit the table, was mentioned that we would like to get it on the table, but nothing every happened and it seems that it’s a dead game.

Shadspire – I was able to completely paint everything for Shadespire, each expansion I bought I got painted. We got in a few games, fun was had, but that was it. I did take it out to play much more and has now gone onto the shelf.

Warhammer Quest – never hit the table again this year, after my brother and sister inlaw moved back to GA, I stopped hosting games. I tried to see if any of my local friends wanted to play, but no one wanted to commit to the game (other then Robert). So back on the shelf it went, I did not even want to paint anything more either.

LotR – Well I ended up trading a Blood Angels started set for the new LotR game, read the rules, pretty much the same but different and also got the Battle Companies book this year. Talked with a few people about playing, built a few models, painted a few models, but no game play as of yet.

40K – Well I had a starting box of a Blood Angel army, assembled figures, bought the codex and command cards, but did nothing with it. 40K just doesn’t do anything for me anymore, I still love the universe, but the game itself just is blah to me. So when Matt was looking at trading off his LotR box set, we swapped armies. I was happy and Matt was happy for about a week then sold off the army! LOL

Necromunda – I bought a Van Saar gang, painted it up and played a few games, I completely painted up my Death Ray Designs set as well as a bunch of scatter terrain for the game. We played a few games and talked about starting a campaign and tried to get at least one more person to play, but nothing more happened with it. Necromunda is best played in a campaign setting then one off games, but that was all we could get played.

Kill Team – Wow, this game has been hot with Robert and I, I think we have well over a dozen games now and only feel like we barely scratched the surface of the game. I have at least Six kill teams, Tyranids (aka Genestealers), Genestealer Cult, Rouge Trader, RT Chaos, Chaos Cult and Death Watch all painted up! Robert and I both love the game and will continue to push this around in the new year. I am planning on doing yet another new kill team, looking at three, Necrons, Plague Marnie’s or Dark Eldar. It really depends if I can find the big starter sets. Kill team does a few things for me, one it is a skirmish game with a few figures, two is played on a smaller board. So, its pretty quick to get new teams and terrain to the table, it also is in the 40K universe so it’s a win for me.

Speed Freaks – Robert and I got this to the table a few times, we each have gangs painted and love the game, it’s a great beer and pretzel sort of game. I got two vehicles painted as well as all my terrain done for it. It’s a great game and is small enough to play a few games a night, once again its set in the 40K universe so that’s a plus!

Space Hulk – Well I got all my figures for the game painted this year, took me a while to paint the bugs, but I finally decided and committed to getting them painted. Now everything is done, but I have not put it on the table, just never had time for it.

Gaslands – Well this has been off and, on all year, I have amassed a large collection of cars (38 to be exact!) and Robert gifted me the new rulebook. I ran a game for our buddy Mike and he became hooked. I have built a few gates and am in process of painting them now. More cars will be modified, and more games are a going to be played. (This week for sure) So Gaslands will be a huge push next year.

Flames of War – Well this was a big surprise, we have played a ton of FoW games this year and I started a Mid War Russian army! For the longest time I was on a break from FoW, but now its something that I am wanting to play more regularly. I see this being played a lot in the new year and as I expand my Russian army.

Bolt Action – I started off the year working on my IJA army which is now all painted, got in a lot of games and have a lot of fun with it. We are talking of doing a Operation market Garden campaign in the new year, so I see Bolt Action being played more this upcoming year.

Fate of the Nation – Saw me getting my Syrian army painted and we got in a few games. I still need to add a few more units to the army, but the local shop is having issues again with ordering items. So when I go to other stores I look for the units I need. Not a huge push to play, but at least I have a painted army ready to go.

Cruel Seas – Well got everything I have painted and ran two games with Robert and Mike, we all enjoyed it, but other than that have not done much with it. Once again, our local shop is not carrying Warlord products, so have to go elsewhere to get items. It may return to the table in 2020, we shall see.

Fistful of Lead – Got in a few games with Robert, but the big push was hosting a multiplayer game of FfoL Horror on my birthday. Painted up everything for the game and had 6 folks playing in which all had a blast playing. FfoL will be back in 2020, but I will be doing this as a group game going forward.

Pulp Alley – About all I did for Pulp Alley was back the kickstarter for the 2nd edition book. Wanted to get it to the table but sadly it didn’t make it. I am planning on doing a group game in 2020, so at least I have plans for it, but other than that may be a sleeper this year.

Black Powder – Well, Robert and I talked about getting this back on the table and I had hoped to add more to the armies I have, but it never made it out. We have talked about doing another game in 2020, but right now its just really Robert and I working on this.

Purchasing – There were many purchases through the year from 40K to Hot Wheels. I had done a previous post about limiting the purchases in 2020, but lets be honest, that will not happen. My wife has already told me that in January we will be doing our Christmas shopping for each other, so that will mean I am buying in 2020.

So, once again 2019 was a very productive year and I got tons of models painted, games were played and plans were made.So stay tuned for

So, a few months or so ago the Gaslands Refueled book was gifted to me from my buddy Robert. Basically, the rules had the errata and extra stuff from Time extended added to it. It was awesome to get the gift as I had the original book and could always print off the extra stuff. 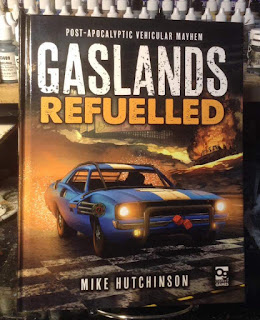 Well, another buddy, Mike W of Dagreenskins blog took an interest in the game as well. I met up with him and ran him through a game to show him all the gasoline glory that is Gaslands. He was hooked. He bought the book and went out buying cars like crazy.

With Mike taking an interest, it has filled up my tank for Gaslands as well. (Always good to have someone to play games against). So I just went out and bought about a dozen cars, which I really did not need and am planning on building a board for it. I have also joined a local AZ Gaslands FB group and Mike and I are planning on doing a Car Swap meet day at our local shop where other Gasland folks can meet up, talk shop, swap cars and play a few games. 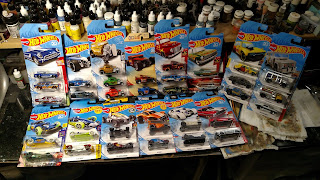 One interesting thing that I have noticed with Gaslands is the fact everyone that gets involved goes nuts in buying Hot Wheel cars and who could blame them, at .99 cents a car its not bad spending $10.00 for a bunch of cars compared to other companies’ models. I know for myself, it is a touch of nostalgia of being a kid and playing “cars” in the back yard. What kid didn’t do this and “shoot” the other cars?  It also harkens back to building race tracks for those cars and having a great time with them. As a side note, the toy manufacture Mattel has seen an increase of sales from Hot Wheels, I am sure its because us crazy gamers are buying tons at a time!

So it looks like 2020 will see me out in the wasteland racing a few cars for the glory of going to Mars!

TK
Posted by Tim Kulinski at 4:40 AM No comments:

I need a change here on the old blog, going for something a little different, hoping this will allow me to get excited about blogging again. One main part for the lack of posts is primarily I use my Ipad and the blogger app for IOS is not that great. In fact it sucks and I am rarely using my laptop anymore.

So I am going to try to get more content up here and see what the new year has in store. But first up lets change some things up starting with the layout and colors!