I spent this weekend getting paint on too my new Van Saar gang for Necromunda. This is my gang and I had said when they come back out, I was getting them. Well I did and spent about 12 hours building them. Now since I had the older metals fully painted, I decided to paint these new ones up very similar to those so I could use them to mix in if I needed more for the gang.


Well seeing how I painted the older ones well over 15 years ago, I got pretty close to the original scheme. I may take my older models and change their bases to the newer style to get them to blend in better. I also may go back to the older ones and paint the faces like I did with the newer ones. After reading the new back story, the Van Saars suffer from radiation poisoning due to some of the machines that they covet. So I went with more of a paler skin tone as to make them look more sickly as if the radiation was effecting them.

All in all I like the look of the new models, as I mentioned before, they have a very Infinity Nomad feel to them and still feel like the older models. Now I just need to get them on the table to see how well the perform.

Van Saar on the Work Bench

A quick update to the Necromunda, I ended up picking up a box of Van Saars on Saturday and started building. Now one thing I will say, these kits are awesome! They are also true model kits that do take some time to assemble. In fact, it took me about an hour for each model shown below, so about three hours of work. The figures are so complex that when I first saw them I almost pulled out my old metal Van Saars and said forget it, but I pushed on.


Now one thing I noticed while assembling these figures is that they looked very familiar to me. Now they did not have the same old school look, but something newer. Then it dawned on me, these figures look very similar to Infinity Nomad models! Take a look.

Anyway, that gives me hope to possibly some of my larger Nomad suits for Van Saar Brutes, so we shall see.

Posted by Tim Kulinski at 12:55 PM No comments:

The More you try to get out, the more they pull you back in!

Games Workshop has done it to me again, either they are really good or I am really weak, but here is what I did yesterday!
So ever since GW released Necromunda, I have been keeping it an arms length justifying to myself that I did not need it. GW already had me back with Bloodbowl and I thought I could stay away from this one. Drunkensamurai had picked up the game when it came out and was pulled back in and we played a few games and I loved it. But I rationalized to myself that I would allow Drunkensamurai to pick up the game and I would stay focused on Bloodbowl and keep up with their releases. 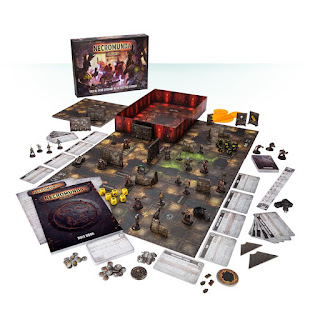 So, hopefully my local store will get a restock so I can pick up my gang, so I guess the saying about trying to leave is true, they keep pulling you back!

Man I am weak!

TK
Posted by Tim Kulinski at 6:06 AM No comments:

I have been bitten by the Gaslands bug and started modifying Hot wheel cars for this Post Apocalyptic car game by Osprey!

Gaslands by Osprey Publishing is a post apocalyptic setting where earth is now a desolate waste land after a war with mars. The folks left on earth get to participate in the Gaslands TV show for the entertainment of their martian overlords. The winners get to leave earth and live on mars, in theory anyway.

The nice thing is that the rules were written to use Hot Wheels or Match box cars, which are 1/64th scale. I had picked up the rules when they came out and put them on the shelf until recently when I talked to my buddy Mike G about the rules, as he had purchased them as well.

Well with my rekindled interest in the rules I went out to good old Wallmart to pick up a few cars. I spent a whole $10.00 on ten cars to use for the game. Now the good thing is that you can either use the cars right out of the packaging or you can modify them, this system dosn't use the WYSIWYG (What you see is what you get), its just really whats on the dashboard card that matters. But being a gamer of many moons, I could not resist the urge to modify and repaint my cars!


Now, I have been watching a few Youtube videos of folks modifying their cars and most people disassemble the cars by drilling out the rivets on the cars. So I figured why not try it, after all if I messed up I could always go and get another car for .94 cents! So I grabbed my drill and the correct size bit and started drilling, taking it very slowly as I was only holding the car in my hand and not using a vice to hold it. It only took about a minute to drill out the rivet on each end of the car and once that was done the car came apart without any issues.

Next up I wanted to scratch up the factory paint, I had watched a video that used a file to put marks and scratches on the car. this set took only a few minutes and I could have probably done this with the car fully assembled, but with just the body it went pretty quickly.

I then dug out my Flames of War bitz box and started looking for interesting parts to add to the car. I added two Russian MG's from my box as all I wanted this car to have is two MGs as it had only two slots for weapons per the rules. I also added a few gas cans and boxes to the bed of the vehicle and added mesh screen to the main windshield. I then found two pieces to add to the side windows to make it look more armored up. The hardest part was trying to decide what to put on and how much to add to the car, in the end I went pretty simple with just a few additions.


I then glued the car back together and shot the whole thing in a red primer color I had in the garage. Once that dried, I then painted on Reaper black in thin coats so that some of the primer red showed through. The engine, header pipes and rims got P3 Pig Iron on them. I then did a dry brush of Reaper Grey Stone to highlight all the edges of the model. I also painted the skull on the front with Reaper Skeletal Bone as well. I then used Army Painter Strong Tone on the model to darken it up and let it dry thoroughly.

Once the wash was dry, I went back and added Vallejo Environmental  Rust Texture in places and also used Pig Iron again on scratches and wear areas. I then dry brushed Americana Desert Sand on the lower areas as well as the tires to finish off the model.

Total time from start to finish was maybe two hours of work and paint, so pretty quick really. Total cost on this car was only .94 cents, that is an awesome price for a game piece. I have about 9 more cars that I need to start working on, I just bought some plastic tubing to add header pipes and other misc stuff to the cars.


So welcome to Gaslands race fans, lets see what other cars my mind can create!