It has been a while since I posted, I need to get better at that, but it is funny how life gets in the way of hobby stuff. Any how, tonight I am doing a little review of a supplement for Pulp Alley. Now, before I get started on the review, I have to inform you folks that I was given this supplement free and that I also helped with a couple of the scenarios for play testing, so I may have a slight bias. I just wanted to get that out there so folks know where I am coming from, now onto the review! 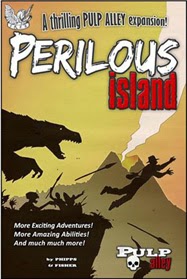 So, what is Perilous Island anyway you ask, well glad you asked. Perilous Island is the first in many supplements for Pulp Alley and is written by David Phipps and Robert Fisher. Perilous comes in at 45 pages and has the same great layout as Pulp Alley. The first 14 pages cover some new rules (Weird & Amazing) as well as some new abilities and perks. The neat thing with the new rules is that you can do some pretty cool characters and Terrors (which can be super bad guys). The Terrors rule allows you to build a wide variety of bad guys with cool abilities which are able to take on whole leagues. Picture the Mummy, Kong, Dinosaurs or any other super cool creations. Another new rule is the Bursts, which uses a cone shaped template that can represent anything from machine guns, explosions, a swarm of bugs or some sort of magical blast. The nice thing is that the rules allow you to use them how you want.

The rest of the book is dedicated to the Campaign, which is set up as three acts which has 11 scenarios that are all linked together. The basic story line is that you are hunting for a lost perilous island. The scenarios can be played either as stand alone games or all linked together. I got a chance to play the Soeraba Manhunt and Lagoon of Terror during play testing.All the scenarios have special rules that lend themselves towards the campaign.

The last section has some sample Leagues (which are your teams or crews) and it is nice to see how you can use the new rules for other games.the last page has the templates for the bursts which are either a 3" round burst, a short teardrop burst or a long tear burst template, once again allowing you to use them for which ever best fits your game. 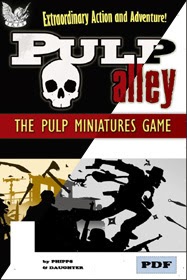 Now I just need to get a few more figures painted up and drag a few of my game buddies over for some Perilous Island adventures. On a side note, I am looking at taking Pulp Alley to Adepticon 2014 for a few demos, so if you have not tried it and your heading to Adepticon, look me up for a demo game.

TK
Posted by Tim Kulinski at 10:44 PM No comments: