I'm back from Adepticon and I think I am all caught up on my sleep, it was a great week of games and friends. So what did I do?, Well thanks for asking. My Adepticon trip started on Wednesday the 18th at 5:00am, that's when I had to head to the airport. Let me say that traveling with your figures is always interesting and you do get a lot of interesting questions about them.

Needless to say I got into Chicago around 3:00pm and once I got my luggage stowed, I headed down to help out where needed. I ran into my buddy Jamie and joined him stuffing bags for the event. We caught up with what was going on in our lives and what we had been doing hobby wise. After about two hours of stuffing we traded out with a few other luck volunteers and headed over to set up the Historical rooms. Once we got the Historical rooms set up it was time for me and my buddy Merle to find some dinner, which we ate at Sam & Harry's for a expensive Ribeye steak, it was awesome but pricey.

Thursday morning saw me up early at 6:30 to start setting up the Legends of the Old West game that Merle and I were running all day. We ran the Little Big Horn game in the morning and then set up for the two games of Battle at Tandywine Gultch, which was another two games of LotOW. Everyone that played had a blast and I even got to meet up with a good friend "Evil Kevin" who used to game with us in Phoenix. Needless to say I was busy from early in the AM until later in the night. Day one completed.

Day Two of Adepticon saw me playing in the Bolt Action team event. Now as some of you may know, two days before I left for Adepticon I decided to paint up a new 800 point force for just this event. I painted 41 models in less than two days and had them ready for the event, in fact as soon as I opened up my figure case, the familiar smell of Testor Dullcoate greeted me. (Maybe this is why TSA wanted to know what was in box? Hmm) Well the night before the guy that I was to team up with canceled and I was left with no one to team up with. Good thing we had odd number of teams because that meant the the tournament organizer, Jeremy  and I would team up together. I played three great games two against friends that I know in the Chicago area.

All in all it was a great time, John and Aaron, our first game was a blast and this was the second time I got to play John from Plastic Legions.Since Jeremy and I were playing as the ringers, there was no pressure to win. It was actually nice to just be able to enjoy the game and not worry about running the event.


After the team event I wondered around and took in the vendor hall and watched a few other games and demos. I also met up with more friends and went to dinner with Jay, Suzi and Justin at a local micro brewery called the Ram (I think). Day two completed.

Day three started much like the other days, early. Merle and I headed out to find breakfast and ended up at a Doughnut shop that doesn't seem to make doughnuts. Saturday was basically a free day until 1:00 when I ran a Pulp Alley demo game. So I headed over to the huge pirate game and wandered around the vendor hall again.
So today was the day for the Pulp Alley game and I wrote up a scenario called Over due book Hunt. The basic concept of the game was to find the Book of the Dead and up to four players could play. I provided everything for the game and had a nice little table set up for the game. In fact I had a bunch of folks come by and watch the game and take pictures of the table. Just FYI I shipped the terrain all out to Chicago from Phoenix.
I had four people scheduled for the game and only three showed up, but as I said a lot of folks stopped by to watch and ask questions about the rules. The nice thing about Pulp Alley is that once the players played a couple of turns they had it down and I could talk to folks about the game. It was a success and will take the game back to Adepticon next year.

Saturday came to a close and I was invited out to the bar with John, Aaron, Eric and a few others. needless to say it was another late night of spending time with friends.

Sunday came early and Merle and I headed out to Breakfast with Mark and Orge. It was awesome doing breakfast with these fine gentlemen and once again it is another reason I enjoy going to Adepticon, the friends. Once back from breakfast I got pulled into a Free blades demo game with John at DGS games. Played a great game and then bought a few figures for DGS to run some demos of Freeblades here in Phoenix. I then met up with Rich, Merle and Mark to play a game of Hail Caesar with Rich's Crusader army and Saracens.

Once this game finished up I head back out to the vendor hall and then started to start breaking stuff down since the con ended at 4:00. Once we got a few rooms broken down I headed up to my room for a quick nap. Sleep would not come so I watched the snow fall outside my window. I then headed down to the bar/restaurant to hang out with the DGS crew (John, Matt, Merle, Ogre, Madlin, Chris and a few others. It was another long night and I headed up to my room to pack and get ready to head back home the next day.

When I awoke Monday morning, it was still snowing and there was at least 5" of fresh loose snow on the ground. Merle drove me to the airport and a short drive of 23 minutes took over an hour. It seems the folks in Chicago don't know how to drive in the snow! My flight was scheduled to leave at 10:55am but we didn't leave until noon thanks to the weather delays. I finally touched down in Phoenix at 2:00pm and was thankful to be home in warm weather again.

So my trip was a huge success and I got to spend time with a lot of friends, I highly recommend that if your thinking about making the trip that you go. I had thought after I got home that this would be the last time to make the trip, but after thinking about it, I will go back. It wasn't the games, it is the friends that I have made over the years that keeps me going back. And next year will see me participating in a large, cool, awesome game and because of this one game I will have to go back.

By this time next week I will be in The Windy City for Adepticon, one of the best gaming events in the country. I will once again be attending this awesome event and I am running a few games with friends and taking I all that there is of Adepticon.

For the last few weeks I have been painting like a mad man to get ready for the Legends of the Old West game as well as the Pulp Alley game. I will also be floating around taking pictures of the event for all those that can't make it.

So stay tuned for Adepticon coverage.

It has been a full two frickin months since I posted, what the hell?? Well, just because I have not posted doesn't mean I have been lazy on the game front, I have been very busy. So what have I been up to, well for one thing, January 2nd I sent in my manuscript to Winged Hussar Publishing to publish HEROIC, a generic historical skirmish game. Right now I am waiting to hear back from the publisher for re-writes and additions to the manuscript. So yes folks, there is going to be another set of rules published by Tim Kulinski, fans of my previous work will appreciate the rules and I plan to be supported and release updates for said game. Once I have the working copy I will post more on this. I also have another set of rules that I am working on with a partner for the same publisher that will be an Air Combat game with a working title of either ACES or Legends of the Sky. So you may see some updates here about that as well as some play testing here, so stay tuned.Now I am also working with the fine folks at Pulp Alley for a possible supplement for a very "Scary" book. I will not go into much more detail than that, so stay tuned. So I have been busy writing a few things.

Now I am also getting ready to make the trip to Adepticon in a few short weeks, and I have been painting up models for the Legends of the Old West game I am assisting with my good friend Merle, aka Mother". Here are a few pics of stuff I have done for this game, these are for "Mother" and all of them are Foundry figures. 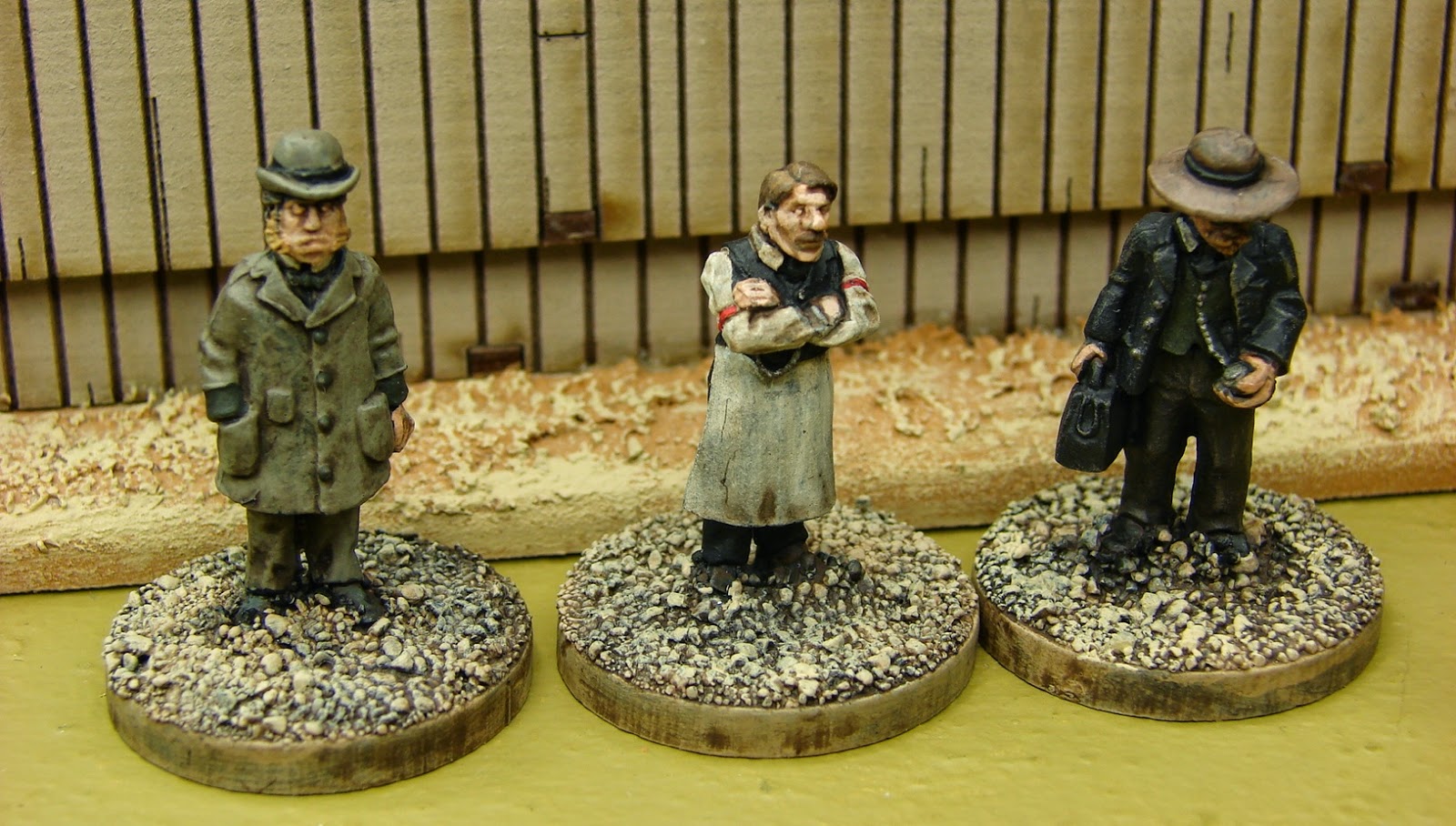 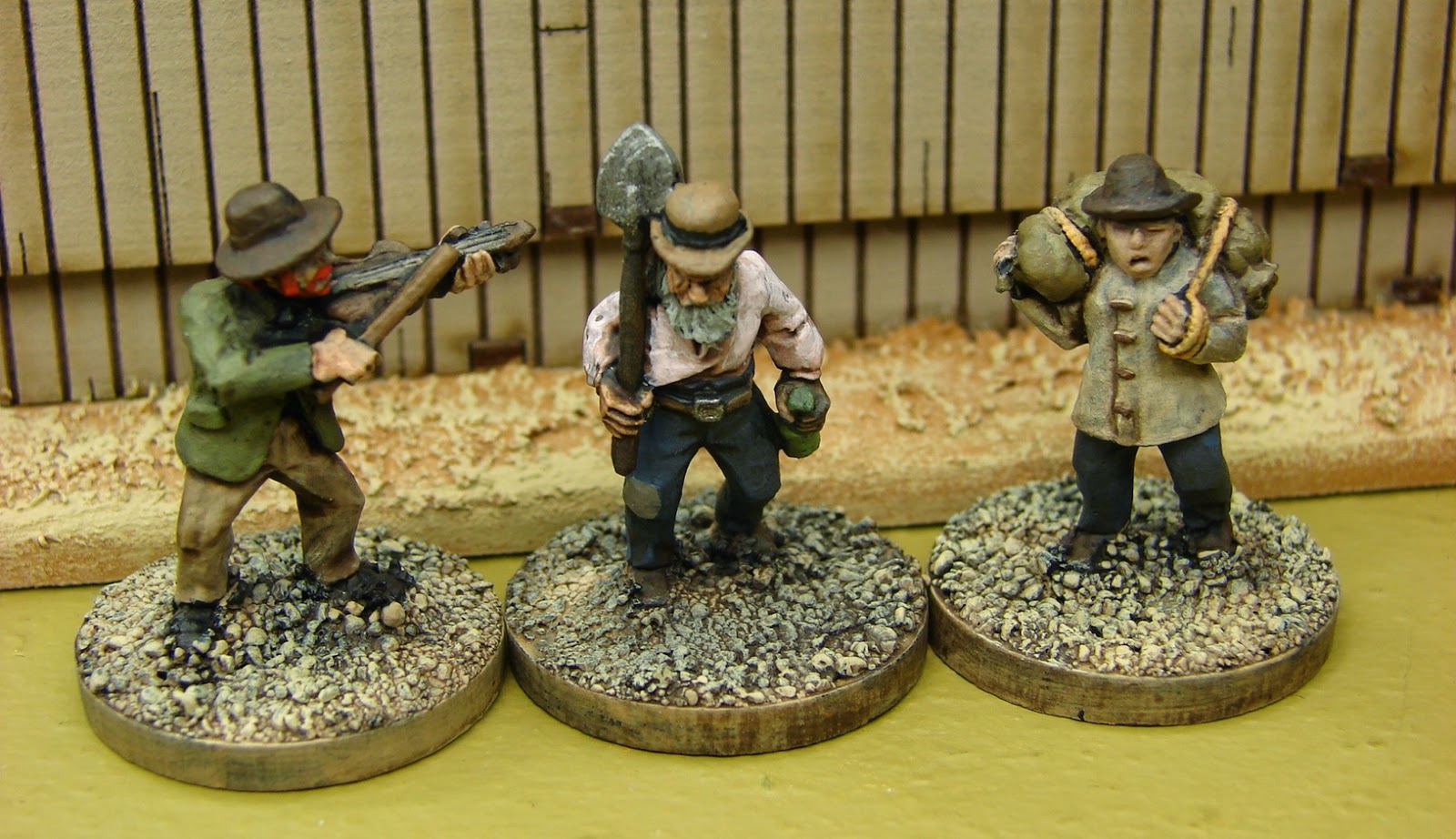 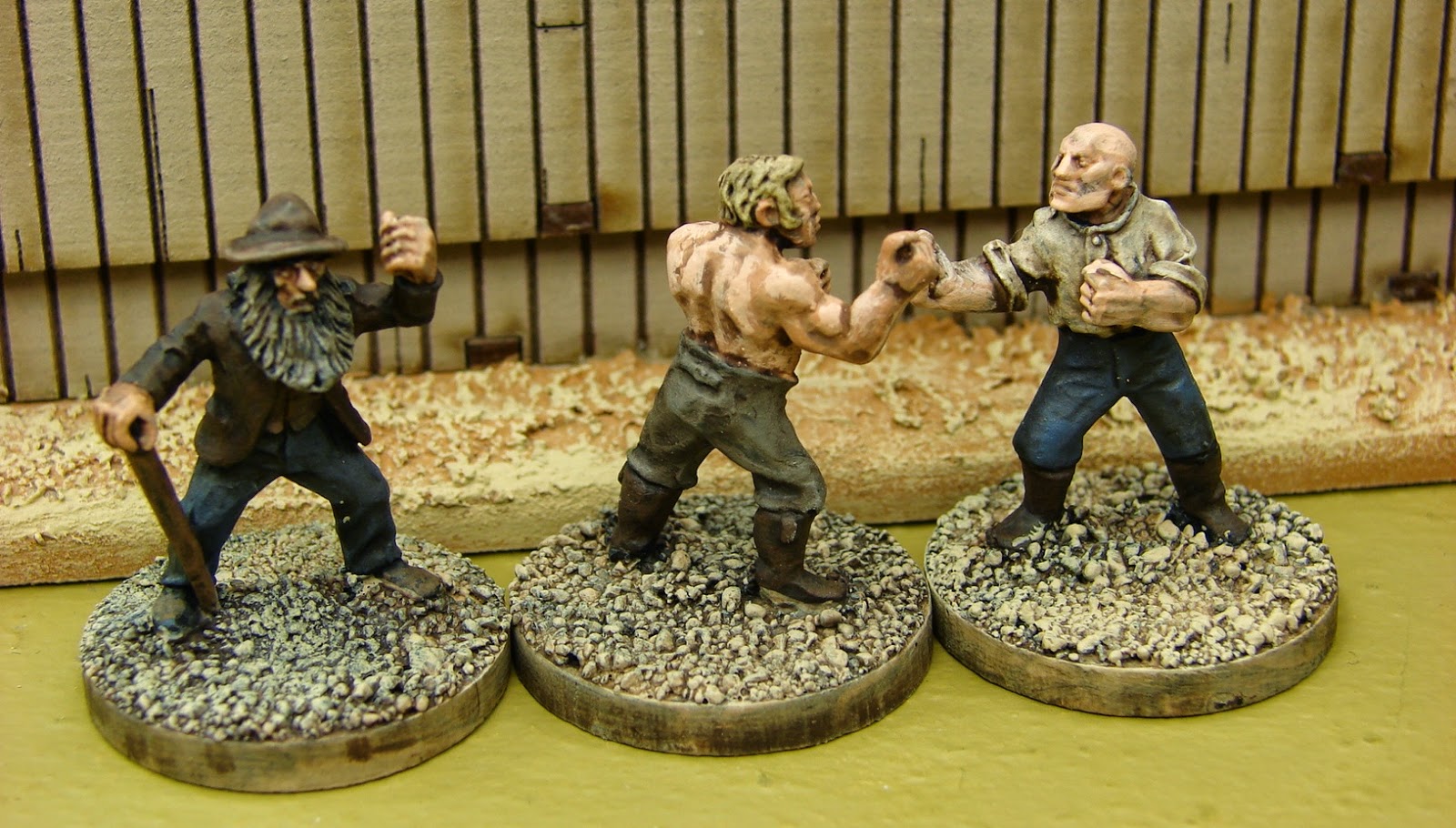 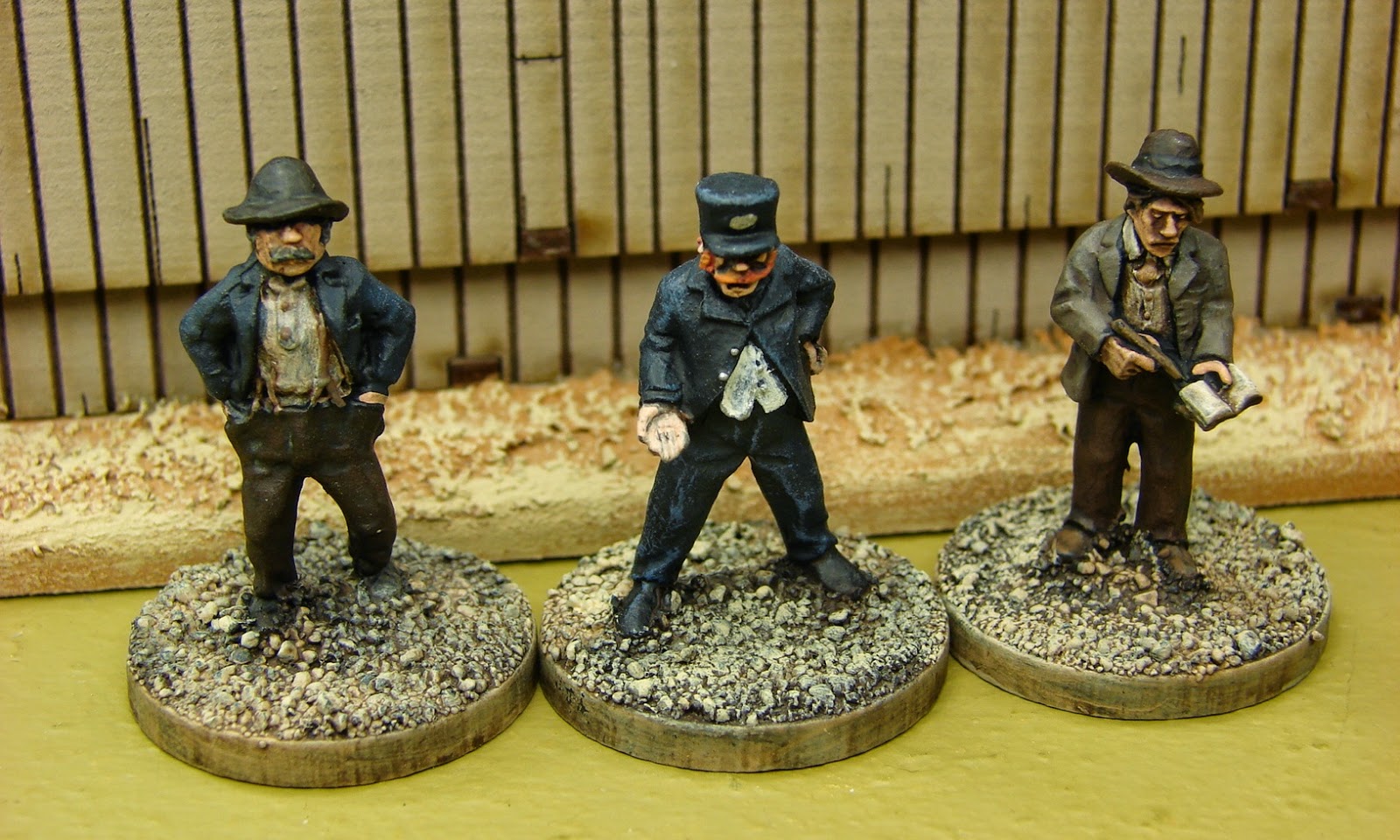 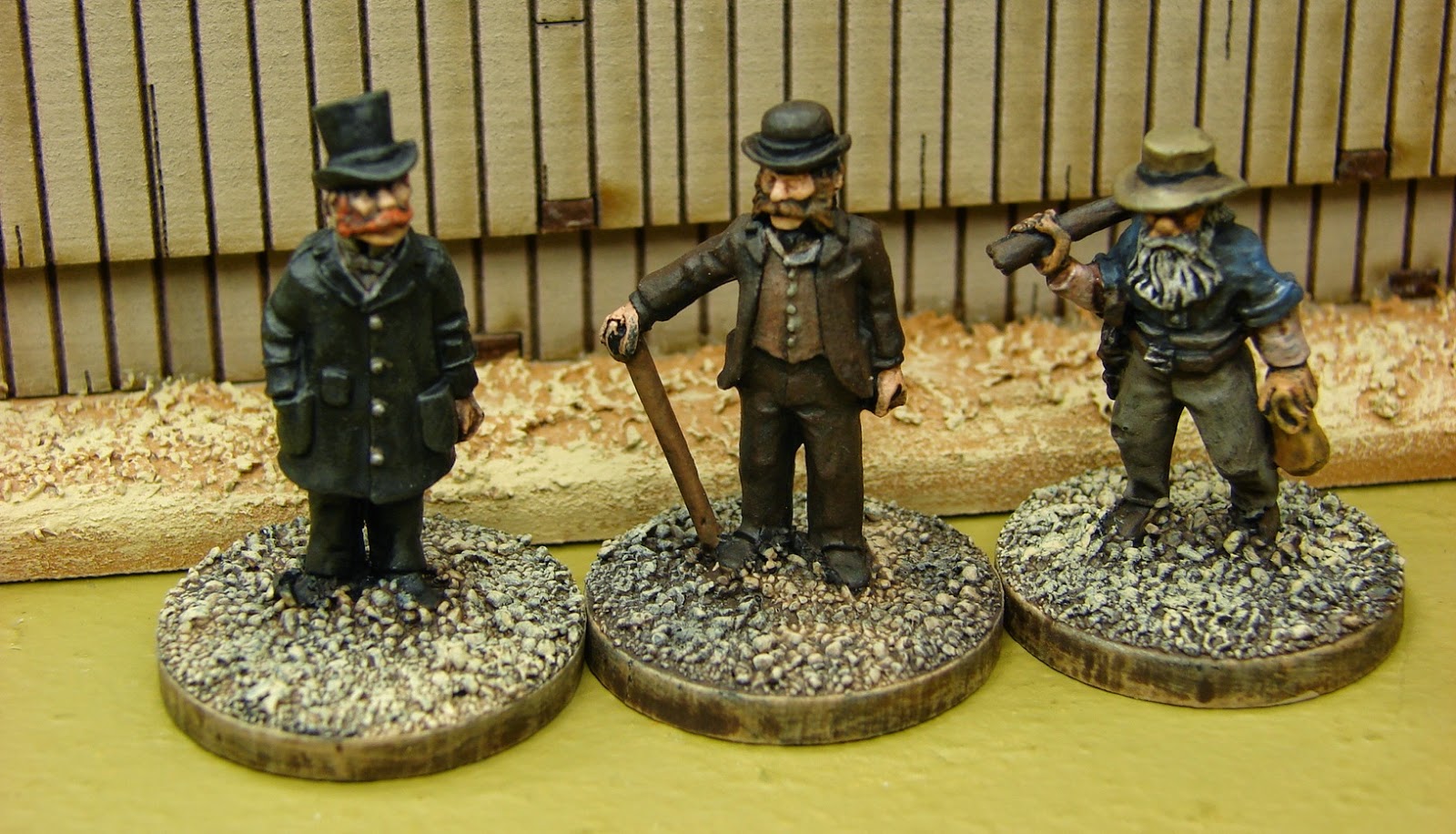 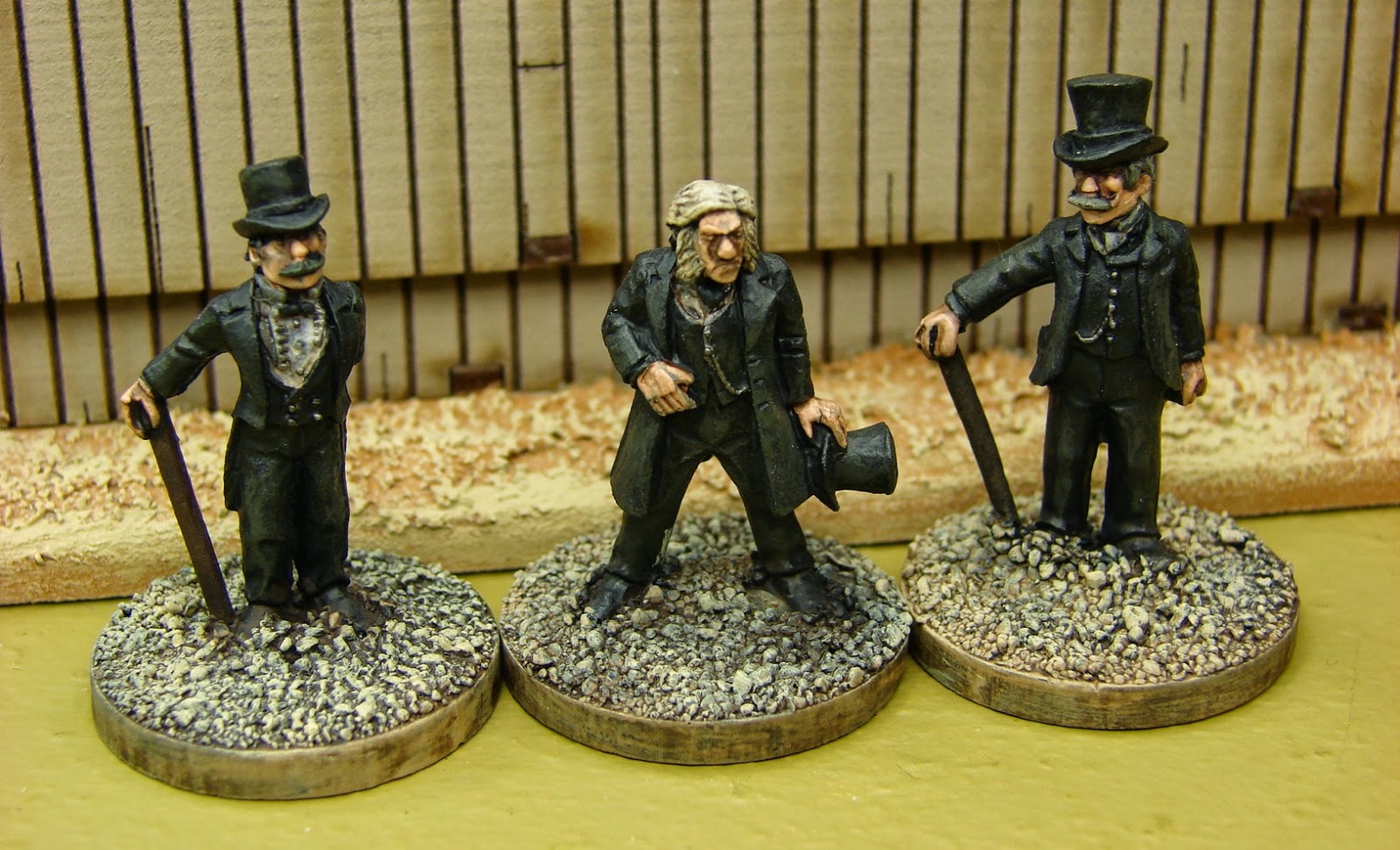 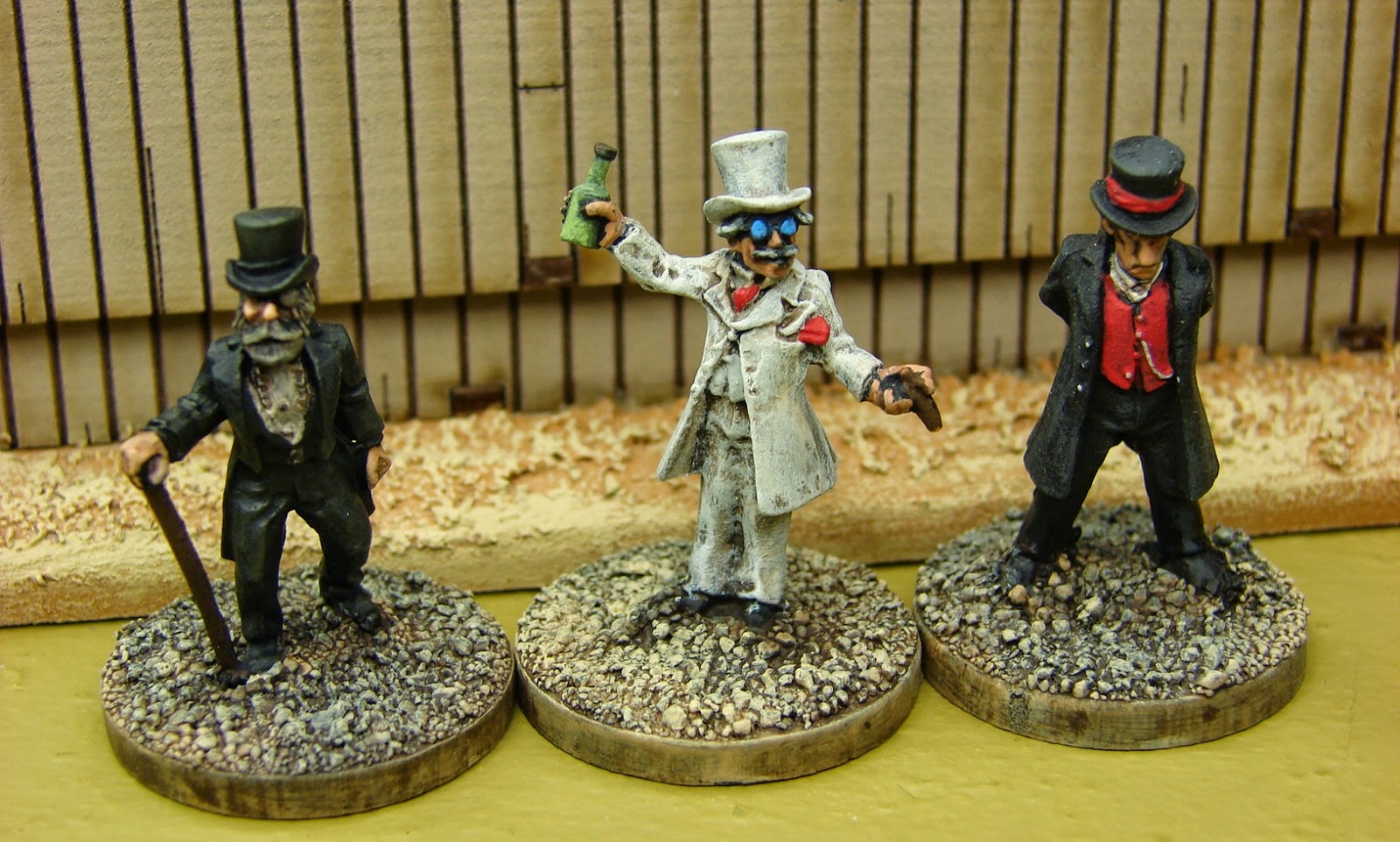 In addition to the above figures, I have also been working on figures to supply for folks to use, all of these are Gorgon Studios figures that I got last year from my buddy Hank who runs Gorgon. There are a few figures that have yet to be released yet. 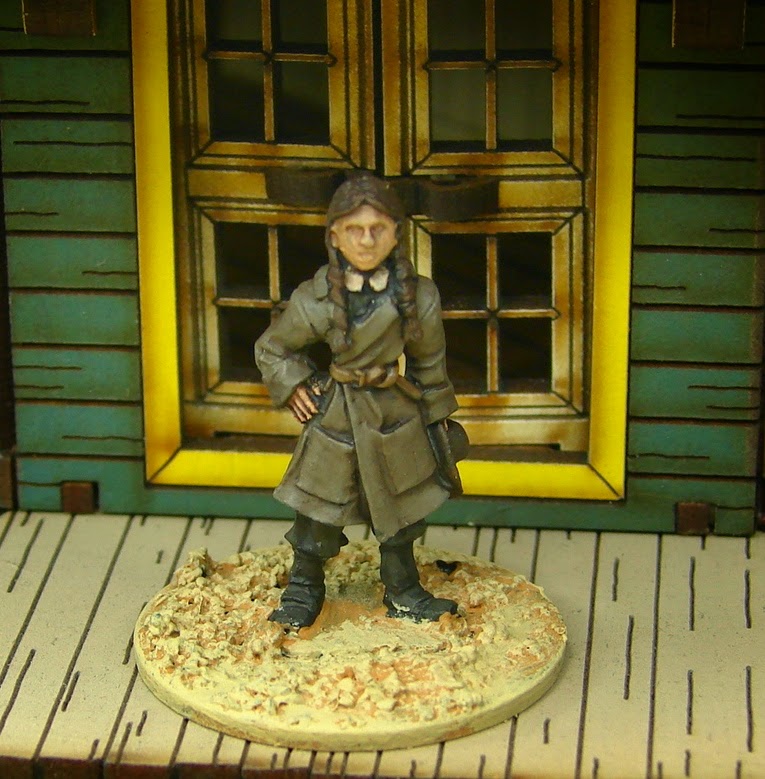 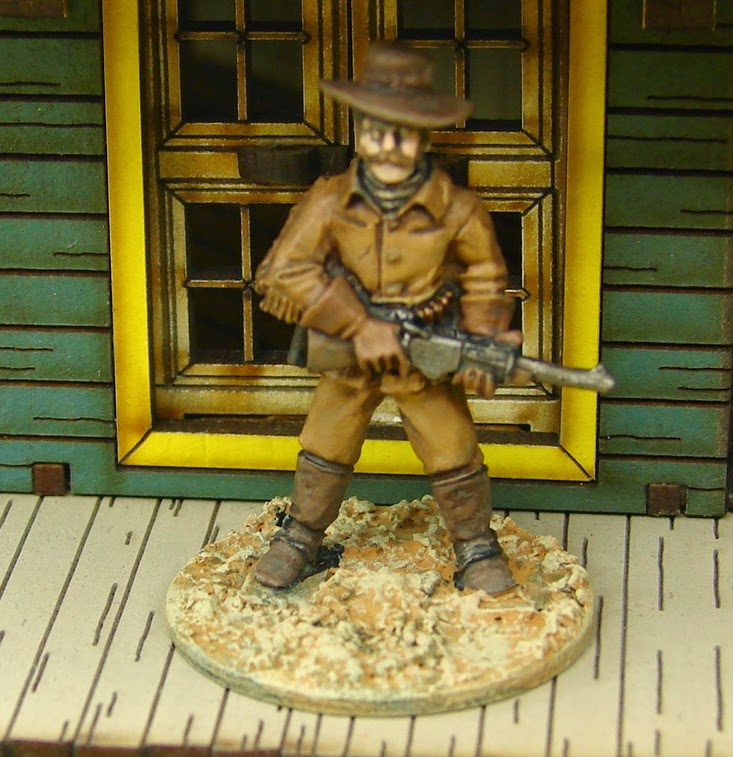 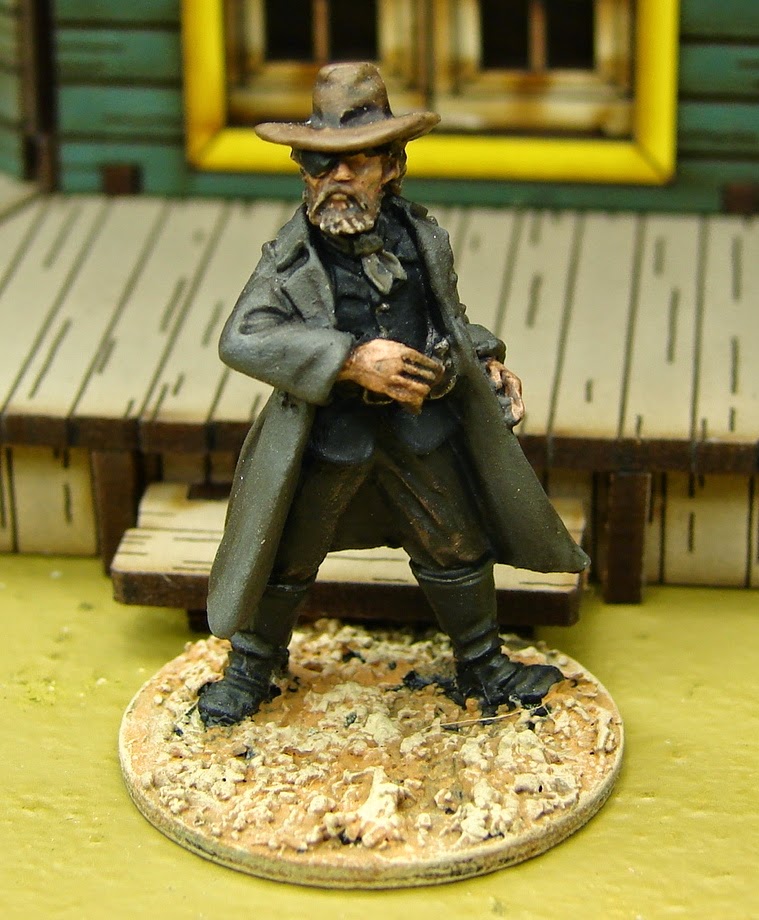 Besides the Old West game, I am running a Pulp Alley game and have had to paint up a couple of Leagues for the game I am running. Here they are:
And lastly I have gotten back into another hobby, Model Railroading after a 17 year absent. I was going to jump into N scale but after pricing items, I just went back into HO. I am finally building my layout inside of the house like I originally planned 15+ years ago. It will be in the game room along with my 4'x6' game table and paint desk. It is a  L shaped shelf layout that is 8'x15" wide by 7'x6" long. It will be based on the Southern Pacific Railroad in the mid 1990's and based off the Anaheim Branch line that I used to haunt all those years ago.

After negotiating the space I contacted my good friend Bill Meyer in CA to construct the modules and after a trip out to CA to pick up said modules (and operate on Bills Layout) I had the beginnings of my layout. It will be a long term project that I will document here on the blog. So here is the beginnings of the layout.

So there you go folks, I have been very busy but I will be making more regular updates here in the future.