So about two weeks ago after a game of Bolt Action, Robert & I were talking about some of our projects that we needed to finish up for our German armies for Bolt Action.

I had 4 vehicles that needed paint, so I decided that I should finally get painting on these. So first up was a Warlord 251 with PAK 36 and a Rubicon Hetzer. For the Warlord kit I went with a very simple strip pattern over a German Yellow (Middlestone) color. The Rubicon kit was a bit more time consuming as I did an Ambush scheme.

Just an FYI, these are all hand painted, I did not use my new airbrush on these. The 251 painted up pretty quickly, but the Ambush scheme took me about 3 hours of paint time to do. The hardest part is doing the dots and trying to make them random. Human beings love patterns and trying to do a random pattern is very hard.

Next up was a Rubicon 250 and Stug G from Rubicon as well. The 250 got a variant of the German three color scheme that I sponged on as I wanted it to look like the crew did it in the field. The Stug G was a simple two color scheme that I copied off of a 15mm Stug I did for my FoW army years ago.

So there you go, four new vehicles for my 28mm German Bolt Action army, these took way too long to get to the paint table, but now they are ready for action. 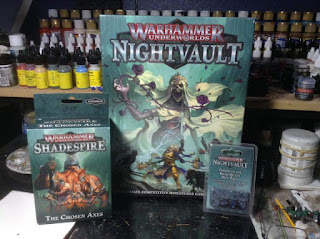 So at the end of last year, Robert & I got to try out Shadespire Underworlds, as he picked it up and been wanting to try it out. Well we both loved it and with that I decided that I need to pick it up myself but all I could find was the second season of Underworlds. So I picked that up as well as a few expansions. And at Christmas I received the first season.

So here are a few pictures of the completed figures for the game, I just have to say I really love painting up a few figures at a time. First up are the Stormcast and Cursebreakers, I really do not like the way GW and most folks paint their Stormcast models, I do not like the Gold and blue scheme. So for mine I went old school Middenheim colors of Red, White and Steel, a very White Wolf scheme. I have played with the regular Stormcast models and they are absolutely rock hard.

Next up are the Chaos Reavers, these were fun and easy to paint because they half clothed. I also went with a new basing color scheme that looks nice for a blasted wasteland look. I have had a couple of opportunities to face this band and  am not too impressed by them. But then again they were going up against the Strormcast.

I picked up the Skaven set for my son, as he really loves playing Skaven. I have not tried playing them yet and honestly have not looked at the cards yet, but I have them now.


Much like the Skaven, I bought the dwarves for my brother to play and these models were quick to paint up, the toughest part was their hair as it has two washes on them. I have played these Dwarves once and they are very different then the Stormcast. They are all about capturing objectives and looking for gold.

So I am excited about this faction, the Nighthaunts and used a similar paint scheme that Robert used on his AOS army. The models all have great character and I may be playing these guys in the very near future.

I have the Night Goblins on the paint table now and I am working out a trade for the Skeletal force, as they look cool to play and to paint up. So ther eyou go, my dive into Shadespire Underworlds.

Posted by Tim Kulinski at 8:39 AM No comments:

Okay, so time to set down some goals for my hobby for this year, as always, it’s a great way for me to see what I did not do. Maybe it should be 2019 Fortune Cookie Goals. So here goes:

Fantasy – Well I plan to continue playing AoS and I have decided that I will focus on learning the rules better as well as understanding my army, the Flesh Eaters. And as of writing this, GW has announced that a new box set is coming out to feature Skaven and Flesh Eaters! Hopefully that will mean cards for units and a updated army book! The new box set looks like more of what I have already except for a new Abhorrent King model, but I am sure there will be cards included. I have already reached out to a local Skaven player about swapping out my skaven stuff for his Flesh eaters stuff.

I would still like to get Frostgrave onto the table, Robert & I really like the game, but not many of our other friends do, so I may have to come to terms that it will not hit the table, but I will still try to get it there.

Shadespire was bought and played last year and I purchased a few more expansions for it, so this will continue to be played in the new year.

Warhammer Quest will still be played this year, my goal of having almost all the models painted is almost there. And my local players are really digging playing this old school dungeon crawl game, especially when I supply it all.

I have been asked about Lord of the Rings and if I plan to get the new rules. The reality is that only Robert, my son & I still play or have stuff. The fact is I still have all my old books and a few armies left, if I do anything with it this year, it will be using the older rules in one of games here and there.

Sci Fi – Well at the end of last year I decided to get back into 40k and bought my first Space Marine army, the Blood Angels. I got as far as getting the start collecting box assembled as well as the Space Hulk terminators painted (which caused me to buy the start collecting box). So this year I want to get the game to the table, I know Robert is waiting for me to ask for a game, which may be within the next few weeks, so it looks like 40K is back.

Necromunda was another last year sleeper that took us all by storm, I see this being played more this year as well and GW announced so new models coming out as well as weapon packs for gangs. I also need to get my Death Ray Designs wall set painted, so that Robert & I can have a truly large set up for Necro and for Kill Team.

Robert for Christmas bought me the Kill Team rules, so the plan is to play that this year, I would like to use my Death Ray Designs walls for some games which fits with GWs announcement of kill Team Arena which looks like Kill team on a Necro board. So I may be buying that game when it comes out in the near future.

I also see Speed Freaks being played from time to time as Robert and I both have everything painted for it, I see this as more of a side line game or drinking game. In the same vein, I have Gaslands and would like to get this to the table this year as well. I just need to figure the rules out and start pushing it around the table.

I would also like to get more games of Space Hulk to the table, the terminators are all painted, and I need to start working on the Genestealers for the game. My problem is I need to decide on a paint scheme and stick with it, hopefully I can have a fully painted Space Hulk game by the end of 2019.

Modern – This covers stuff like Bolt Action and Flames, so with that being said there are a few things I want to get done this year. First being Bolt Action, I just finished painting my 1500 point IJA army and I want to get it to the table as well as add a few more items to the army. I also want to do some sort of campaign with Bolt Action. Robert and I just bought the Operation Market Garden book so we will be looking at doing that sometime this year.

For Flames, at the end of 2018 I purchased a Syrian force for Fate of the Nation, so I would like to get that to the table as well as get all my tanks painted for it. I also would like to include a few more items for the army as well.

I would like to get Flames of War to the table again, I really do miss pushing my tanks around my North Africa boards, so I will try to get that back to the table.

Historical – This covers just about anything not covered above. I want to get my ACW stuff back on the table for Black Powder, Robert & I both have tried BP with a brigade or two to a side and it was great fun. So, I would like to use what I have painted.

Fistful of Lead will be back on the table again this year, I will be running a few demo games at AZ Game Fair, so this should be easy to accomplish in the new year.

Cruel Seas was purchased at the end of last year, so I want to get it onto the table this year. I have the starter set, just need to assemble and paint and should be smooth sailing.

Pulp Alley is always on the list for doing, although its been missing for a few years, but I would like to get it back onto the table this year as well.

Purchasing – There are many items that I have my eye on and it looks like GW will be getting the most of it yet again, all I can say is I will try to stay focused on what I buy.  But as any gamer will tell you, its hard to stay focused with all the new shiny things coming out. But in the very near future will be items for AoS & 40K.

So there you go, my plans or Fortune Cookies for the new year, we shall see what happens…