So my local store will be running a one day Blood Bowl event on September 29th, 2018 called Grumble Bowl! They are wanting to make this a once a year event and I have always wanted to play in a Blood Bowl Tournament, so here is my chance.

I pretty much decided that I would run an Orc team and it would be a great chance to bring out my Azog Ardinals team, the only time they have been out was Taco Bowl I, which was earlier this year that I ran for a few friends. My Orcs were run by a friend of mine, Derek Rider. He did very well with them getting Mr. Assassin award, although he was playing against a elf team to get all those casualties!

Any way, I decided that the Ardinals would make another appearance for Grumble Bowl, but I needed to finish off the team. Now when I started the team about a year ago, I had plans to make a few extra models for the Coaching staff, so I dug through my unpainted minis and found a few models to use for coaching staff. First up was a Savage Orc Shaman that would be great for an apothecary,  no real conversion work, just painted him up in the Ardinals colors. Next was the cheer leader, which was a Savage Orc musician that I converted and gave him a banner for the team. I am on the look out for a second edition orc cheer leader and if you have ever seen this model, it is a very disturbing model, but perfect for Orcs! The Head coach model is a 3rd (or 4th or 5th) edition plastic Black Orc Blocker that just seemed to be perfect for the coach.

So with that I had my coaching staff, which I will use for my Re roll, TD and turn markers for the game. I plan to add a back drop that has the Azog Ardinals name and logo on it for the event, but we will see how the inspiration for that goes. All in all I am very happy with how this team came out and I was worried that the Red/White uniform color with their green skins would give off a xmas vibe, but I don't think so. So now I just have to get in a few practice games with them before Grumble Bowl 2018. here are a few more pictures of the team.


TK
Posted by Tim Kulinski at 4:57 AM No comments:

How do you paint so fast???

This past Saturday I painted up 50 Ghouls for my AoS Flesh Eaters army and I had a couple of friends ask me how I did it? Well the trick is to just do it!

Now, as some know, I did commission painting with my own company for about 9 years up until I decided to take a break this year from the business. I would always take large commissions in and it would not be unheard of to have at least three paint commissions on the desk at one time. I would always hit my 4-6 week mark that I promised my clients. Many of my customers were very impressed in the turn around time and that's what kept them coming back. 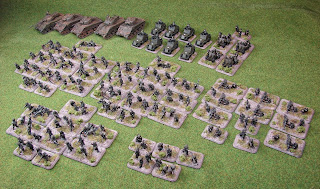 So what was my secret? Well much like the Nike commercial, you need to just Do It! Meaning that you just have to sit down and do the work, that's it, just put your head down and paint! I would spend at least three hours a day painting, and hour before I went to work and two hours in the evening after getting home from work. But I always painted! I stayed on track by not letting other things get in between my painting time, like Facebook, Twitter, video games, binge watching Netflix or other time sinks. I also only worked on those commissions that I had deadlines for. So if I got tired of painting, I prepped other commissions for paint or got them assembled. But I always stay focused on the project at hand and just put forth the effort to finishing up the current project. 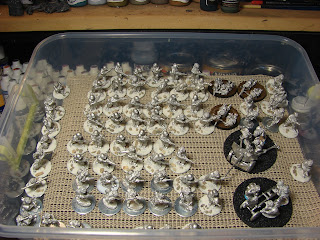 Now, as a commission painter, there are tricks that I have used for painting, here are a few things I do which are not in order.

So there you go, there are a few of my secrets and tips to painting large amounts of models. I find it very satisfying to get my painted  armies onto the table and it is a feeling of accomplishment. Every weekend I go into my local game shop and I see the same tired looking armies that have not had anything done to them in weeks or years. Part of this hobby is all about painting and it really is not that hard to do, but you just have to Do IT!

Just last week GW released Age of Sigmar Soul Wars on the public and a bunch of my gaming group took notice. Now, I am an old Warhammer Fantasy Battle player from back in third-fifth edition. I thought I walked away from GW for good, but with the re release of Blood Bowl, then Necromunda, GW was pulling me back in. But I really had no interest in Age of Sigmar (AoS) when it first came out, as I wanted to go with smaller armies and fewer models on the table. I was a skirmish gamer now and large blocks of infantry were not my thing anymore. But...

There is always a but, isn't there? Well my but was for a longing to go back to my first army I ever had with Undead/Vampire Counts, but as AoS had blown up the Old World, I felt pretty safe with not seeing that army. But with the release of Soul Wars, there were new undead models about to be released onto the world and these models are incredible. But I felt safe with the fact that a few of my friends (Drunken Samurai being one of them) wanted to build this new Haunt army. As cool as the models are, it really didn't fit my idea of a Vampire army.

So as Drunken and I talked the weeks leading up to the release of Soul Wars, he mentioned that Vampires were still alive (meaning undead of course) in the game world under the Nagash lists. But something caught my eyes while looking at books at my local store, the Flesh Eaters army book. Here is an army that is all based around Ghouls and a Ghoul King. It was different, and only really had a few models and it became a possibility to build.

I had pretty much decided that if Drunken Samurai took the plunge, then what could it hurt, right? Well He did take the plunge by picking up the first edition AoS box game that he found for 40% off while we were out checking out game stores. With him buying it, it sort of solidified me into picking up an army. And in my mind I said if I find a Get started collecting box and a big reinforcement box that I would take the plunge with him. Well as karma would have it, at the very same store where Drunken picked up the 40% of 1st edition box set, low and behold there was exactly what I was looking for on the shelf. So as an addict does, I grabbed both boxes and headed for the sales counter!

What happened next is still a blur, but as I started assembling models, I knew I had to have more. So I went out a few days later and bought another reinforcement box and the Flesh Eaters army book. I still had not looked at the rules or even bought the new rules, I was just happy building up Ghoul models again. And before I even read one page of the rule book, I had three Crypt Flayers painted up!

With those done I quickly started assembling the rest of the models, in fact, Drunken and I set up a game the next weekend so I needed to get everything assembled for the game. Since both of us had never played, this would be a test game. He brought all his Stormcast and I put down all my Flesh eaters, which included Zombie Dragon and King, 4 Crypt Horrors, 5 Crypt Flayers and about 50 ghouls.

The game was a blast and we learned a lot about how AoS works, which has similarities to Lord of the Rings, but different. I was so jazzed up about the game that I started painting on more models, which has been rare for me to get excited about painting anything. I knocked out the Crypt Horrors and then had either start on the 50 Ghouls or start on the Zombie Dragon (which I really wanted to paint!).

Well this past weekend I had another game set up for Sunday with Drunken or another buddy, Randy. So on Saturday I decided to start painting on the 50 Ghouls. I painted all day Saturday and was in the zone to have them all finished by about 8:00pm that night.

So with that done in time for Sunday's game all I had to do was start working on the zombie dragon, something I really really want to paint.

Everyone kept asking me where my army was and laughing and making jokes, but as the game progressed, the Flesh Eaters started killing Khorne models pretty quickly. And about that time I realized that the King has a special Command ability to bring on free models, and then the game turned in my favor. At the end, I lost about 36 wounds to Randy's 68 wounds, which left nothing left on the table top.

So, after two games, I think I am in love with this army and will be expanding it to at least another get you started collecting and a few other models. It took me a long time to come around to AoS, but no that I am here, I think I like it! And I didn't know GW had such a hard pull on me, I thought I was strong, but I was fooling myself!

Now, as to what other army do I start???