Well as the title states, I have been pretty lazy with posting up updates. Well I have been busy working on stuff, been assembling Lizardmen figures for Mike, been working on building a Chaos Space Marine army for a trade I did with him a year ago. I have also been painting 15mm figs for Tom for Flames of War. Besides that I have been busy working on some terrain for myself (a few hills & such) and I just recently finished up some Chaos in Cairo figs for Mike, below are a few pics, the rest our on my sister site the Pulp Project found at http://thepulpproject.blogspot.com/ 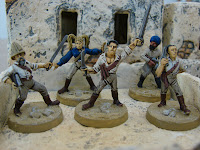 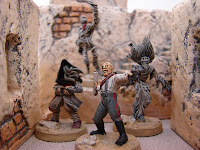 I also have been doing allot of gaming lately, been getting ready for a Warhammer 40k tournament at our local game store Imperial Outpost, been playing some other games with Mike, Mein Panzer in N scale & a funny game that was a blast called Sheer Panic by Mayfair games. Funny thing about this game, I wouldn't have even noticed it but now that I played it I will probably go out and buy it, check it out, it's not what you would expect from a war gamer to play.

I have also been playing some World War 2 in 28mm with a set of rules that my good friend Rob has put together using a conversion of WH40K & Lord of the Rings. Well below are a few pics I snapped a few months ago that I'm finally posting. 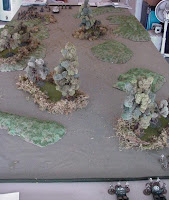 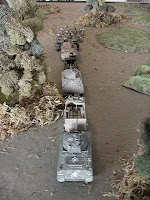 Basically it was a us armoured col um moving to the front & being ambushed by a German force. The Germans had a Panther Tank with two Pak40s and a few Troops. 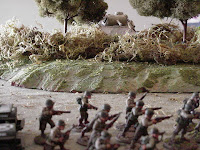 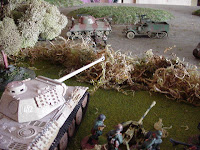 Basically the Americans were beaten back and if I remember right, I won. Below are a few more pictures. 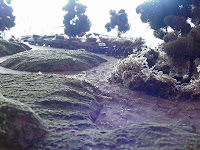 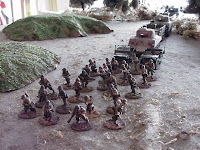 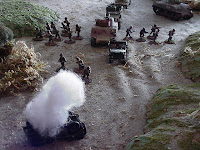 I have also been working on a few American Paratroopers that I got in trade from Mike for painting the Chaos in Cario figs, will hopefully have a few more pics soon.
Also will be making more updates since I'm in the mood to paint & photgraph my stuff, so until then...
TK
Posted by Tim Kulinski at 7:23 PM No comments:

Last night I got together with my friend Lonnie to test out my 1500 point Sister of battle list against his 1500 Black Templar list. Lonnie & I will be playing together in a team tournament at Imperial Outpost on 4/7/07 and we will be using these list together to form one large 3000 point list.

Basically my List includes about 70 models with the bulk being made up of 3, 20 girl squads of sisters. I also have a few vehicles (exorcists) as well as the Saint to lead them with a few fast attack troops (seraphim's).

Lonnie's list was basically 2 Crusader land raiders, a Dreadnought, a Predator & 20 marines with a few special HQ choices. We played a Alpha mission of Take & Hold as a random scenario.

Since this was a practice game I wanted to see how the army would work & testing it against Lonnie would tell me if I needed to adjust anything. Too make a long story short, the game ended with Lonnie winning with having 1 Land raider take the objective. But I did destroy one of his other Land raiders in Hand to hand attacks with Melta Bombs, & I wiped out all but his Chappie & Emperors Champion. All I had left was the Saint with one wound left. All in all a great slug fest of a game.

So after looking at the game, I think the sisters are dialed in & will make a great complement to Lonnie's Black Templar List. Now I have to finish painting them Sisters!

TK
Posted by Tim Kulinski at 9:08 AM No comments:

After last thursdays bummer day, I busted out the paints again & painted up a few things. last week I got in trade 56 Artizan US Para troopers from my buddy Mike. All he wanted was for me to paint up his Chaos in Cario figures (about 20 of them). Well that is my sort of deal, since I am an Artizan Whore for figures, much like my other friend Rob is for Gripping Beast!

So on Friday night I did up 5 figures called the Sons of Set, which are basicly bad guys for the game and I also painted up the special edition Mummy that Mike got as well. I did something a little different with these figures this time around. Usually I base paint the colors on & then dip them, but this time around I tried doing a technquie that many painters are doing by adding a lighter shade of highlight, I then dipped the figures. They look great, but it really didn't save any time so I'm not sure if I will keep doing it.

On a side note, I also borrowed from Mike, the 1st season for the TV show Farscape. I have only caught bits & pieces of the show when it was on the air, but now, I am hooked. Will have to go out & get this series for myself.

Anyhow, will post up pics tonight of some of my progress...

TK
Posted by Tim Kulinski at 8:18 AM No comments: 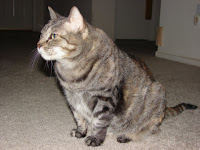 Yesterday (3/1/07) we had to say goodbye to one of our beloved cats, Deidre that we had for 14 years. We in fact got her about six months into our marriage and she was the last one of the original three cats we had (Resses, Blackie & Deidre). As some of you knew, Deidre was our one cat that would bless you when you sneezed by meowing at you. not sure how we taught her this but she did it every time.

She was also the one cat that I had that loved citrus stuff like orange juice (actually Sunny D), lemonade, and lemons as well as a bunch of other stuff. She also loved tuna (what cat doesn't) and would come running from wherever in the house when she heard the can or pouch open!

Deidre was "my" cat out of the three, & I will miss her and the times we spent with her lying on my chest as we both watched TV or when she would crawl under the covers with us on cold nights & hogging the bed! I will also miss her sitting in the computer room watching me mess around on the computer. In fact Deidre was always there when I worked on my Pirate Project as well.

Being 14 years old, in the last few months she started to loose allot of weight, which we thought was due to age or her loosing teeth. So we recently switched her over to wet food & she was eating up until this Tuesday. We also noticed over the weekend that her stomach started to swell up and that's when we took her into the vet on Tuesday. Well we got the results back yesterday and the vet thinks it was a stomach tumor that was swelling. We decided that because of her age and the fact that they couldn't do a whole lot for her to have her put to sleep.

Now I have to state, I'm a big baby when it comes to this! Thank God for my wife who is stronger than I to have to take care of this, without my wife I would be a babbling idiot! So with that yesterday at 5:12 my wife called me to say that Deidre was gone. She will be loved & missed and I will never forget my "Number One Kitty"... 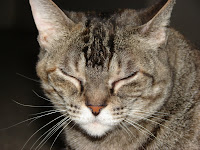