Been busy working on Lonnies Steel Legion, but was able to sneak a few of my own models into the painting que. First up a few Ministorum Priests that hve been sitting on the painting bench for about 3 years waiting to be finished. I use these guys with my Imperial guard, Sisters of Battle or for my Inquistion war band. 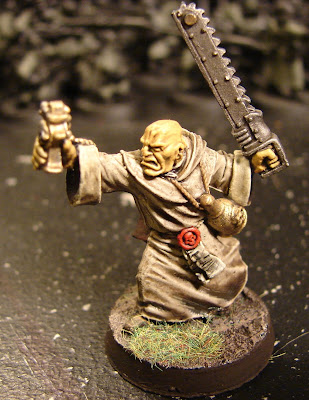 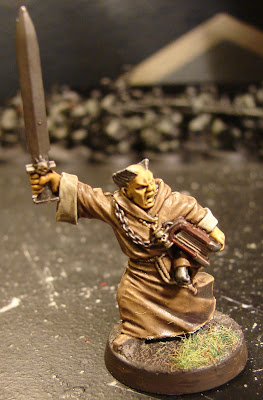 Next up a few Operatives for the Officio Assassinorum, the first, the dreaded Culexus Assassin 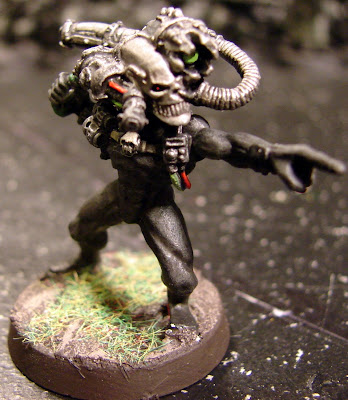 Next, the Callidus Assassin, which I used in a game yesterday against Robs Knights of Eden. She caused much grief for him and his sqaud of tactical marines. 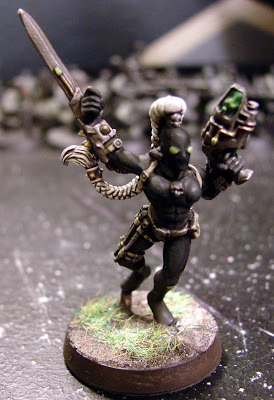 The next two are from the Death Cult assassins. These were the toughest for me to paint since I did not know what colors to use. I was going to do them in Reb, but switched to black and I think its the better color for them. 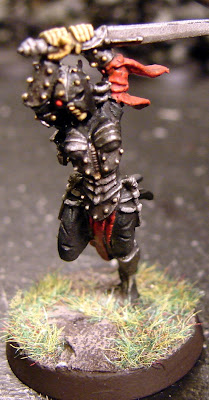 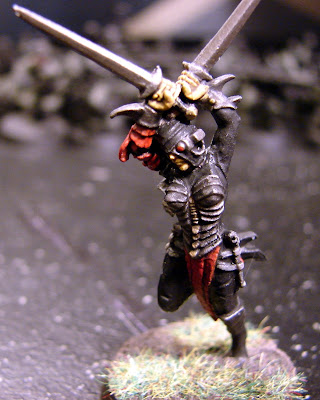 The last two pictures are for my Radical Inquisitor. First of, this is a really old Bob Nasmith GW model that Rob gave me a few years ago. All I did to it was add the power sword, backpack and Plasma Pistol too him. Secondly, since this dude is a Radical Whitchunter, I wanted to make him stand out on the table, so I choose Gold as his color. Thirdly I opted to mount him on a GW 25mm base followed by a 40mm base, this added some height to him and makes him fit better scale wise with the rest of the current GW line. 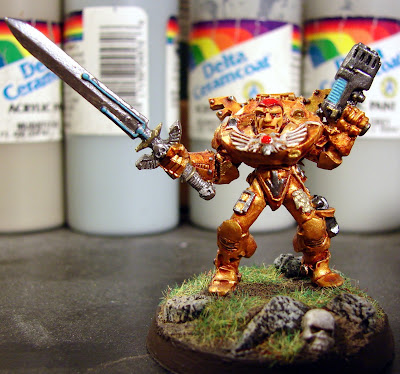 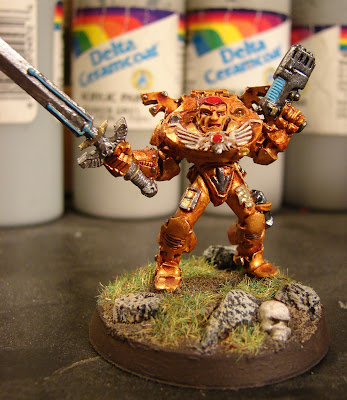 So there you go, a few 40K figures for Fathers Day.
TK
Posted by Tim Kulinski at 12:54 PM No comments:

Well I have been thinking a lot about this 40K Skirmish thing again and my mind drifted back a few years ago when are little group had started a small 40K campaign which was story driven. The intent was to play some 40K in its various forms (large battle, 40K in 40 Min, kill teams) and one of the things we wanted to do was battle reports. Now our little group was more concerned with narrative BR's rather than the more blow by blow sort of reports. We started a blog and we got up to 13 posts before life got in the way or other projects caught our eye.

But yesterday I took a stroll down memory lane and revisited the blog ( http://edenwar.blogspot.com/ ) and found myself getting caught up in the writing that we did years ago. It was interesting because we were playing a lot of different games but all of them were tied to the main campaign in some way or another.

Now I have always been one of those guys that have wanted to do a drawn out campaign. In fact my friends all know I am the first to say, lets do a campaign! (And they still give me crap over a defunct LotR campaign I did!) But with a lot of campaigns they sort of just slowly end because people drop out or life happens. Well our intention for the Eden War campaign was to run a narrative storyline campaign that could be played whenever by whomever. Rob has actually been rather busy working on his forces with his Knights of Eden which he has been featured on his blog, which these came about due to this narrative campaign.

So I think that it is about time we get back to Eden and the struggles that were going on there. I will be posting up more stories in the coming days, enjoy the few that are there now at http://edenwar.blogspot.com/

TK
Posted by Tim Kulinski at 7:39 AM No comments:

This past Friday I had a few guys over to the SPL (Secret Pirate Lair) for a few games of the 40K skirmish that myself & my buddy Rob ( http://dspaintingblog.blogspot.com/ ) have been toying around with.

Rob posted up these few modifications on his blog (posted below) and pretty much used them as he wrote them.

Turn Sequence - The basic turn sequence is unchanged from the 5th edition rulebook.

Movement Rules - The basic movement rules are per the 5th edition rulebook.

Each figure is treated as an independent unit.

Shooting Rules - The basic shooting rules are per the 5th edition rulebook with the following changes.

Sniper Rifles – target must take a Pin test if hit but no wound is rolled.
Wound Chart – If a target takes an unsaved wound roll on the following chart for the wound effect.

Assault Rules - The basic assault and close combat rules are per the 5th edition rulebook with the following modifications.

Ignore the rules for Assault grenades.

Figures that have Gone to Ground, or are Pinned, and are assaulted will recover immediately but they will fight with I=1 on that round of combat.

A model may break-off an assault in their next move phase if their opponent has be forced to go to ground in that Assault phase.

Models must charge the model that they shot at in the Shooting phase unless the target was wounded or forced to go to ground. In this case the assaulting model can assault any target model in range.

So with these rules in hand my Jerry ( http://jerry-bigpicture.blogspot.com/ ) brought over a few Tau Fire Warriors and I busted out a few Imperial Stormtroopers. Jerry had taken 10 Fire warriors equipped to the max which came up to about 140 points.

I took 6 Stormtroopers with one equipped with a Melta and 1 sergeant with Bolter & Plasma gun, basically was about 140 points (using the Whitchunter codex).

I set up a 4' x 4' board with a river running through it with a few buildings on either side. We declared that the river was difficult terrain and choose our side & threw down the dice. One thing I will mention now, is that I forgot about the longer range the Tau have on weapons and the higher strength, needless to say Jerry held up in a building closest to the river. With his longer range & higher strength, I was getting hit pretty quick.

The nice thing with the above rules mods, that even though the Tau were hitting me, the extra roll for what happened was a nice feature. I had the melta gunner break across the river and took 10 shots from fire warriors in Rapid fire range and did not go down! Although my luck ran out and Jerry started killing Stormtroopers after that.

By the end of the 4th turn, I had only two Stormtroopers left and one was about to engage in Hand to Hand combat, while the other was taking pop shots from across the river. By this time we called it since I only had 2 models left and Jerry had only lost one Fire Warrior.

So how did it play? Well it played very well! About the only thing I would add is that you really need some sort of objectives to these games. In our test game, Jerry just hunkered down and shot me up as I tried to cross the river. I think the Kill Team story hooks from 4th edition would work really well for this game, since straight up fights are pretty boring.

We discussed the potential of this sort of game and what the intended purpose is for us. For me, I want to be able to use this game to drive larger games, basically to add a storyline to our games instead of playing 40k just in tournament mode. So I can see my Sisters of battle deploying a few Assassins to take out some person or to use this as a scouting mission to gather data. Once again for me, its all about the storyline.

So give it a try, it may breath some new life into your games...

TK
Posted by Tim Kulinski at 8:30 AM No comments:

Yesterday I went over to Rob B's house to play a game. I was in the mood for some Necromunda, but Rob wanted to play some 40K. So I packed up my Sisters of Battle and headed south to face off against Rob's custom Space Marines and we had a blast duking it out over his war torn battlefield. (Sorry no pictures were taken)

So why do I mention Necromunda??? Well during the game and after Rob & I got to talking about how we missed Necromunda. Both of us have the first edition of the rules and the last time we played was about 3 years ago. We both have forgotten how to play but reasoned it would be easy to pick back up. Heck I still have a few models to paint up for it & Rob just about has the entire range with a few exceptions.

Then while sitting there in his living room, the thought entered Rob's head that we could play the current edition of 40K as a skirmish game! After all, Rouge Trader started as a skirmish game, so it shouldn't be too much of a stretch right? So we started thinking about it. Rob and I loved playing Combat patrols and Kill teams from the 4th edition of the 40K rules, but there was something missing, we just could not put our fingers on it. But with 5th edition it seems like it could work, it would just need some tweaking to the rules.

So looking at it most of the rules would work rather well, Movement, Shooting & Fighting, we would need to look at some sort of Moral rules since the current rules are based on squads rather than individuals. We would also need to work on expanding the wounding rolls, possibly add in something like Flesh wounds or taken out of action from Necromunda. Choosing up battles would be easy, you would just need to choose a point level and purchase your guys or teams. Also adding in some sort of experience table could work much like Necromunda. There may be a few other things, but it should be pretty easy to do.

So Rob & I will be exploring this possibility and the bottom line is for us to play a few games. I will be honest, I have been wanting to do this sort of thing for a while but never got around to doing this. In fact I was so fired up, that I rushed home to dump out my unpainted minis and see what sort of team I could put together.

So stay tuned here as well as on Robs Blog, http://dspaintingblog.blogspot.com/ for more info coming...