Empire of the Dead! 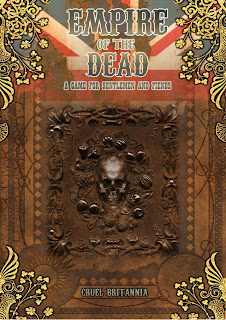 It has been a while and I think I am coming out of my funk finally and one reason may be this new game I am going to talk about, West Wind Productions Empire of the Dead. You see I have been a fan of the Gothic Horror fan and I have been looking for a good set of rules. When I saw that West Wind released a Quick Start rules on their site, I downloaded them. They look really good and look like they follow a certain style of rules that I enjoy. Also the figures look awesome!

Anyway here is a description of the game taken from the West Wind site:

Taken from the West Wind site:

Empire of the Dead is a 28mm tabletop skirmish game for two or more players.Set in a darkly Gothic Victorian Empire populated by Heroic Gentlemen and Fiends of unmentionable evil. Choose from 4 starter factions which can be expanded from a range of special character models. Built in Campaign system gives each game its own unique flavour.Welcome to the Empire of the Dead. It is 1888 and much of the world is in turmoil. The great discovery of the age, Infernium, has brought technological advancements barely dreamed of just a few years ago. Its discovery, however, has stirred the basest instincts of man and nature alike. The lines between right and wrong or good and evil have become blurred as factions battle not only for control of the streets but the very future of mankind. From the forests of Eastern Europe to the rookeries of London, factions have come together intheir quest to defend the natural order of life or to simply achieve their own ends. When you step into the world of Empire of the Dead you enter a place where only your wits and tactical thinking offer hope of survival. As the leader of your Faction your task is to ensure that those who serve you survive whatever fate has to throw at them. In that way lies the route to your own advancement and enhanced power and influence. Yourposition, though, requires you to also serve your own masters, the leaders of your clan, club or order. Only by doing that, however obscure their purpose may seem, can you hope to avoid the assassin’s knife or well placed bullet.Whether your allegiances lie with the Holy Orders of the Church, the Lycaon and their dedication to the protection of the natural order, the ancient evil of the Nosferatu or the gentlemen of the Clubs; the world that you are entering conceals many dangers and challenges for the unwary. In the Empire of the Dead nothing is as it seems. Today’s allies may be tomorrow’s sworn enemies and even the local populace may turn at a moment’s notice from a placid flock to an angry mob. Fame, fortune and unbelievable power will find those with the cunning and tenacity to survive the fortunes of the fight, ignominy and death await the rest. From the polluted streets of the city’s rookeries to the calm tranquillity of the countryside, nowhere is immune from the intrigue of the Empire. So set aside all that you know, be afraid of every corner and remember that myth and legend are just a way to hide the true horrors of the world.

Needless to say, I will be getting this set of rules and busting out my Gothic Horror figures that I purchased a while ago. I also plan on running Demo games and have already started thinking of terrain for said such games. I have also started working on my friends to help out, we will see. but the good news is that you will be seeing more of this game here at Cursed Treasures.

Also you will be seeing more posts now that I am getting out of my funk (still playing my PS3 though!).