Today was the big (or small) event for Saga her in the Valley of the Sunstroke. We had eight folks that committed to the event. But life got in the way for one person so we had seven total folks. The breakdown of players and armies were as follows:

We played three scenarios that were set on each table and we rotated to each table with a different opponent. Table one had Clash of Warlord on it, table two was Battle at the Ford and the last table was Home land.

We kept it simple just tracking wins and victory points. Since we had an odd number of players, we had one player take a bye and get a win, I took the first bye since I was running the event. It all worked out well with only one issue with paint judging.

So here are a few pictures from the event: .

So after all the dust settled, I added up the win/loss of all the players.

Tom O took overall winner, Robert took the best painted and then everyone else got to take turns claiming their prize.

All in all it was it was a great time and everyone enjoyed themselves. We had a bunch of folks come by and watch the games.so their you go, Ragnarok is in the books, we will be doing this event again in the near future.

I finally finished up my 6 point Saga army about two weeks ago. I wanted to get pictures up sooner but had a few things come up (wife had to go to hospital for kidney stones and a quick trip out to CA for work). So here is what I got done:

So the force is as follows, the Warlord, 2 Hearthguard units, 2 Warrior units and 2 levy units. All the models are Gripping Beast plastics except for the warlord which is a Gripping Beast metal figure. It took about two weeks to assemble and then another two weeks of painting off and on each night between writing and working on paint commissions. I took my time with painting and did a bit more highlighting on the figures which makes them pop on the tabletop.

Here are a few more shots: 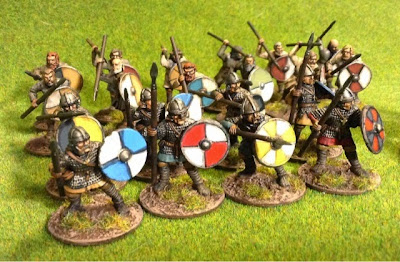 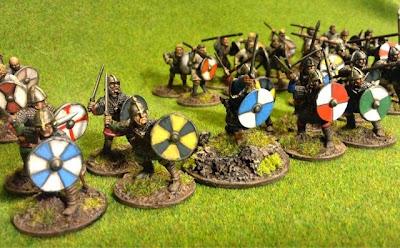 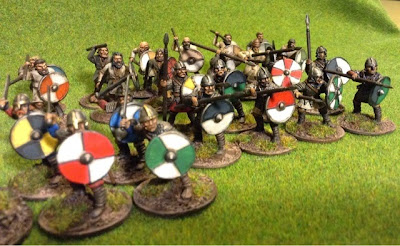 This army is for our little "Non-Event" called Ragnarok, which is a small 3 game Saga event being held at Imperial Outpost games here in Phoenix AZ. We have two main reasons for doing this, one is to show folks Saga and that there are folks playing it here and the second reason is just about getting together with friends to play Saga. 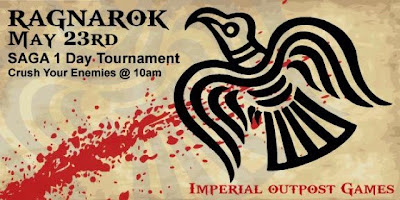 The fine folks at Gripping Beast sent out a few items for prize support, which Is awesome. Gripping Beast has always been more than happy with us gamers here in Phoenix going back to the days of WAB and the tournaments we ran here. 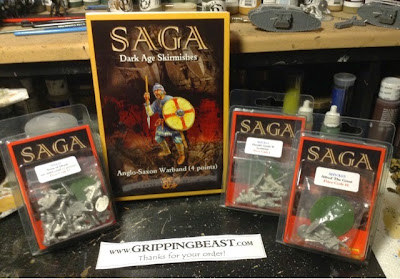 We also have a Viking Drinking horn from my good friend Jay Ryan and his company Feestzaal Horns, which if you were at Adepticon this year you saw their cool horns and they gave one away at the Saga Grand Melee event. Now ours is a smaller one, but it's just as cool as the larger ones.

Mike and I also had some cool Saga movement sticks done for us from Hollow tree studios.

So there you go just a quick update for the blog.