You want to play what?

Been thinking about this for a while, so I thought why not write something down, so here goes. Why do we gamers stop playing certain games? Lately I have been wanting to play some classic games like Blood Bowl, Legends of the Old West and Necromunda, but I am finding it hard to get some of my game buddies to play.


I have noticed that with Games Workshop games, once the game goes out of print, the interest is lost on these games. Now sometimes the game companies don’t help this, like releasing a new version of the rules and totally screwing up the game (can you say LotR and then the Hobbit?). Now I understand it is hard to get new players into an older version of the rules and its even tougher if the rules are gone all together. But what about the folks that kept these older games?


If you invested into a game and still have all your “stuff” for the game, why not play it still? I understand that there is only so much gaming time available to folks, heck I only really get one day to play games now because of family obligations. I also understand that with less gaming time, there are many newer games that need to be played, so the older games slowly take a back seat. My own gaming experience shows this, for a few years Flames of War took up all my gaming time, heck it was the most played game for me for three years running. Now I hardly ever play, partly due to my interest level being low on it and the other part is that I want to play other games.


Is that the case then, too many games and not enough time? Perhaps I answered my own question then. This past weekend I heard from a friend tell me he missed Lord of the Rings, I replied that we all did in the game group. But that’s the gist, we all still have armies and all the books, so why don’t we play it? Maybe it is a nostalgic thing as my good friend Rob told me, it’s as if we have moved on from certain games like you do in relationships, I don’t know.


Now as I mentioned earlier, the game companies don’t help with this. Take Warhammer Historical products. When GW closed this branch of the company, there seemed to be a mass exodus from playing their games, people said things like “It’s not supported” and “Can’t buy it anymore, won’t play it anymore” as if that was a reason for people to stop playing the games. Once again my personal experience is that I had a few WAB armies for the dark age period. I had all the dark age books so I was set and didn’t care if they released anymore books. But our group moved away from playing WAB 1 or 1.5. Same thing for Legends of the Old West, I have all the figures I need, have all the books and terrain, but once Warhammer Historical closed, people got rid of their stuff.


Maybe it has to do with the community, take Blood Bowl, it was a game that GW killed a few times but the community kept on going. They did not need GW to support it, they just kept playing. Heck once GW tried killing it, many other companies stepped up and kept making figures for the game. Blood Bowl still lives on and is still played all around the world. I find it funny that for a game has no support officially, there is ton of other companies supporting it. Heck one tournament back in the Midwest, had over 64 players show up to play, that’s amazing!


So where am I going with this? I guess what I am trying to say is keep playing the games you love and enjoy, you don’t need the companies support, just gather a few friends together and keep playing it if you enjoy it, maybe I am over thinking all of this, time to get back to painting my toys…
TK
Posted by Tim Kulinski at 11:09 AM 7 comments:

Been a while I see, so time to catch folks up on what I have been doing. 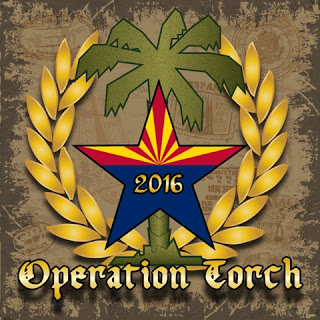 Well, back in February, had a little event called Gathering in the Desert, which was a huge success, had a few new out of state folks, as well as some old friends return from out of state. Good mix of us locals and other than the campaign scoring, everything went off without a hitch. We will be doing GitD again next year and it seems the theme will be Normandy! 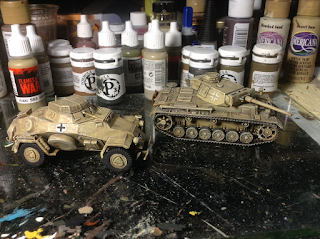 I painted up a bunch of terrain as well as figures for this years event and got my German DAK force up to snuff and feel really good about getting that done. 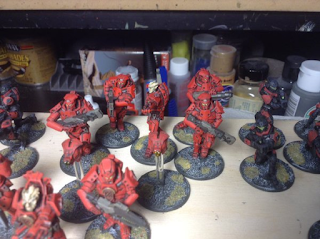 Oh been painting a lot of Gates of Antares armies for my local store for demos, just finished up the Algoryans and will be working on the Freeborn next. If your wondering about GoAT, its a new sci fi game from Warlord which the base mechanic is the Bolt Action system, but with a whole lot of other rules. My buddy Mike is really digging the game and I am interested in it, but have not been wowed by anything that has come out. I am still waiting for a cool army to get behind. Right now I have a Concord force, but they are just okay, they do not wow me. Don't get me wrong, it is a good game with lots of detail, just not excited about the figures like another game I picked up. 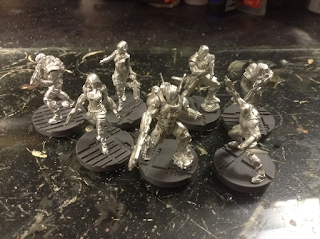 So what's the other game, well it is Infinity! I picked up the two player set at the end of last year. A few months ago I picked up the rules and started reading them. Rob also picked up a force for the game and we are going to slowly learn the game in baby steps. We had a very basic game a few weekends ago, to get some of the core rules down. It went very well and I am now eyeing more models to add to the Nomads.

Now the Infinity models & terrain have me super excited about the game,  much more than Gates. I will be picking up a few 4Ground buildings to build out a nice 4'x4' table. That's one thing that Infinity needs, lots of terrain. 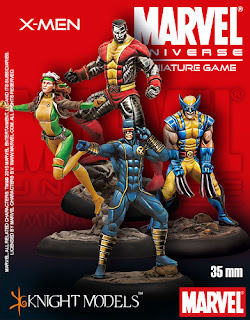 This another game I am waiting for, Marvels Universe Miniature game from Knight Models. I have always wanted to do some Super Hero games, and with this game I can play the X-men. I am waiting for my local store to get the stuff in, which hopefully is this week. It also means that I will be running a few games of this at Phoenix Comic Con in June for our local shop. So I am pretty excited about this game as well.

Lastly, been on a nostalgic trip of late and been thinking about Blood Bowl. With GW announcing that the Specialist games are coming back & that Forge World showed new sculpts of BB figures. I have the itch to bust out and play Blood Bowl again. I have even been thinking of organizing a one day fun event for it. I have always wanted to do a BB event, I have been following events like Zlurpee bowl http://www.zlurpeebowl.com/wordpress_z/wordpress/ and other events. Maybe its time for me to do something about that, we shall see.

Anyway there you go, just a few things I am working on..

TK
Posted by Tim Kulinski at 3:32 PM No comments: