First off I have been absent from the blog for the past two months dealing with the loss of my father in-law. He passed away about a month and a half ago and it has been rough on my wife. My in-laws live in California so we have been making many trips out there for the past two months. So hence the reason for the lack of blog posts and the lack of any gaming. Life sometimes has a way to mess up the best laid plans. On that note lets take a look back at what I have done this year. 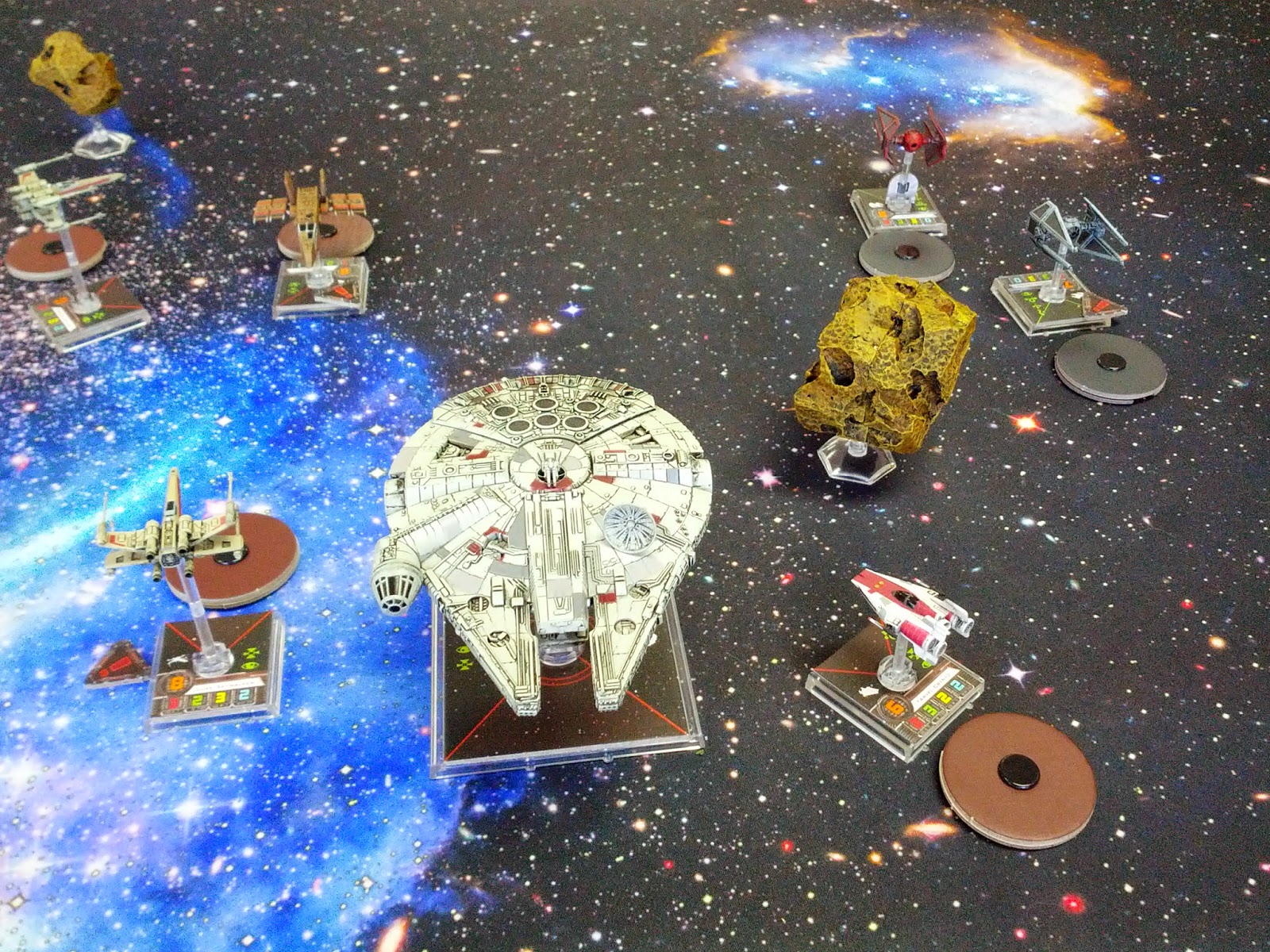 X-Wing
Well I have only played a few games of X-wing this year and one of the games was a multi-player game with Robert, Jerry and Mike.The game was great and we all had a blast, although Robert was the only one doing any sort of damage with Han Solo and the Falcon! But sadly after that game, it never got back onto the table. It seems that we all love the game but just never have time to bust it out and we play other games. Now as I write this Robert and I are getting together tonight for New Years and we are suppose to play some X-wing. Funny we ended last year with games of X-wing as well. 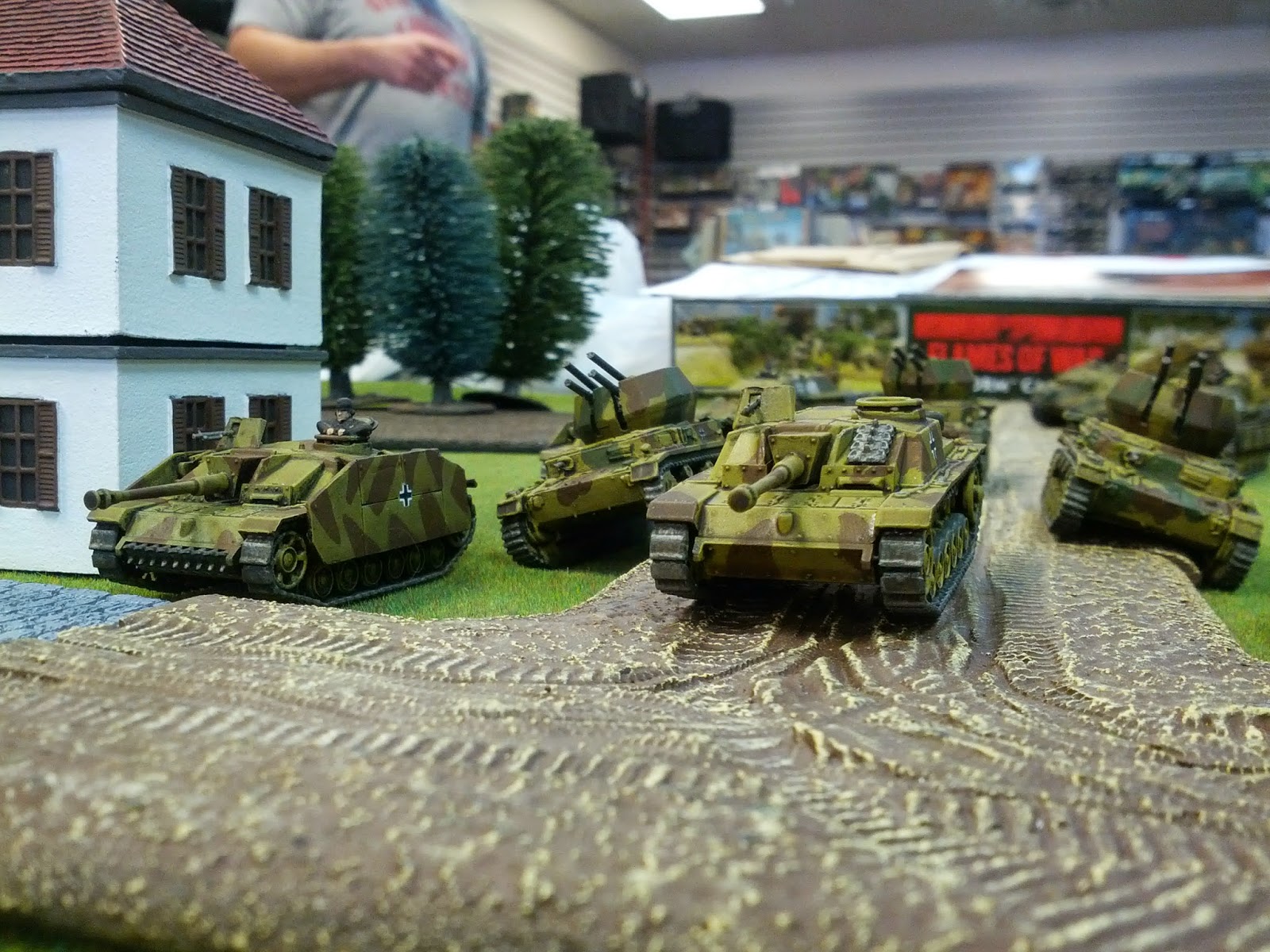 Flames of War
So Flames of War was pretty big again with me getting in twenty five games this year. I also painted up three armies this year (US Airborne, German Stug G and Jagpanter lists) and played in my first Shifting Sands event. It was a good year for FoW but I did notice that by game twenty I was starting to feel like i needed to shift gears. I had to take a break from the game because I was getting to wrapped up in it. I started to get upset with myself and becoming angry as I played and thats when I knew I need to take a break. I still love the game, just need a break is all. 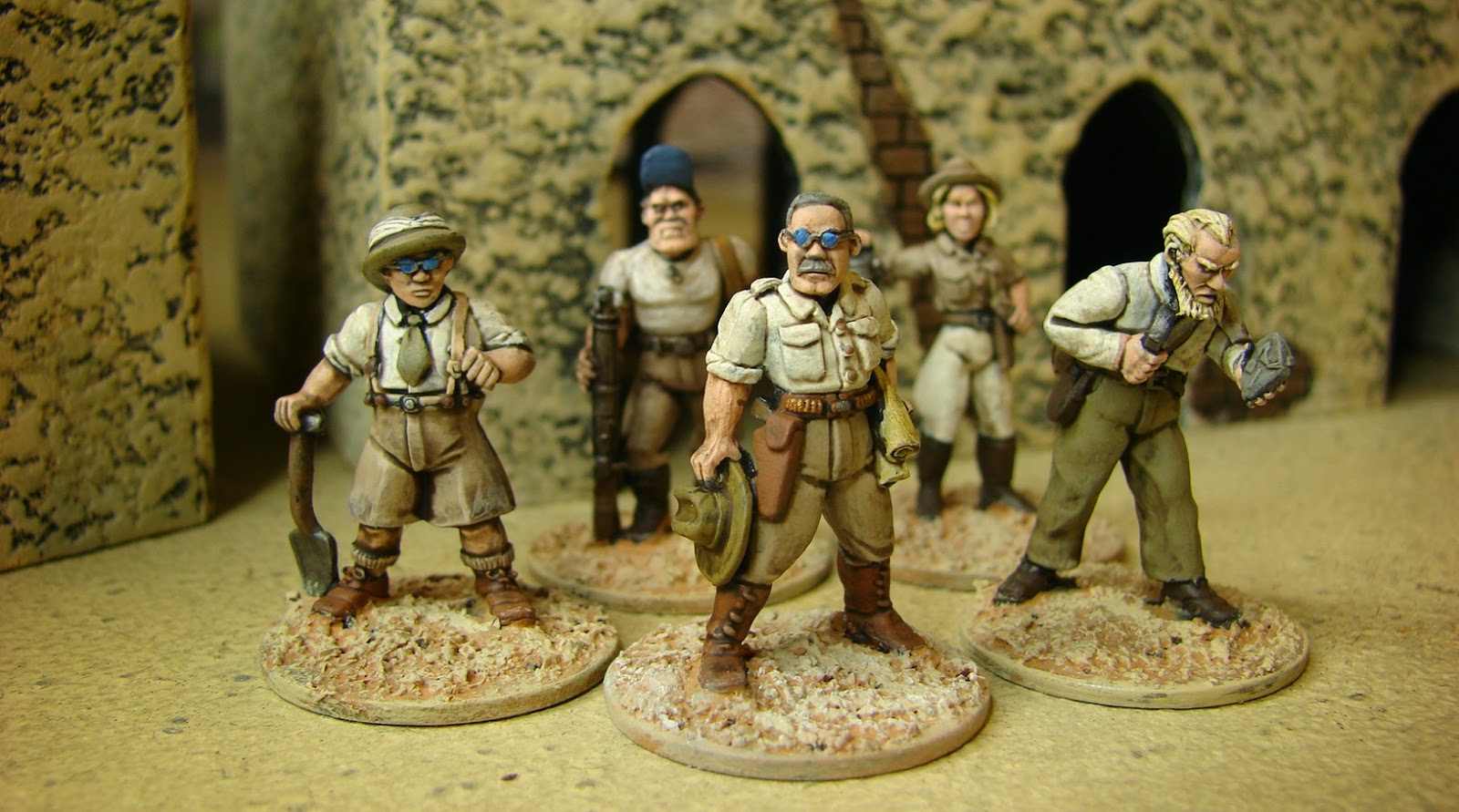 Pulp Alley
Pulp gaming has always been one of my favorite eras to play and I have been painting a few figs a year now. With the release of Pulp Alley I found more time to acquire and paint up Pulp models. I got in a bunch of games of Pulp Alley this year and I will continue to play this game. Mike has also been bitten by the Pulp  Alley bug and we are talking about doing a short four game "Movie"/campaign so expect to see more Pulp Alley this year. 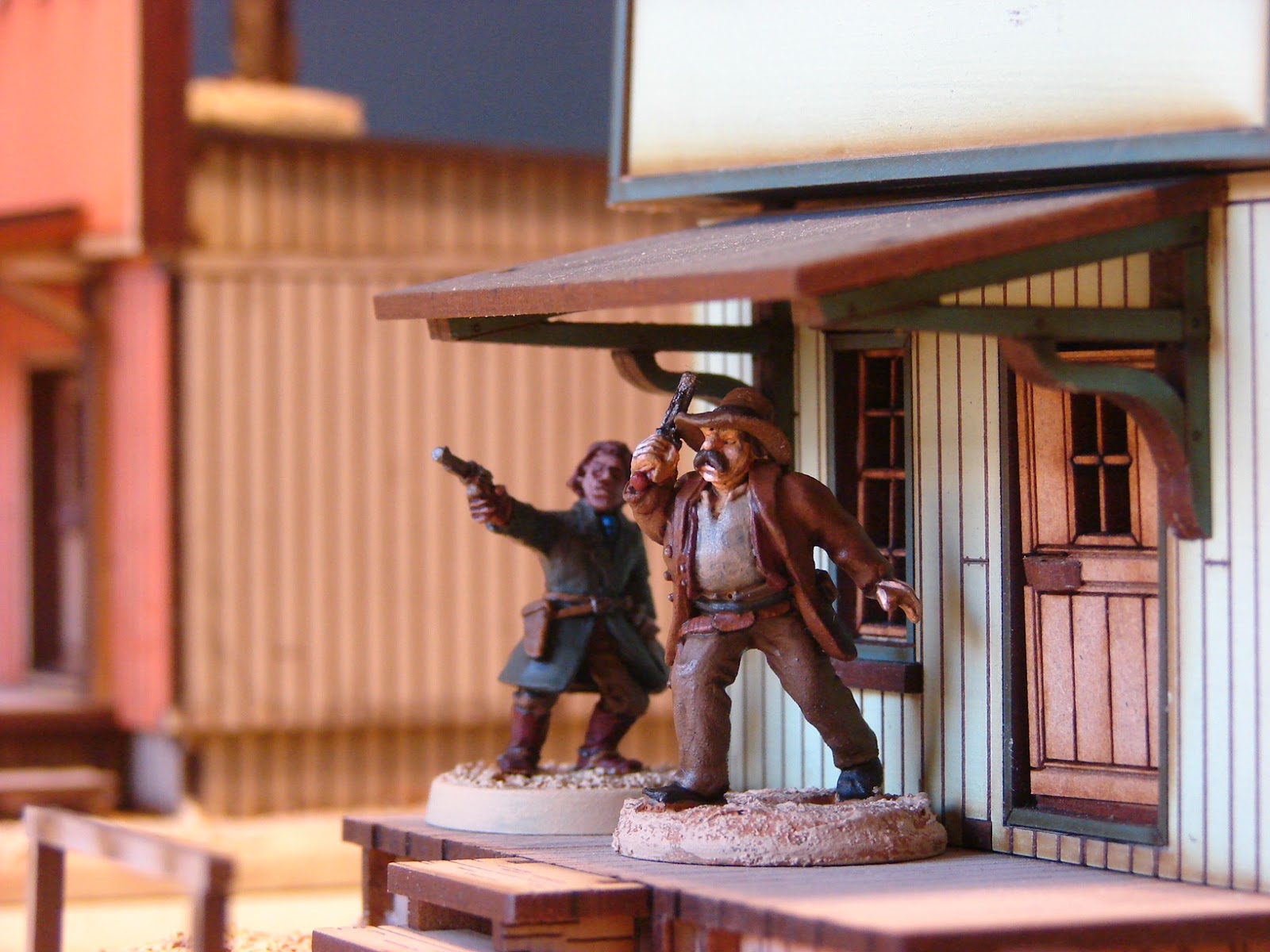 Legends of the Old West
So this year I played in a LotOW tourney at Adepticon, I was won the Best Sportsmen Award and I missed out on the Best Looking Award by one point, which was my point that I voted for another guy. One thing that Adepticon did was fuel my need for 4Ground old west buildings, the tournament had them and I fell in love with them. I sold my Arnica resin buildings to fund buying the 4Ground stuff. Well I have about 6 buildings and they look great. On the figure front I got a set of the Magnificent Seven set from Gorgon Miniatures. I also this year was able to pick up a few Black Scorpion miniatures to add to the collection. But other than one game that Robert & I played after Adepticon, no other old west games happened. But all in all I was pretty pleased with LotOW this year. 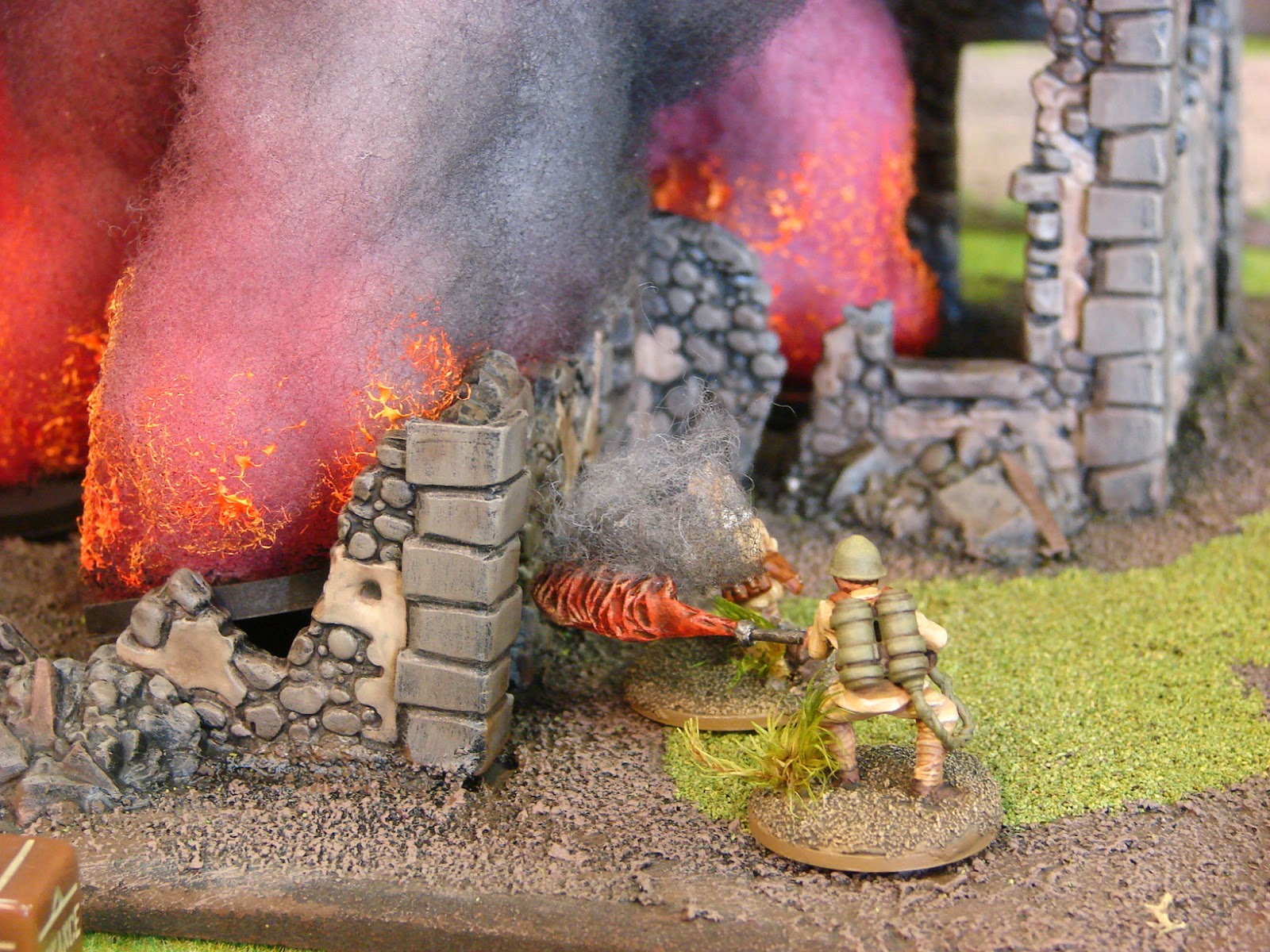 Bolt Action
Gathering in the Desert saw the first and only Bolt Action event run here in the valley of the sun. We had about 18 players and it was a huge success. I did a lot of terrain work for the event and did add a few units to my armies. The weekend right after GitD, saw another Bolt Action event run by the local Warlord reps and I was excited to get a chance to play as a player. But the local rep knew anything really about the game or how to run a event. In fact I only got to play two games out of three because a odd number of players. Needless to say, do to the poor running of the event I lost all interest in playing Bolt Action. In fact I didn't even want to talk about Bolt Action, I was that bummed about the game. I will say that my interest is coming backand in July while on vacation I picked up two boxes of Perry Miniature DAK figures. Robert and I will be doing some North Africa in the up coming year. 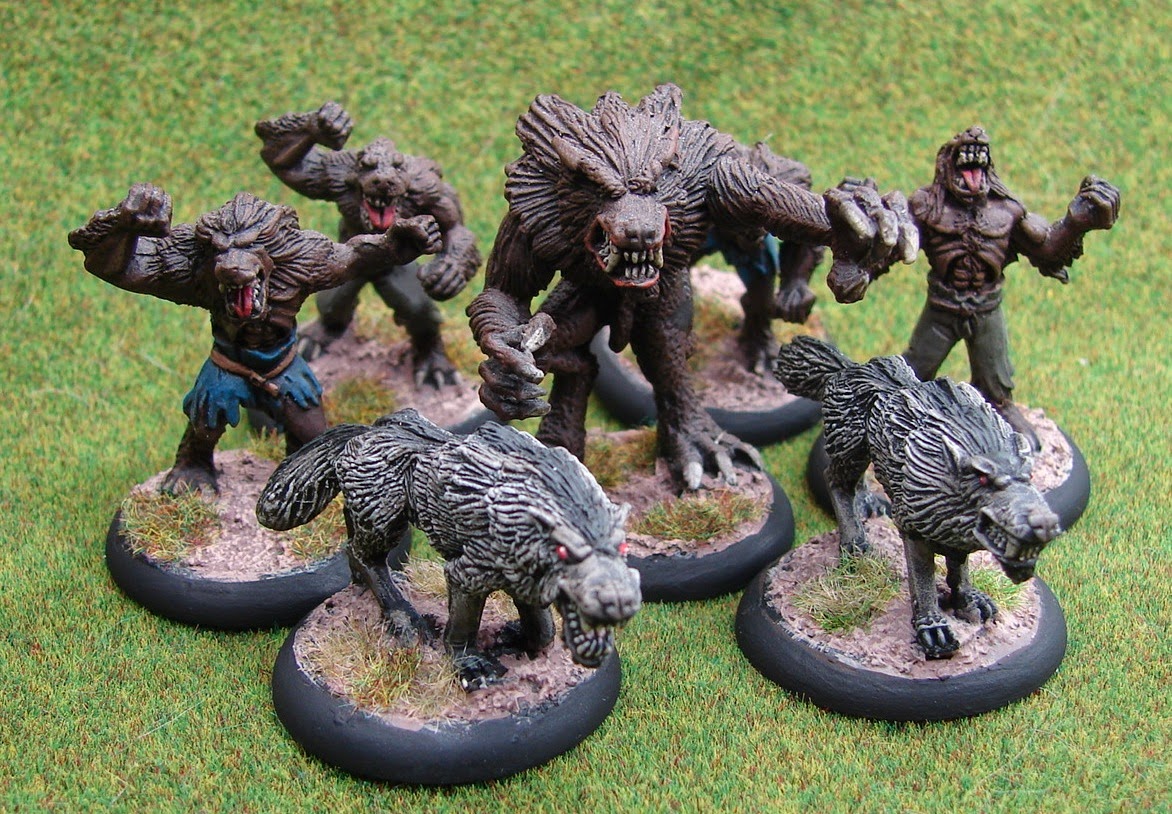 Empire of the Dead
Just like the dead asleep in their graves, so was this game. I had high hopes to get this onto the table but it never happened. Once again, there is only so much time to game and choices need to be made, so EotD sleeps awaiting the day to climb out of its grave (or tabletop!). 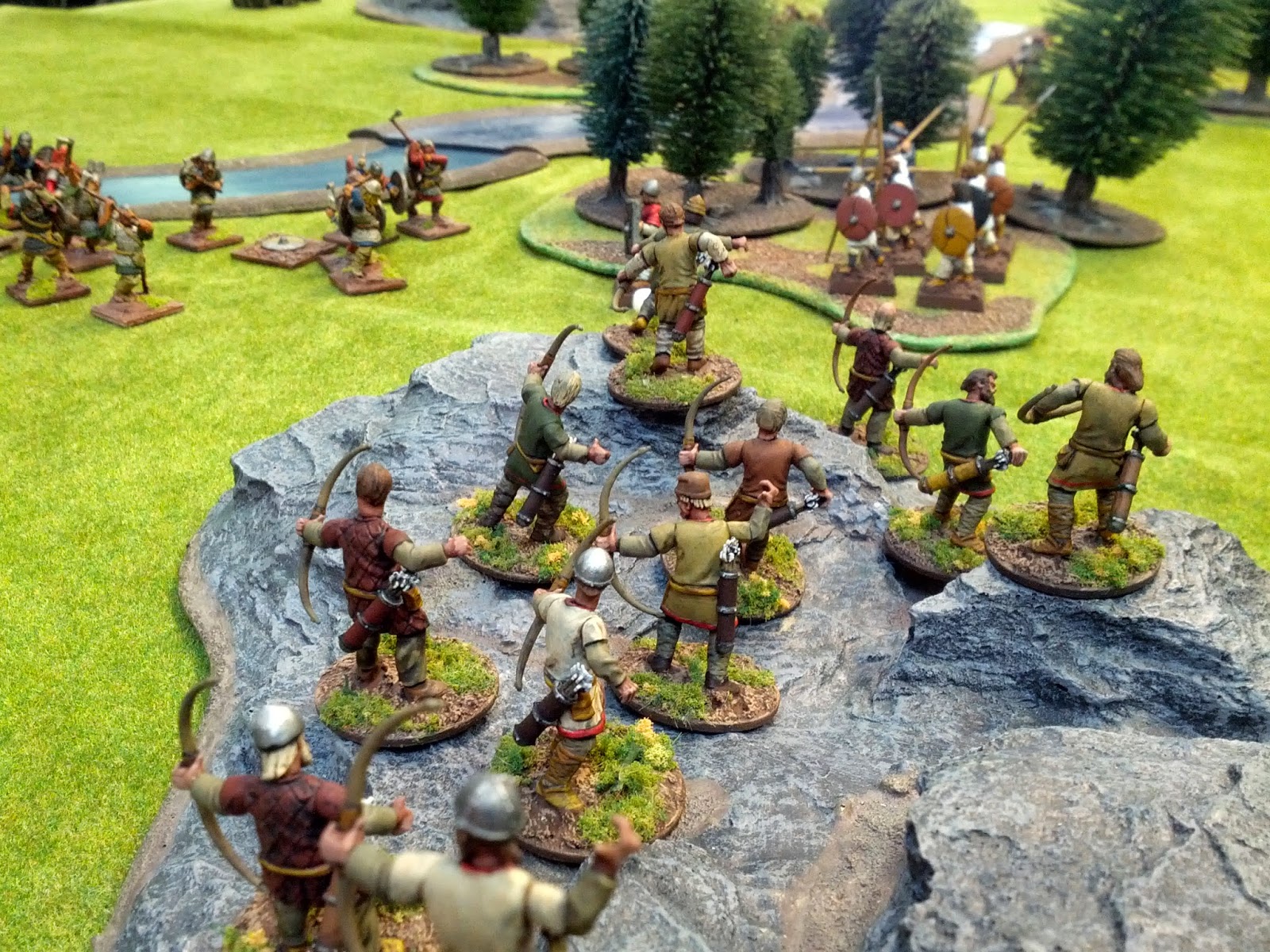 Well the plan was to get Saga onto the table and as of the last few weeks, it has been played. I have about four games under my belt as of today (played two games against Robert earlier today). I have dusted off my old WAB army vikings and pressed them into Saga service. The last time my vikings were out of the box was about 5 years ago, so it is nice to be able to use them again. Within the last few weeks I have purchased Saga dice (Vikings and Anglo Saxon) as well as a Gripping Beast Anglo Saxon Warlord and plastic box of Saxon Thegns. Today I picked up a box of Bondi troops from Wargames Factory to add to my collection of Saga Vikings and Saxons. The good thing is that we are having a few people jump into Saga, so we will be getting Saga out onto the tabletop in the coming year. 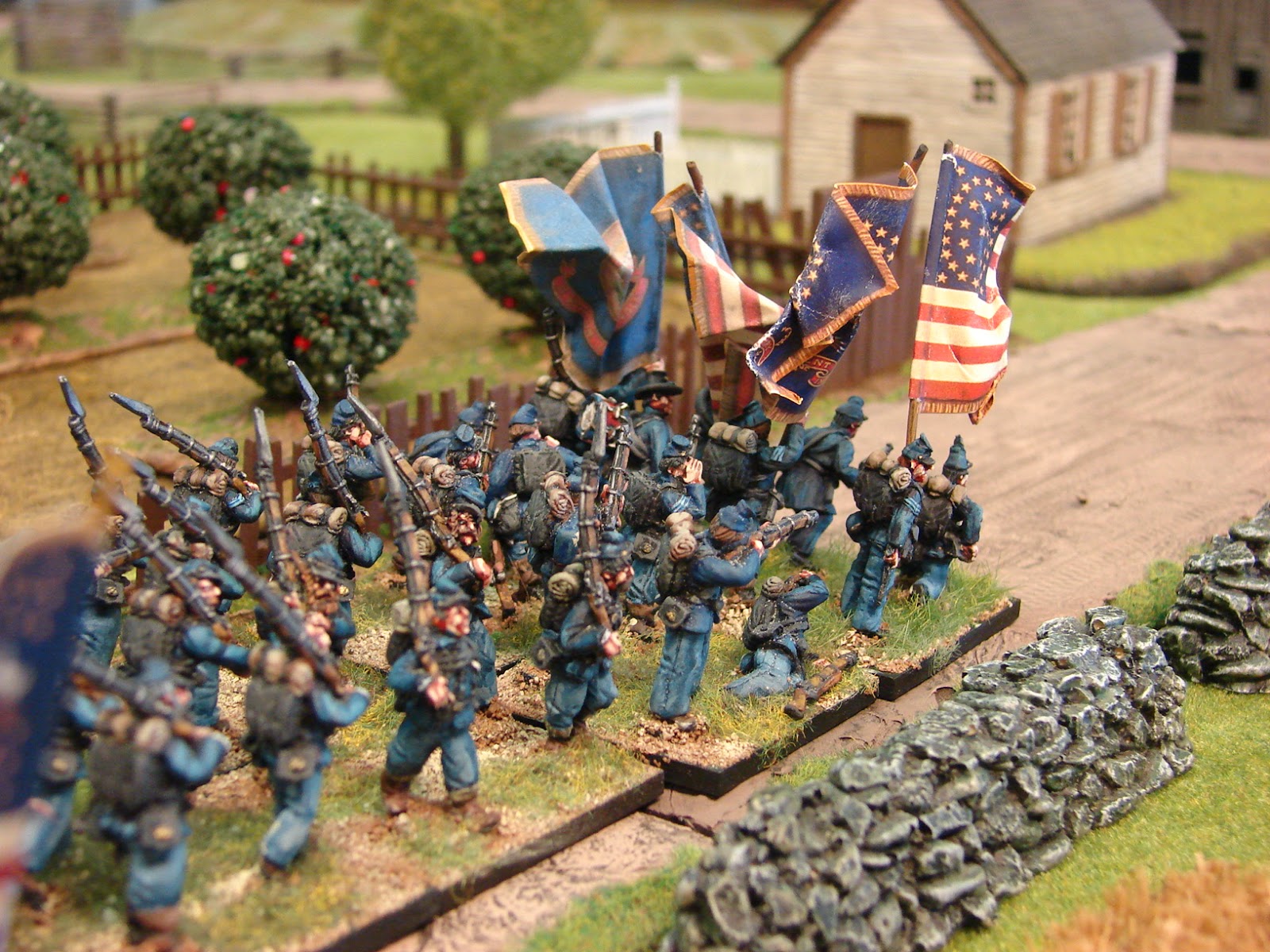 Black Powder
Well our group of gamers did two Black Powder American Civil War games last year and we all wanted to get more of it onto the table in 2014, but we were only able to get in one game this year. I also wanted to get my Confederate Brigade painted up and I have to say that it was an epic fail. Robert and I were talking about that today at lunch and we are not sure why it hasn't been played more this year. So the plan is to get my army painted for 2015 as well as a few other items for Black Powder. 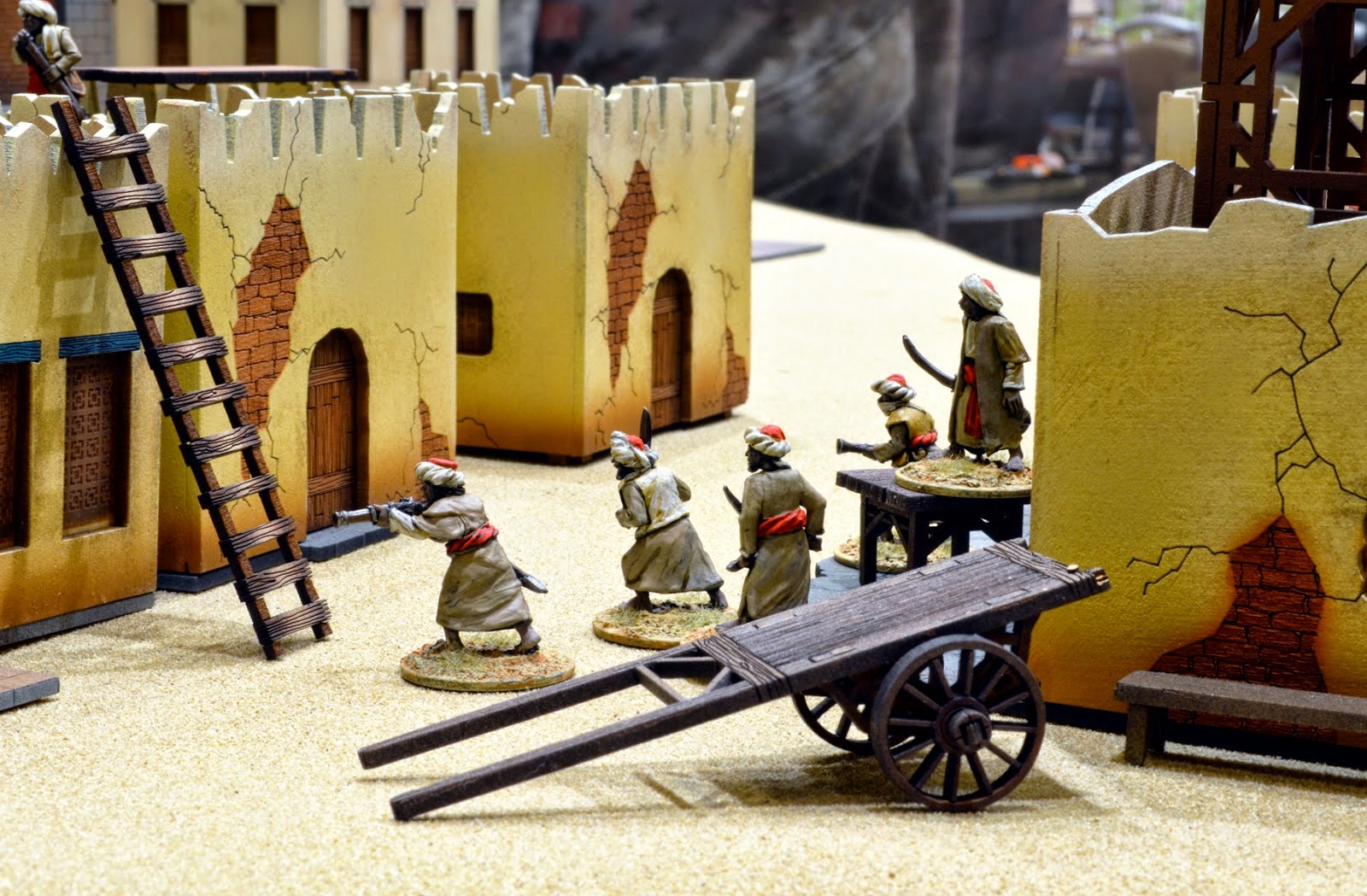 Well Adepticon was a huge success for me as well as the event itself. After a two year hiatus I made it back to the Windy City and had a blast. I played in the LotOW tournament, helped run the Legends of the High Seas game as well as ran the first ever Bolt Action event. I also played in a Gladiator game run by my buddy Merle as well as a Chariot racing game. I also got to hangout with friends and just soaked up everything that was Adepticon. One thing that I realized this year is that I am enjoying helping out more than playing in events. More on that later. 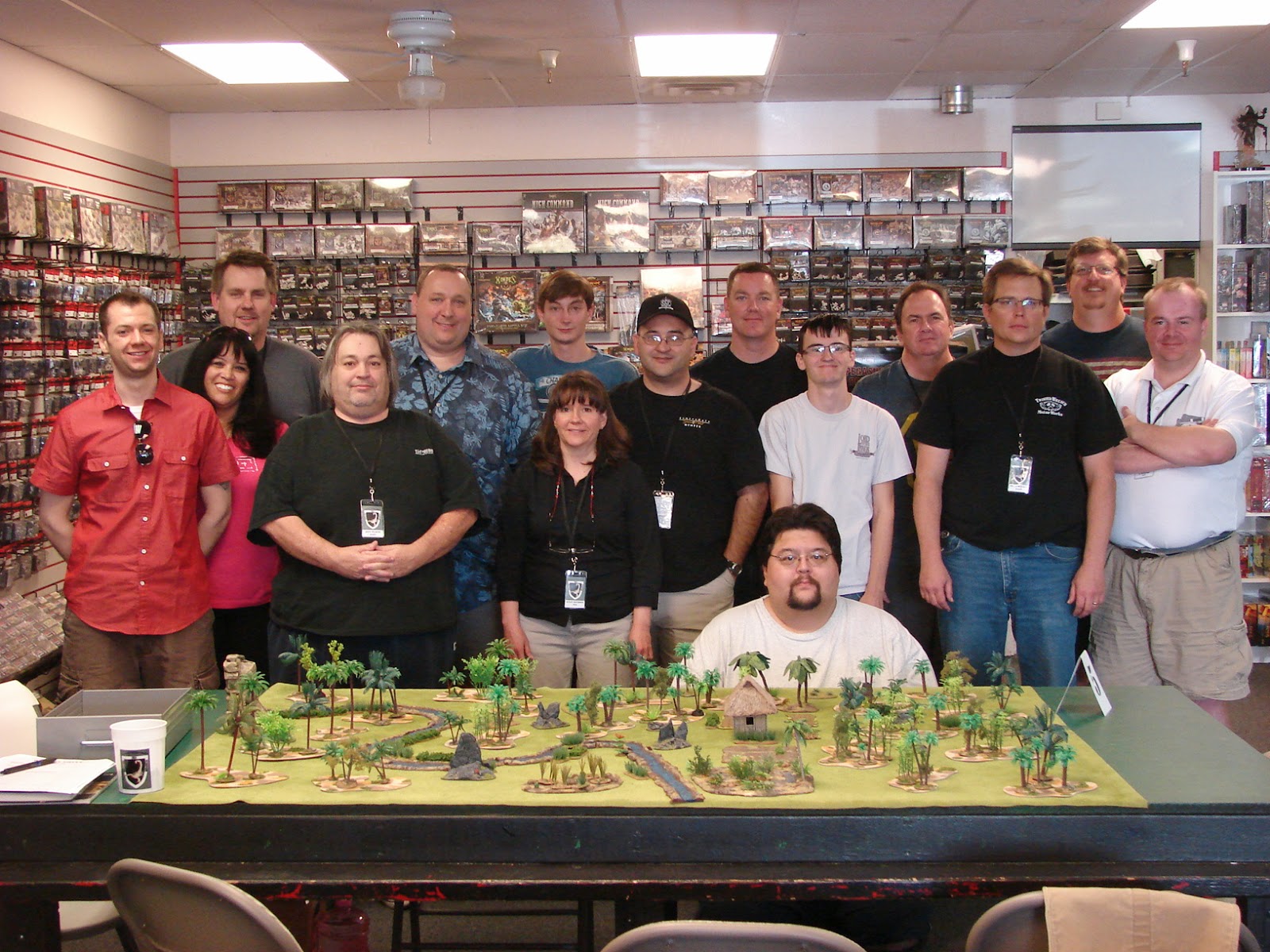 Gathering in the Desert
After five successful Lord of the Rings events and one successful Bolt Action I have decided to hang up my organizer hat. This decision was not made easily and I have had many discussions with the rest of the GitD crew. A few major things brought us to this decision, first up is my commitment to Adepticon 2015, which I will be helping out with next year. I will be assisting and running a few games while out there. The prep work is quite extensive and this will keep me busy right up until I fly back to Chicago. Secondly I am writing a new book and this is also eating up spare time, so no chance to organize. So what does this mean, well it means that GitD will be slowing down on events. We still plan to do some smaller events, so stay tuned.

So whats on the horizon here at Cursed Treasures? well here are a few things:

Saga - As I stated above, Saga will be getting a lot of play in the new year with figures purchased and headed to the paint table.

AWI - American War of Independence will be coming to the table this year in 15mm. Mike & I are going to be doing some Black Powder games in 15mm and we have already purchased the figures from Blue Moon via Old Glory Miniatures. I will be doing colonists while he takes the evil British. AWI will also be on the table in 28mm with Muskets and Tomahawks. I was talked into running a few demos of it at Adepticon. I will also be getting a few of the new Indians from Wargames Factory to do some French and Indian wars in 28mm.

Pulp Alley - Well once again I am running a game of Pulp Alley at Adepticon so there will be more games played here in the valley. I am also working with David Phipps (the author) to write some scenarios for him on his future project for the game, so you will be seeing more of that here. All I can say is it involves a certain person named Vlad the Impaler.

HEROIC - This is the new rule set that I have been working on since Adepticon and on the 2nd of this month I send off the manuscript to start editing and proof reading. So I know there will be some re-writes as well as playing some games, so that will keep me busy.

Flames of War - For Christmas I got a British WW1 army from Robert, so I will be getting those painted up so we can switch gears and start doing some WW1 games. I also would like to start collecting some Fate of the Nation models for the modern conflicts. Not really planning any new armies for WW2 right now, but I will be adding stuff to current armies.

CAV - Well a bunch of guys got into the kick starter and Mike gave me 8 models to paint up. The plan is to start playing this in 2015 and I have already painted up the eight models and now just waiting for the other guys to get there's up so we can play.

So there you go my plans for 2015. I am sure that I will be doing more in the New Year, so stay tuned I am sure it will be an interesting year for gaming.