Painted up a few old west figures for a friend up in Camp Verde for his On30 layout called Thunder Mesa Mining Company which is a model railroad blog that I follow. You will notice that the model railroad layout is based on the Big Thunder Mine train rollercoaster at Disneyland and the Calico Mine Train at Knott's Berry Farm. Dave Meek is an outstanding modeler and I love looking at his layout. 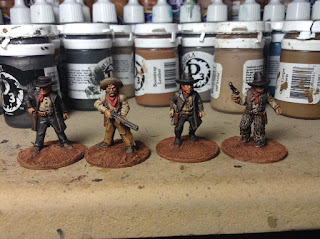 A few weeks ago he did a post on an expansion of the layout and I thought I would send him a few extra old west figures I had lying around to populate the layout. Now these are Foundry miniatures and are 25mm ( or 1/56 scale) and will be pretty close to 1/48th scale figures. So a few hours of work and off went these four desperados to join the Thunder Mesa Mining Co (or rob their trains!). So go check out his awesome blog and once the figures arrive I am sure they will make an appearance somewhere on the layout.