Empire of the Dead has Arrived!


Well, Empire of the Dead arrived here in Phoenix yesterday, which I was surprised that it only took 3 days to arrive from West Wind Productions.  If you are a fan of the Gothic Horror/Steam punk genre, than this game is going to be for you!

First off let me say that West Wind has done an awesome job on the book, they could have gone for a cheaper method of putting out this book, but they went for quality. This book will be around for a long time, the binding looks and feels very well done and I can say that this book will not fall apart after a few times opening it up like some other larger companies books! Page count comes in at 154 pages and are all full color! 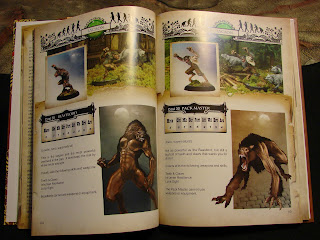 The book is laid out well with with the first 21 pages being dedicated to the background of the world in 1888. Pages 22 - 53 are the game rules are are well laid out as well. I was able to figure out the rules rather quickly after only one read through. Pages 54 - 111 are how you build a faction and equip them. The rest of the book is dedicated to the campaign rules (which look strangely familiar, as much of the rules do). Also there are 3 pages of counters and templates (which can be downloaded from the West Wind Forums). 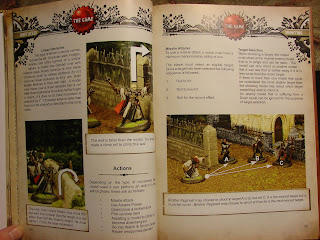 So, some of my friends have asked me why am I so excited about this game, well, first off I have been wanting to do some Gothic Horror gaming for a while. Secondly and more importantly the rules are very similar to a set of rules that I play and that I wrote. (Yes I am talking about LotR and LotHS) Yes folks, if you love LotR and the Legends rules, you are going to love these rules.

EotD uses a D10 instead of a D6 mechanic which is nice and gives a wider spread than a D6. The game uses 5 - 7 figures and plays on 4'x4' boards which is very similar to the Legends games. Another thing that Legends fans will notice is that the Initiative phase, each player rolls a D10 and the higher roll goes first, on a tie it goes to the player that did not have it last turn. And if the roll is tied, you roll again and one person is odd and the other is even. Sound familiar?One thing that EotD does that I could not do with LotHS, was have modifiers for shooting. There are target modifiers and cover modifiers, these are just a few things that make EotD different from the Legends rules. 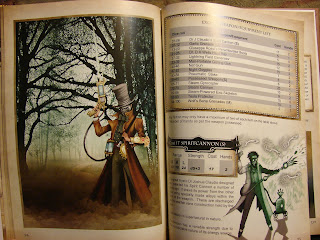 So I could keep going on, but all I will say is if you love the genre and you love the Legends rules, than this game is for you! Go buy this game folks, you will not be disappointed! No folks, I am not on the West Wind payroll, I am just really excited about this game!!

It seems that it has been awhile since I last posted, I have been busy with real life and I have not had much to talk about on the gaming front. But tonight that changes, you see a week ago I ordered a very large order from Old Glory Miniatures, and below you can see what I got in tonight. 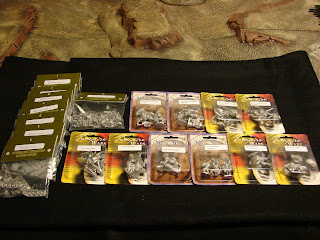 Here is a break down of the order, on the left you will see Seven bags of Command Decision Panzer 38t tanks, this is the start of my 7th Panzer Army for Early War in Flames of War. For those who do not know, this was Rommel's "Ghost Division" in France and he was equipped with 38t tanks. Seven bags gets me 21 38t tanks, that is a few more than I need for the army, but if Flames of War ever gets around to doing a Operation Barbarossa list, these tanks will work out for that as well.

The lone Command Decision bag is a bag of 50 American Rifle men for my Operation Torch force for Mid War games of Flames of War. I ordered a bunch of stuff about a year and a half ago but was short one more bad of infantry men, now I have enough to finish out that army.

Now the Top row of Blisters are from West Wind Vampire Wars line and are the Vampire Counts pack 1, 2, 3 and 5 (I did not like the figures in pack 4). and all of these will be used for games of Empire of the Dead that I talked about in the last post.

The Second row of blisters are more West Wind figures and they are from the Gothic Horror line. They are Acolyte Vampires, Werewolves, Giant Werewolf, Nosferatu #2 and London Thugs. All of these will be used in games of Empire of the Dead as well.

Now I am just waiting for the Empire of the Dead rulebook to get here and I will then start building a few groups to run my friends through some games of EotD.

So there you go, a ton of lead and what you are going to be seeing in the next few weeks...