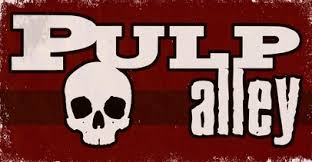 It has been a few months here at Cursed Treasures, where did the time go? Well I am still here and still going strong with gaming. We have been busy moving my mother in law out of her old house and into her new one, so gaming has taken a back seat sort of.

So what have I been up to, well Mike (from Da Green skins blog) and I have been running a few games of Pulp Alley. In fact we are going to run a few games down in Tucson at Rincon 2015 and we will run two types of Pulp Games.

The first set of games will be my Over Due Book Hunt which I ran at Adepticon. 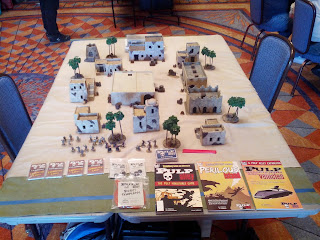 The second set of games are going to be Gothic horror/ Halloween game. Basic idea is that there are 4 leagues, Vampires, Werewolves, Mummies and Monsters. The good thing was I have all the figures and I only needed to paint four figures (or so I thought). I also had two Garden of Morr GW sets. So I set out to paint up everything. Good news is that I got it all painted up and now I just need to do some computer work for the games. So here is the board, excuse the lighting, I was trying to go for a creepy shadow effect with the light, didn't work out like I hoped.


Now here are the four leagues for the game, first up are the Mummies. These are all Westwind miniatures from their Gothic Horror line.


Next up are the Monsters, Which the Monsters and the Bride are all Westwind miniatures. The Doctor is from Pulp Figures from Bob Murch.


Here are the Werewolves which are all from Westwind Gothic horror range, I also use them for Emire of the Dead.

And lastly are the Vampires which are all Westwind miniatures, you may have figured out I like the Westwind figures, they have an almost cartoon sort of feel to them.

So there you go, I hope to get back on the blog band wagon, although I have started using Twitter which my handle is @TimTJKulinski which is pretty quick to upload pictures.