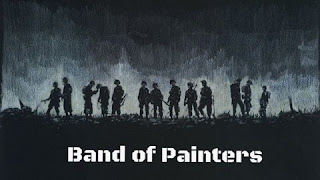 This is the last installment for the Band of Painters Challenge that a few of us set out on back in August. To recap, we were suppose to build 250 points each month to build up a 1000 point armies for either Konflikt 47 or for Bolt Action. So here is my last batch of models for the challenge.

My last batch of plastic Late War Germans, most armed with Assault Rifles and a few with MG42's. I also added in a few Panzerfaust as well.

Here are ten German Heavy Infantry, eight armed with Assault Rifles, two armed with MG-42's. These are really nice models and will work perfectly for many Pulp games when I need some Pulpy Nazi's!

So with that, I would like to point out a few things that I learned on the way during this challenge. First up, not all the armies are out yet for Konflikt 47, the Russians and the British is just now starting to be released, so two of the people in the challenge have suffered when it comes to having much K47 stuff in there armies.

Secondly, the K47 rules are just the Bolt Action 1st edition rules with a few K47 rules added. This made it tough in the beginning when we played games because the FAQ and errata were not out. Clockwork Goblin just recently got out a FAQ, which was the Bolt Action 1st edition errata, why they did not include those updates for the game is beyond me. But it did cause some issues during game play for new players that were not versed in Bolt Action.

Thirdly, the rules are going to pretty much stay like the 1st edition Bolt Action rules, which is going to make playing K47 hard with the 2nd edition Bolt Action rules. I see many people, myself included, mixing up the two sets of rules or trying to use previous/new rules in the games. This had lead a few folks to not wanting to play K47, because the rules are different enough but the same, know what I mean? I foresee myself playing less K47 and more Bolt Action 2 and as I get more familiar with BA2, probably dropping K47 from the main rotation of games I play. Its not a slam against the game, but having two sets of rules that are so close is going to be a pain to try to keep separate.

So is K47 a bad game, No it is not, in fact I like all the pulpy elements to the game. If you ever wanted a game that has Wolfmen, Robots, Tesla cannons and just a cool look of alternate WW2, this is the game for you! And some of the new releases coming out are awesome looking and I will pick up a few every once in a while. As I stated about the German Heavy Infantry, these models will be perfect for any sort of Pulp game!

I hope you enjoyed these installments, I am planning on a new army that is on the way as I type, will be doing a Imperial Japanese Army and will be building this for the Second Edition Bolt Action Rules. This will also be the first army that I will build exclusively for the Bolt Action Rules, all my other armies were for other WW2 games. So stay tuned for some more Bolt Action, it is coming like the Rising Sun!

Posted by Tim Kulinski at 7:40 AM No comments:

February 18, 2017, I will be hosting a Black Powder American Civil War game at our local shop, this game will be an invite only game (but feel free to stop by and watch) and we are planning on a huge table (8'x12'). The battle will be based on the Chancellorsville, May 3, 1863 at the Chancellorsville Inn. The Union troops pulled back from the day before and constructed hasty field works to try to slow down the Confederates that had won the day before.

So with that, we needed some field works for the game, so last weekend I cut up a dozen 1"3/4" x 12" long strips for bases of the field works. Robert then added pink foam and added the planks to the back of them to give then a hasty built look.

I came over this past weekend to help finish up the field works and we also added some angled sections to make the field works look a little irregular and not just in a straight line. Funny thing is when we cut the bases, we just eyeballed it and cut them up. Once they are together they look pretty slick.

We also wanted the field works to accommodate guns, so with a few scraps, I cut out half circles (Roberts Guns are on rounds) and add a few plastic gabions to them. Once these were cut out, we moved onto texturing the foam.

We used an Elmer's Glue sand able wood putty to give us the dirt look. Nice thing was that it was raining here in Phoenix and the temperature was cool, so the Elmer's wood putty stayed wet and was workable. If it had been hotter out, it would have dried before we got it on the material, such is the problems of working on terrain in the Valley of the Sunstroke!

So there you go, a few field fortifications for our Black Powder game. The good thing is that we could use this for other games as well, heck, I even mentioned these would be good for Bolt Action for World War One! (Are you seeing this Warlord???)

Well,
My new set of rules moves another step closer to seeing the light of day. I received a PDF copy of the main rules with pictures added in. HEROIC will be published by Winged Hussar Publishing and the pictures and internal layout are being done by Dave Taylor Miniatures. Here are a few pictures of what the book will look like, well on the inside anyway. 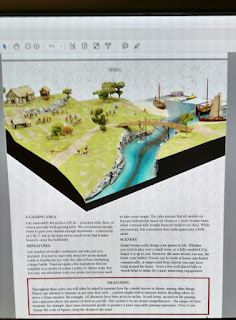 So, you may be asking yourself, what is HEROIC? Well this ruleset is my attempt to do a generic set of skirmish rules that will allow you to game most periods in history or in the fantasy/sci fi worlds. It was born from my local game buddies always trying to find the next set of rules that we could all game with. Right now it is just the core rules and in time I plan to release supplements for a variety of historical periods as well as for other worlds of fantasy. 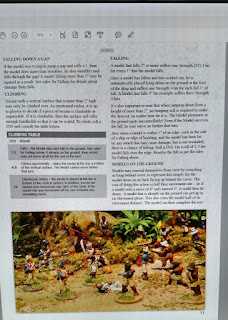 The game was born while I attended Adepticon back in 2014 when I ran into Vincent Respond of Winged Hussar Publishing. In fact, Dave Taylor is a regular at Adepticon and a lot of ideas for this set of rules came from friends that also attend Adepticon. 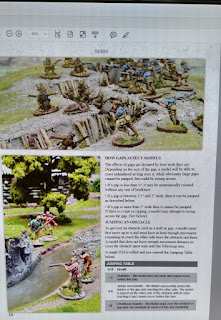 ﻿
So now I am just waiting to see what the cover will look like, I added my two cents, but its a wait and see now, but we are getting closer to HEROIC being unleashed on the gaming community!