No this is not a rant or prediction of Adepticon 2011, it is a post about how I will not be able to attend this awesome event this year. For those regular viewers here at Cursed Treasures, you know that I have attended Adepticon for the past 3 years and have posted coverage about my travels to the Windy City.

But alas, this year I will have to sit on the sidelines and watch get my Adepticon fix like many people from other folks. You see, it has been a rather tough 2 years for me (out of work for almost that entire time) and the "play budget" for traveling has been used for more important things that real life throws at you (like keeping my house and paying my bills!). So I had too make a rather easy decision and tell my good friend Hank, that I would not be able to attend this year.

Well as luck would have it, I found a new job (yeah!!!) but do not have the time saved up for any sort of vacation trip to the Windy City. As a side note, my good friend Hank, kept sending me e-mails about cheap airfares that he found on some airlines even days before this event. But it still comes back to being responsible and doing the grown up thing and pay my bills. You see there are a few reasons why I am depressed that I do not get to go this year.

First up, as some know, I was the guy that helped get the Warhammer Ancient Battles tournament (Singles and Doubles) event off the ground in Chicago. The guys playing WAB are some of the nicest guys and the event is growing. When I had to bow out, I turned over the event to Rich Nelson of the Chicago Terrain Factory blog. Last year Rich and I (well Rich really) launched a successful WAB Campaign at the event for the singles event. Well Last year after years of belly aching, I got them to do a Dark Age Campaign (my favorite era) for this year. So the year I can't make it, there will be more than a few players playing Dark Age Armies!

Secondly, my other good friend John over at Plastic Legions is running a Legends of the High Seas Campaign event at Adepticon this year! 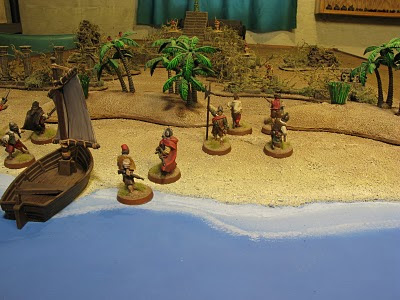 (Picture from Plastic Legions Blog)
John ran a successful Legends of the High Seas Campaign a few years ago for his local gaming buddies. Last year while John and I had down time in between events, I talked him into co-running a LotHS event for this year. But once again the bad economy laid to waste my plans to attend. I had hoped to support John by painting up my Old Glory ship and shipping it out to him to use for the Boarding action scenario. But once again best made plans sunk to the bottom of the ocean. Time and an issue with my Old Glory ship kept me from sending the model to him to use. So another cool event that I will not get to participate in.

Thirdly, I will be missing the awesome Lord of the Rings event run By Jamie from the Blog of Five Armies Jamie is one of the reasons why Gathering in the Desert happened 4 years ago. It was because of his love for Lord of the Rings game that inspired me to run my event. So once again I am going to miss one of the coolest LotR events in the country!

And lastly and probably the biggest one really, is I will miss out on hanging out with all the friends that I have made over the years while attending Adepticon. The main reason why I play games is for the social aspect of it. And Adepticon is the peek of social gaming, yes there are hard core gamers there doing the tourney thing, but a lot of guys go year after year because of the same reason I go, to hang out with friends once a year. So I will not get to hang out with some great friends.

So there you go, as I stated above, I will be like everyone else that can't make Adepticon this year and following all the coverage from other folks that got to go to one of the coolest game events on the planet!

What have I been up to since Gathering in the Desert you might be asking (or maybe not)? Well I have been pretty busy. Saguaro Painting Services is keeping me very busy, which is a good thing. Only down side is that I do not have time for my own models!

Also, for those who have not heard, I got an invite to the Throne of Skulls Games Workshop Event in June. It seems that they kept a few places open for Tournament Organizers as a way to say thanks for all the hard work we do. Well the wife and I will be going, I will be playing with toy soldiers, while she will be playing the slots!

As for the army I am taking, well it was a toss up and I actually lost sleep over it. I finally decided that I would take a 62 figure Mirkwood Wood Elf list. The only issue is I have to paint them and God knows when I will have time!

Also been busy tinkering around with 40K and had a few friends over last Friday for some Combat Patrol action. It looks like I will be planning a Combat Patrol event in September with a buddy of mine.

Also this weekend I am suppose to make a trip out to another friends place for some LotOW. I will have a small write up after this weekend.

The only problem with being so busy, is that I don't have time to write it up here. And to bust out the camera is a chore! I will need to step it up from here out, so stay tuned...