Last weekend I got to Demo CAV: Strike Operations to my buddy Tom, it was also a quick chance to see if I was able to break down the rules for Talon Games into a quick play demo style of rules. I was given the task from Jon Walker of Talon Games to create a 4 or 5 page set of the rules just going over all the basics.


With two fully painted starter sets, Tom and I set out to demo the game. All in all I nailed all the core mechanics of the game, although I did forget to add the section about damaging (which I have corrected). 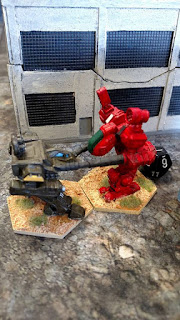 As well as showing Tom the game, I had a few folks come by to see what we were doing, it seems that Big Stompy Robots are a draw! Tom enjoyed himself and actually won the game by having only his Starhawk alive at the end of the game. 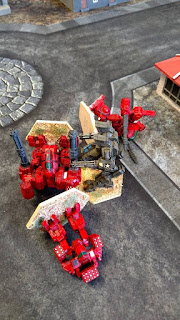 All in all it was a great showing for CAV: Strike Operations. In a few weeks I will be doing more demos and may hit up a few other stores in the local area as well as possibly heading down to Tucson to show off the game.

So as I mentioned above, I am contributing to Talon Games on CAV:SO and will be doing some further writing for them in the very near future. I will also be going down to Reapercon/CAVcon in October to help run games as well as answer questions about the game and future projects.

I have also set up the CAV: Strike Operations HQ Facebook group and I am the Admin for the group. I am also running the first ever CAV: SO paint competition on the group with prizes for 1st, 2nd & 3rd place, this is all being hosted on the CAV:SO HQ group at the above link.

Besides that, I am also working on my  Malvernians and have a new battle group.

I am thinking of taking this group to Reapercon/CAVcon in October, I have a few more models to paint up.

Oh and I am about to start writing my first ever fiction book, which I plan to self publish on Amazon. I have the blessing of Talon Games to set the book in the CAV: SO universe. In fact this weekend I plan to do a story synopsis of the book, I am a little nervous about writing fiction and I will not lie, it scare the pants off of me. But what scares us makes us stronger right???

So lots of CAV: Strike Operations going on around here, but I will confess, all these new GW games is making it very hard to stay focused on CAV!

With my brother moving out to Arizona, we have had a resurgence of Warhammer Quest. You see back in the day, we used to play the crap out of this game, our wives also enjoyed exploring the long lost dungeons and we all had characters that were starting to get pretty far advanced in levels. 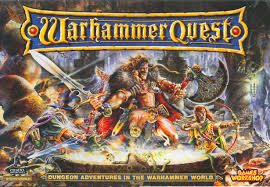 But all good things pass, my brother and his wife moved out to Georgia, I moved out to Arizona and pretty much the game went up onto the shelf. Yes I did bring it down for a short while and actually ran a few games for a group of folks at my local store. But I was on to other games and slowly Quest slipped into the past.

During this long slumber, I actually acquired another almost complete set of the game from a friend that only really wanted a few of the miniatures. This second copy went up onto the shelf with my copy and there it sat.

Then about 6 months ago, my brother gave me the news that he was relocating to Yuma AZ, (I am in Phoenix) and he came out to stay for a weekend. While out he suggested we bust out Quest again. Now my good friend DrunkenSamurai mentioned he would be interested in trying out the game. So when my brother made the trip out, Quest came down off the shelf and hit the table again. 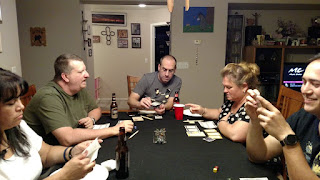 So with that, I set up a game night, which included my wife, my son (who loved watching us play back in the day), Drunken and his wife as well as my brother. I choose the DM role, flipping cards and running the monsters. A great time was had by all. We all agreed that we would retain the characters for the next time we all got together.

Well a few weeks pasted and my brother made another trip to the valley, in which prompted another night of Quest! Fun was had by all, except my wife, who's Wardancer set off a trap and fell into a pit, which wouldn't be so bad, but the group forgot to bring a rope and the Wizard did not have a levitate spell, so her character was trapped for eternity in the pit! So is the Warhammer Quest Gods, they are brutal at times.

Then last weekend I was visiting a friend in Kansas and he just happened to have the last piece of the Warhammer Quest puzzle that I needed, the Catacombs of Terror models! I had the campaign pack, but no models. So with an agreement to paint for him, I secured the models.

Then just today, my brother informed me that he would be back up in Phoenix on the 20th, and his game of choice, you got it, Warhammer Quest! So it looks like I will be painting up a bunch more models for this game night.

Which got me thinking, I need to start putting more paint on these classic models, I also need to come up with a better way to store said models. Right now they are just thrown into a box, no rhyme or reason, painted with unpainted. So I think I am going to try to paint up at least one new (old) model a week. I will try to get more done, but at least one a week is doable.

So it looks like Quest is back on the table, my family and friends are enjoying it and so am I. In fact I think I will take up more of a DM roll and actually design adventures instead of using the cards, that was always my goal, why not get started now on it!