It's been a real productive week here in the Valley of the Sunstroke, I have been on a painting terror. Besides my own stuff this week, I also completed a couple of commissions on the Saguaro Painting Service side as well.

Anyhow, lets get to what I did for myself, first up some awesome Plastic Soldier Company Panzer III's 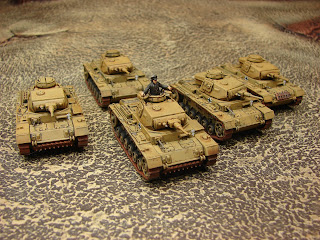 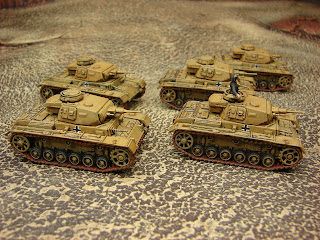 I really love the PSC models, in my opinion, these are much better models than the Battlefront vehicles. They look much better and scaled correctly compared to Battlefront miniatures. The only draw back would be you have to do more assembly than a Battlefront mini, but it is not a problem for me since I enjoy building models.

Next up is another PSC model, a Panzer IV F2 which is one of the iconic tanks of the desert war for me. And once again, PSC knocks it out of the park with this model! 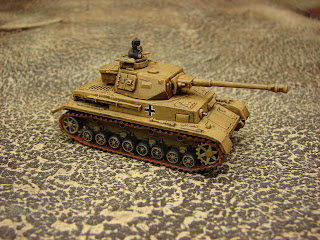 I also needed to do one more command tank for my American tank force, so here is another PSC (can you tell I love PSC tanks?) tank, this time a Sherman tank. Now I have added a Battlefront driver since I liked the pose of the figure. 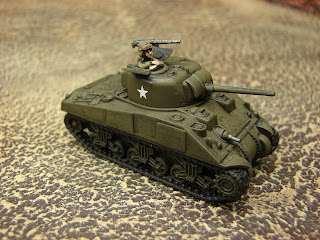 Now onto the big project, my American Infantry army, which is made up of Old Glory miniatures. There are 2 Rifle platoons, a Weapons Platoon, 2 Heavy Machine Gun platoons and a 81mm Mortar platoon. This force represents the Americans in Africa when the US enters the ground war. 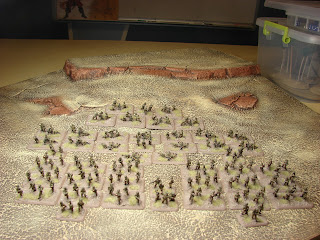 Here is the Company Command (Left BF) and the 2IC (right OG). 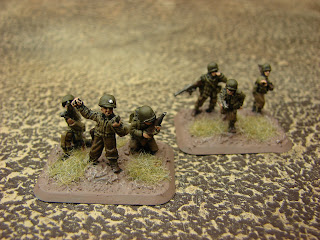 There are two nine man platoons, these are all Old Glory figures. 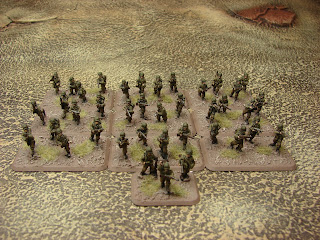 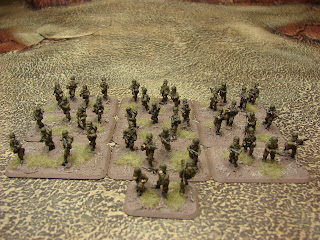 Next up a Weapons Platoon (OG) 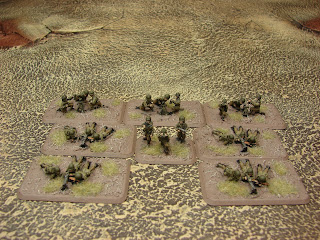 Here is one of two Heavy Machine Gun teams (OG). 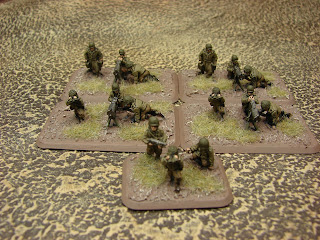 And lastly a platoon of Heavy Mortars (OG). 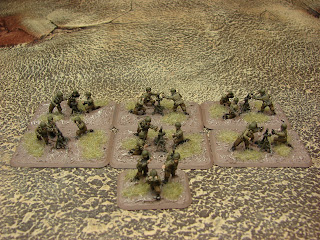 You may notice that I have a lot of Old Glory miniatures and the only BF models are the Company Command team, in which they are from the Infantry Ace pack. 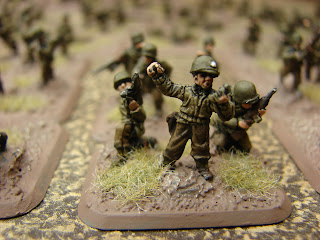 There is a reason for it, having painted hundreds (maybe even thousands) of BF figures and for the most part, I am not impressed. They seem to be chunkier than most figures and really do not have a ton of detail. Old Glory on the other hand seems to be skinnier than most and the detail is better than BF figures. But that is just my opinion. 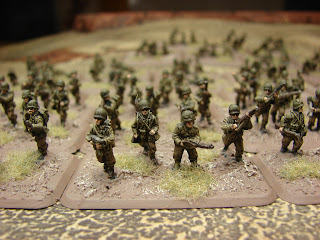 So after all the hard work, Robert and I decided to throw down a 700 point Infantry game. Here is the table with our deployment (we were playing Breakthrough). I was playing Americans and Rob took his Fallschimjager force. 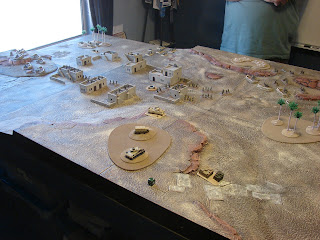 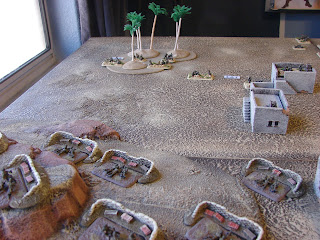 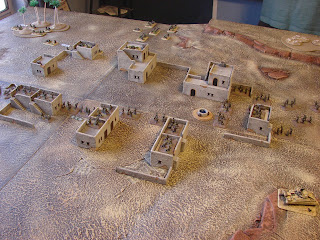 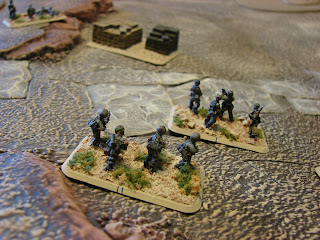 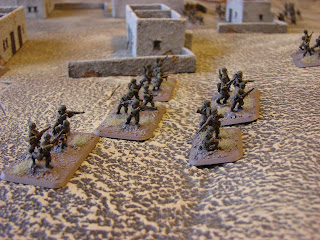 Well after 6 turns, the Germans took an objective and won the game (lucky bastard!). So there you go, a ton of 15mm within the last few days with more to come... 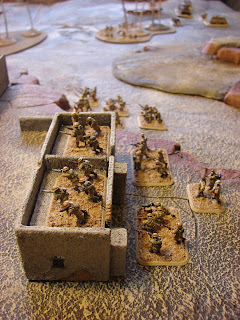 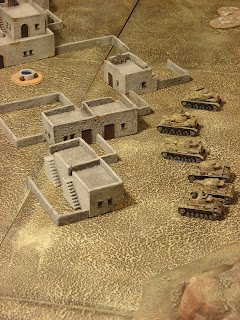 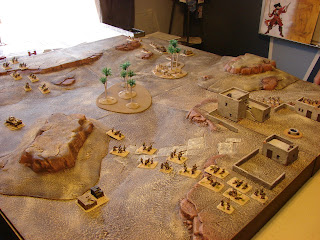 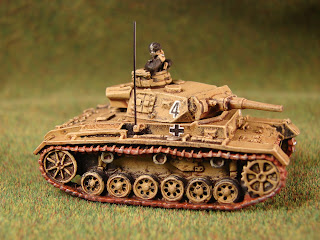 EotD on the Table!

I was finally able to get Empire of the Dead onto the table today for a few friends that are very interested in the game since my last two posts. Anyhow I  figured it was a perfect day to have a few friends over and what a better time than to play EotD, plus I need to get the hang of the game since I will be running Demos in a few weeks at my local store.

So armed with the rulebook (sent to me free from the fine folks at West Wind for doing demos) and my huge collection of West Wind Miniatures (That I purchased on my own before EotD came out) and my huge terrain collection, I set up to do some demoing of the game.

I set up two small factions of about 95 points average each  (that is 4 models a side). I choose the Lycaon faction (Werewolves) and the Nosferatu Faction (Vampires). I choose to play the Fracas scenario and did a generic woods table with a ruin in the middle. 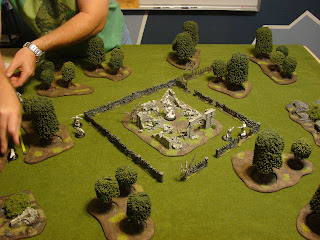 The Lycaon faction had a Beastlord, two Wolves and one Wolfskin armed with a wooden stake and two Handed Weapon. The Nosferatu had a Graf with a sword, Consort with two knives and a Bat Swarm. Oh, by the way, I did not take pictures of the first game, the pictures are from Mike & I's game. 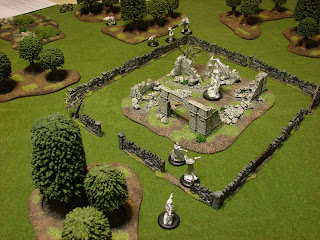 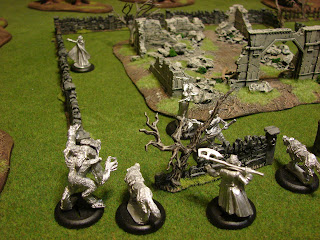 The game took about 45 minutes or so and that was with us looking up some of the rules. Once again, if you are familiar with EotD predecessors (Mordheim, Necromunda, Legends and LotR) you will pick up the game rather quickly, both Jerry and Mike got it real quick. 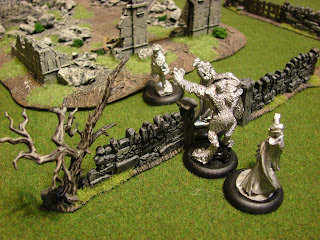 So with the first demo games under my belt, now I just need to get to painting my figures. The good news is that three of my friends (Mike, Jerry and Rob who just watched) are interested in the game. So stay tuned folks, there is more EotD on the horizon!