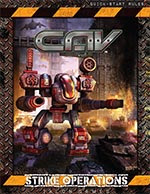 Its been a short while since I last made an update, so here we go. Today's post is on Talon-Games CAV Strike Operations, a game about Combat Armored Vehicles (aka CAV's) or big stompy  robots! I first heard about this game from Reaper Miniatures sometime around 2010 or so while at my local game store here in town. Back then all the models were metal and I contemplated picking it up, but never did. You see, I was a big Battletech player many many years ago and ever since I left that system I toyed around with getting back into a robot combat game. But for whatever reason, I never picked it up and to be honest, I even picked up Heavy Gear and tried playing that, but just could not get into it.

My next run in with CAV was when Reaper Miniatures announced the new Kickstarter for CAV Strike Operations and the CAVs would be in Bones Material. Well a bunch of friends here got excited and backed the Kickstarter. Sadly I did not due to financial issues. But I had at least 4 friends back it, and my buddy, Mike over at DaGreenskins Blog,hooked me up with the first eight models Reaper did in the white Bones material. Then we had to wait for the kick starter to be fulfilled. So once the models arrived I got to painting them up with ideas of writing our own rules for Robot combat fighting game.

But as things go, life got in the way with my own rules for robots fighting and the Kick starter dragged on. Also the white bones material was rather interesting to work with. The models I was given had slight bends in them on the gun barrels. I followed the Reaper instructions for heating them and cooling them to straighten them out. That last about 4 days and the bends came back to them. Last time I was at Adepticon, I even asked the Reaper guys about this and they were shocked that I was still having issues. I finally had to drill out the gun barrels and insert brass wire in them to keep them straight.Needless to say, I was not feeling very good about this new material and had reservations about the game.

Well the game finally came out and the new grey material was much better than the white stuff. But by the time all the guys here got their stuff, they were pretty much ready to move onto something else. I think part of that is the Kick Starter bubble, people get excited about these new games and then forget about them and move onto the next game or fund the next project.

Well about a year ago one of the guys that got all the stuff in the KS, asked if I was interested in picking up his set for the amount he paid into it for a trade in paint. So that following weekend I had a huge box of CAV models and more importantly the CAV Strike Operation rules. I wish I could say I was super excited about it, but I filed the models into the closet and the rule book onto the shelf to be looked at later.

Well, at the end of last year, I decided that I wanted to take a hard look at CAV SO again, so I pulled out the rules and started reading. I started to enjoy what was in there, in fact I then pulled out all the CAVs and started to assemble them and base them up. Then I found out that my buddy Merle in Kansas, was interested in the game as well. So he and I started talking about the game. He told me that he had talked with the author, Jon Walker while at Reapercon last October. If Merle was into the game i knew it had to be good. So with that I started going through the book and identified the faction I wanted to build, The Ritterlich Republic, a strange Germanic force that had a very WW2 vibe to them. SO with that I decided to paint up a few more CAV's, below are two Ritterlich CAV's, the Cataphract and Cougar, these are two CAVs from the 92nd Schwarzenwald Brigade, the Panthers. 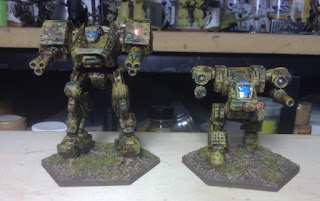 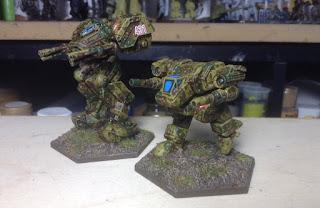 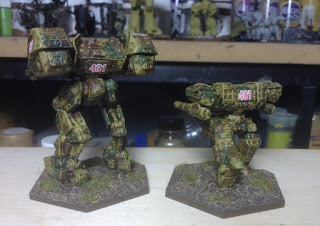 I have about eight more Ritterlich CAVs to finish, but I am super excited about this game and you will see more CAV Strike Operations here on the blog in the very near future. So if your looking for a cool Robot combat game that is pretty cheap to get into, than CAV Strike Operations is for you! Now recruit, get signed up for some CAV combat!