A while back, I stumbled onto a Fistful of Lead Reloaded rules on another blog I follow, Wargames and Railroads which is a great blog by the way. Anyway, Kris the blog owner did a review of a few Old West rule sets and honestly, I was not looking for another set of rules since I was happy with Legends of the Old West. But the problem with LotOW is that it is out of print and it is hard to get new players to play as most want the rule book. So after reading Kris reviews on the different rule sets, I found myself looking at the Fistful of Lead Reloaded by Wiley Games run by Jaye Wiley. 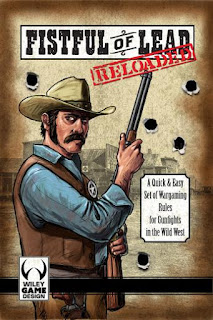 Now I have been stopping by Jayes blog for years from time to time and never put two and two together that he wrote FfoL. But after reading the review I picked up the rules and gave them a try with my buddy Robert. We were both happy with how simple and fun the rules were and it was not too long of a game. We both said we will need to get this back on the table.

Well about a two months ago, I ran another demo for my friend Richard and once again, I used the FfoL rules. It proved too be a very fun game once again and it took very little explanation to get Richard up to speed with the game, in fact it took about 5 minutes to explain everything.

The game I ran for Richard brought a lot of folks around the table and the use of the playing cards for activation, just made everyone get into the mindset of Old West gaming. So with a nice looking table and a quick fast playing rule set, how can this not be a crowd favorite.

So after thinking about the games I ran and played in, I went over to Jayes site and ordered a few more items from him. I picked up For a Fistful More book, which is a nice scenario book for the game. I also ordered his laser cut tokens since it seemed wrong to use the LotOW counters. I also picked up his special playing cards, these have all the special rules on them, you can use regular playing cards, but heck, why not have these cards.

I also order Viva la Revolucion for doing the Mexican revolution, can you say Wild bunch??? And I also picked up his Horse and musket rule book as well for my buddy Robert. I am curious to take a look at it for some Pirate action! So i see many games of FfoL in the very near future, in fact I may be taking running a few games of FfoL at a local con in July, still working out details.

So if your looking for an affordable fast and fun Old West game, Fistful of lead Reloaded is right up your alley, I highly recommend it.

Yeah thanks...just what I needed another project or two. Now I will have to get back to painting my Mexican Revolution figures. I am also thinking of Napoleonic skirmish gaming in Spain.

Sorry Robert, but look at it this way, you already have the figures!

Let me know how the July game goes.
-J