Where has the time gone?

It has certainly been a very long time since I posted here, you may be wondering why? Well I just haven't felt like posting, I mean I have tried posting but then the urge passes and I am onto to something else. Also it seems that most folks (myself included) have switched over to posting either to Facebook or Twitter. Another thing that a few folks have mentioned on other blogs, it seems that blog readership is in decline. Well that is true, most of the blogs I do follow are in the same state as mine, so in order to try to reverse that, I am going to start reposting here.

So with that I guess the next question is what have I been up to then? Well recently I have been drug back into the GW hobby! You see, GW has been revamping their "Specialist" games. Well GW re released Blood Bowl. Well BB is my weakness and I knew I had to have it! 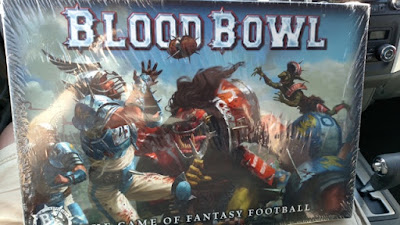 So now with the new box set in my hands I started,working on a proper Orc team. You see out of all of the teams I have collected I never built a Orc team for myself. A few years ago I did scratch build an Orc team for my son out of GW fantasy kit models.

Well not be happy with stock models I started to convert the models. You see I hate to have duplicate models, and converting is part of the hobby after all.

With that, the Azog Orkinals were born, since I am a Arizona Cardinals fan, it seemed like the rich choice for the Orks, plus Orks love red, so I came up with Red white and green as the colors.

Well after I did this team, I sort of dug out a few of my older teams and started working on them. Since I first started playing Blood Bowl, I always wanted to,build a Halfling team,. Too me it is just plain funny that Halflings would want to play Blood Bowl and the size of the models is jfunny to see on the board.

Well for years I have been slowly collecting models and finally I had enough and decide to get them painted up as well. Going with the funny side, I decided to paint them up in the Tennessee Titans colors, because after all, Halfling are such a might team!

And then my brother and I got in a game and he said he would like to play a dwarf team. So once again I busted out a few models and asked what colors to paint up this new team. Well my brother took one look at the models and said how about purple and white like the Minosotta Vikings. 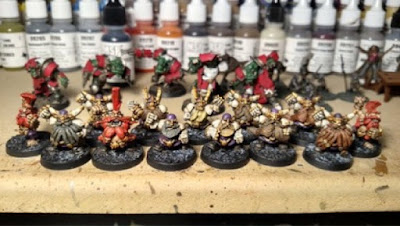 So there you have it, a few new Blood Bowl teams for the new year. So I will start posting more this year to try to reverse to decline of blogs and get back to doing my hobby here. So stay tuned for more content on Cursed treasures. And remember to Eat Pacos Tacos! 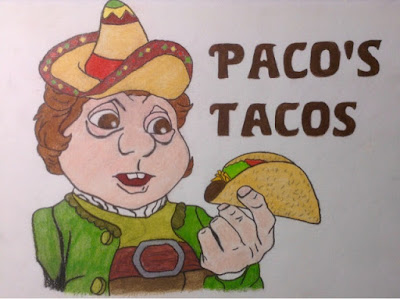 Glad to see you back posting, and loving the BB players! I've a human team that's been sat half-painted in the queue for at least half a decade that I keep meaning to get round to finishing...

Yeah it does feel good to be back blogging, I was being lazy and using Twitter & FB, but I am back to this. And dont feel bad about figures awaiting finishing, I have a bunch of BB figures that are that way.