Today, Robert, Tom O, Joe and myself threw down a game of American Civil War using Warlords Black Powder rules. This game has been in the works for well over a year now and I have to say it was well worth the wait. We met up at Imperial Outpost and set up a 8' x 8' table and did a very generic looking table. 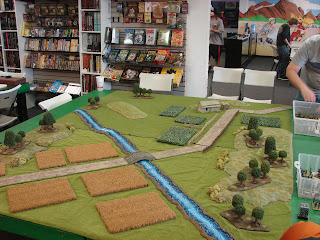 Robert and I took command of the Union troops, while Tom and Joe took the Confederates. The Rebels were to hold the bridge in the middle of the board, while the Union was trying to take the bridge themselves.
For the life of me, I can not remember which units were represented on the board, but we each had about four units plus a gun. I will leave the more formal descriptions to Robert when he posts up his battle report. So for now, here are some pictures that I took while playing the game. 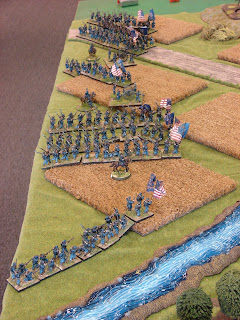 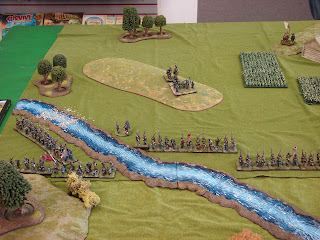 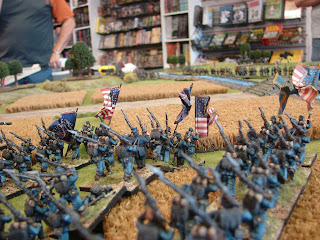 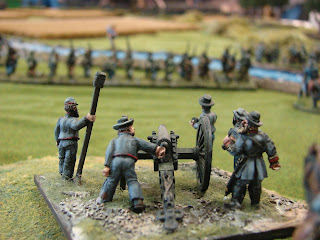 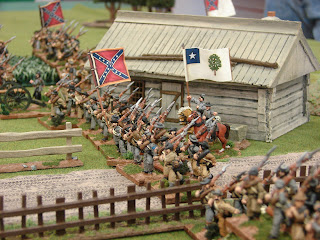 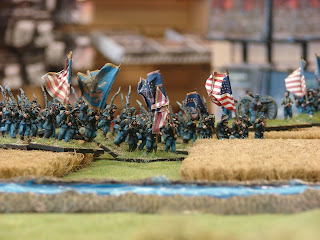 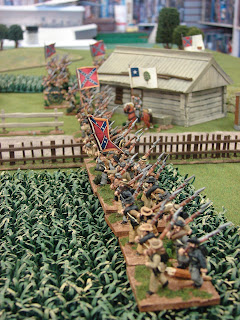 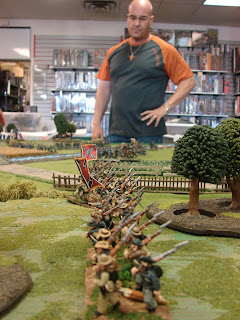 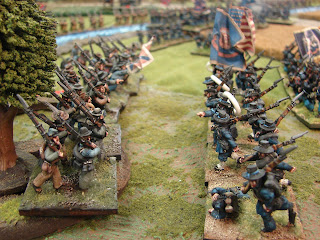 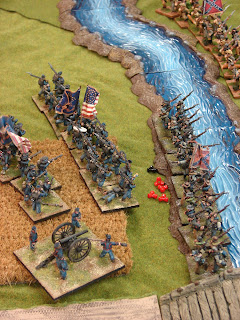 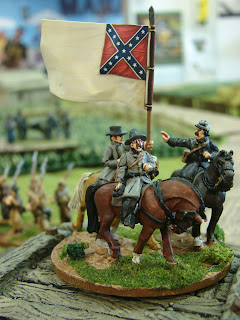 So we played for about 2 hours and had a blast! I really like how the game played out and looked on the table. Everyone that stopped by enjoyed the way the game looked and we had a lot of complements, the best one coming from a 8 year old girl who said, "That's Cool"!

Needless to say, I am already planning to start building a few American War of Independence armies for my own big game. Hell I am even thinking of building a Napoleonic army as well, we also talked about using the Black Powder rules for some early WW1 games! So in a nutshell, I really really liked the game and will be spending my money to build armies for this game.

So long Games Workshop, I'm off to bigger and better things!

Nice pictures! Don't worry about the units, none of the Union troops were in named units except the one regiment that was mine. I think all the Reb units were named but I never knew who we were fighting.

Excellent to see you guys playing Black Powder, it really is a fine game system, as is its derivative for Ancients - Hail Caesar.

Just in case you ever fancy dusting off the LOTR figures, there's a yahoogroup for that too for it!

I'll be watching your progress avidly!

The game looked great on the table, and the rules didn't seem too fiddly.

So who won the game?

@Scott, like I said, it has been about a year that we wanted to get the game on the table and we are glad we did. You will see more BP action here I am sure.

@ Jerry, well we called it a Draw, I was the first one to go out, followed by Joe. Rob was holding out pretty well but he was taking damage since he was fighting Joe. Tom was in good shape and if we would have kept going, the Rebs would have won.

Looks great! Nice to see BP being used for something other than Naps.

SpencerRKeller said...
This comment has been removed by the author.
5:24 AM

Nice pictures of a nice looking game and table Tim. The Confederates I ran represented Barksdale's Mississippi Brigade from the Gettysburg campaign; at least those are the flags they have. I enjoyed the game and look forward to playing more in the future.