Well, as the title states, we are now 45 days until Gathering in the Desert 2010!

This year is shaping up to be better than last year, here are a few highlights for this years event. 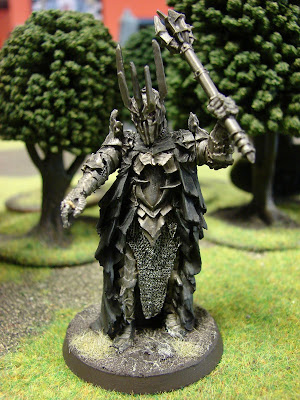 Do you have the will to make the journey all the way to Mount Doom? Come find out as we are proud to present the March to Mount Doom Madness Tournament as part of the 2010 Gathering in the Desert Lord of the Rings Grand Tournament. This event is being run by my good friend and last years Overall Champion Brent Sinclair.

The March to Mount Doom tournament will feature a unique “bracket-style” pairing system and players will play their way trough a single elimination tournament during the course of the evening. This event is being offered as a "free" add-on event for the Gathering in the Desert tournament. So even if you are not planning on attend GitD (God only knows why you wouldn't!) will be free on Friday night for anyone to attend.

The March to Mount Doom will be played on Friday, February 19th at Empire Games. Registration will start at 5 PM. All games will be limited to 50 minutes in length so prompt play is required. Registration on site will start at 5pm with the first round games starting at 5:30pm. The winner should be crowned no later than 9:30pm.

Army Requirements for this event are the same as those for the Gathering in the Desert Main event (e.g., armies assembled using Legions of Middle Earth, etc) with two exceptions. The maximum points allowed for an army is 500 points. In addition, following the MAXIMUM model count is 15. So this means you can bring out those heroes that you wouldn't dream of using in a larger scale event! So bring out your best for this clash as you fight your way to the top of Mount Doom.

Army lists will be checked for accuracy the evening of the event so be prepared with extra copies of your army list. All models must be painted to a minimum three-color tournament standard.

In addition to crowning "Best Overall" Champion of the tournament, and "Best Army Theme" award will be given out. This award will be voted by players choice using a blind ballot system. Since this event is a single elimination tournament, half the field will be eliminated in each round. So while the tournament field will get smaller, it is the hopes of the organizers that those eliminated players will enjoy the opportunity to play "pick-up" games for the rest of the evening.

Saturday & Sunday - Gathering in the Desert 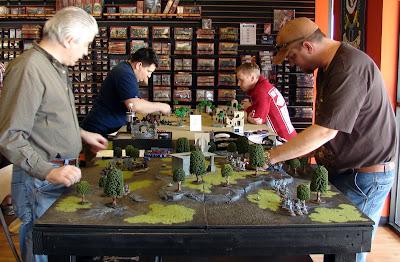 Here is a list of the scenarios for the event:
Day One
Game 1, Storm the Camp - This strategic ground has been contested for many years, with two rival encampments each vying for control. Now the time has come to decide the dominant power in this land once and for all by seizing the enemy's foothold and scattering it's defenders.
Game 2, Domination - The battlefield must be held! The army that controls this area will be at a distinct advantage in days to come. Dominance here can only be achieved by driving the enemy back from several key points, failure is not an option.
Game 3, Bilbo's Treasure - Bilbo is ready to return home, he needs to find his treasure chest of gold and return back to Hobbiton. 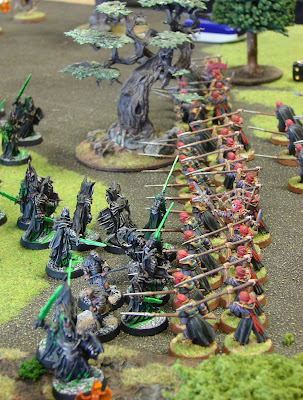 Day Two
Game 4, Contest of Champions - It is the turning point in the war, and the leaders of both sides know that they must inspire their followers to great deeds. With a rousing speech they lead their armies onto the field of battle, striving against the foe with all their might...
Game 5, The Artifact - An Ancient and powerful item has been discovered in the wilds of Middle-earth, a token mighty enough to swing the tide of war. Within hours of it's discovery, two armies redirect their march to it's location, seeking to claim it for their own cause.

After long discussions, we are proud to announce that we will be catering lunch on both days of the event. We will also be going to dinner on Saturday night and Sunday night as a group to talk of all the glorious battles. This will be on your own dime and is a great way to unwind from a hard day of battle.
Also another highlight is we are expanding another category in the Red Dragon painting competition. We are adding a Best Cavalry award, so enter your best mounted model as long as it is on a 40mm base, anything larger will be in the Large model grouping.
This year is going to be huge, with a ton of A list players from all over the country coming out to see who will be the Best Overall player. Will Brent Sinclair be able to defend his crown? Will Frank Brown look to make a comeback or will a Arizona local take the crown, come and find out at Gathering in the Desert 2010!
Just a reminder (mostly for the locals) pre - registration closes on January 17th for the shirts. Registration will remain open until February 14, 2010. So if you want a shirt, get your registration in now, if not shirt prices will be $15.00 at the event and there will only be a few extras.Also I need your army list for the event by February 13th, and you can e-mail them to me at TJKulinski@cox.net
So hope you can make it, this will be a great start for Lord of the Rings Events being run all over the country...
TK
Posted by Tim Kulinski at 7:50 PM

Labels: Gathering in the Desert, GitD, Lord of the Rings, LotR