Ruins and another Pulp!

I have been busy working on a few ruins for the up coming Gathering in the Desert event that I am running for Bolt Action. Over Christmas I picked up a set of Warlords Ruined Hamlet which includes three ruined buildings. I built up the ruins and mounted them to MDF and went to work painting them up. Now I have to say I wanted to go to town on these with more rubble. But what I have found is that it may look cooler with more debris, it usually doesn't lend itself for playability. So I kept these relative clear of debris going for playability over realism. 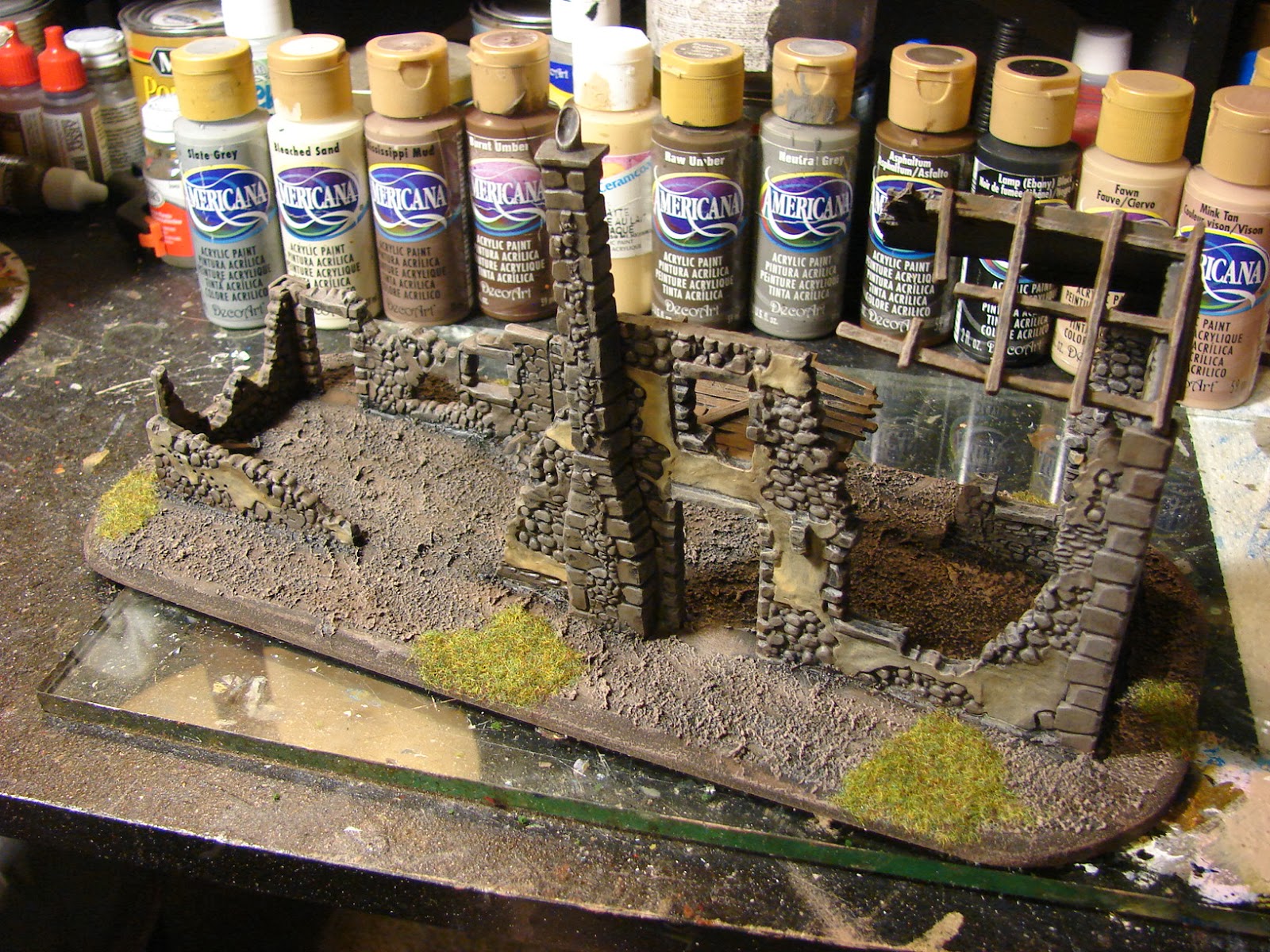 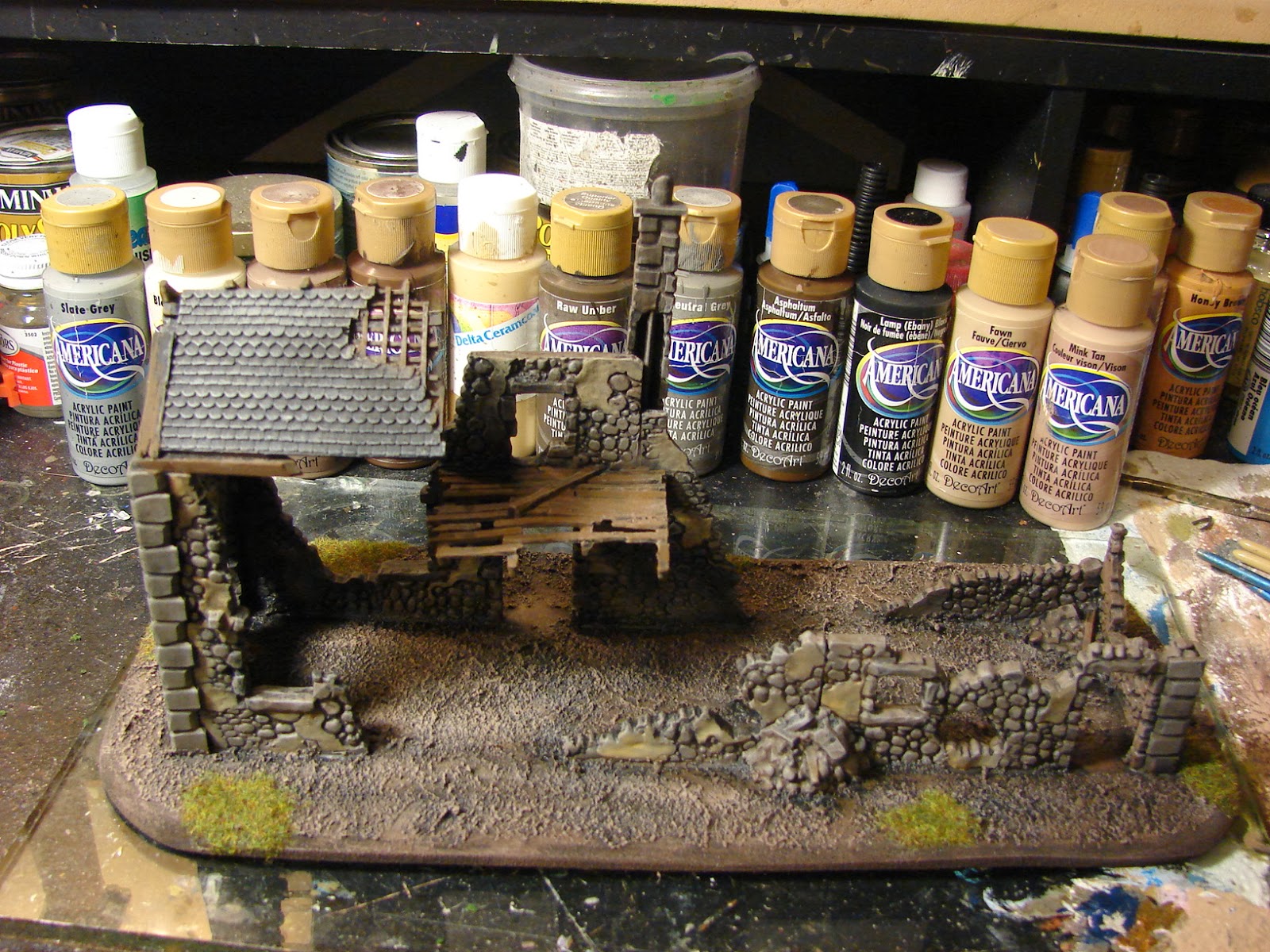 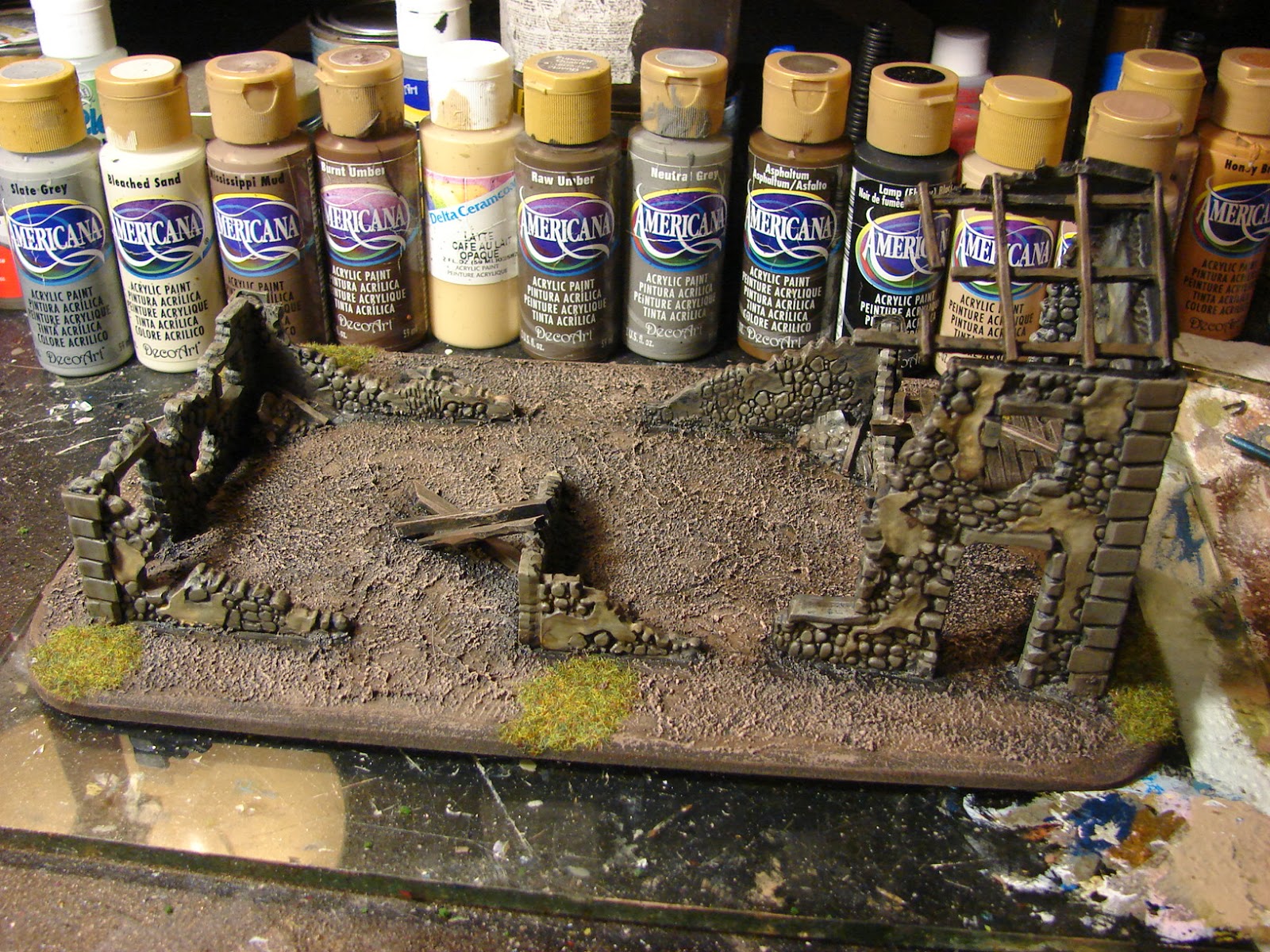 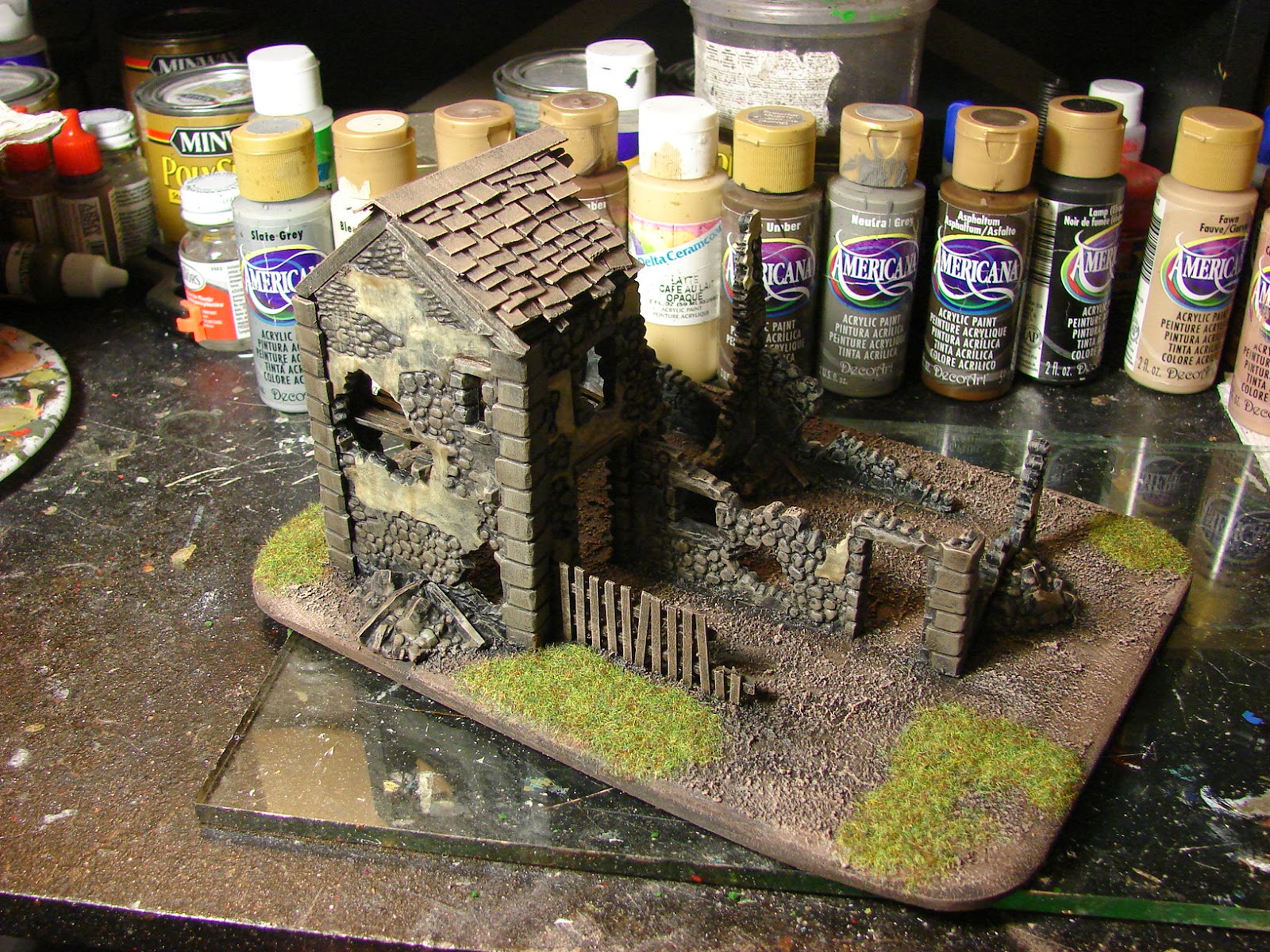 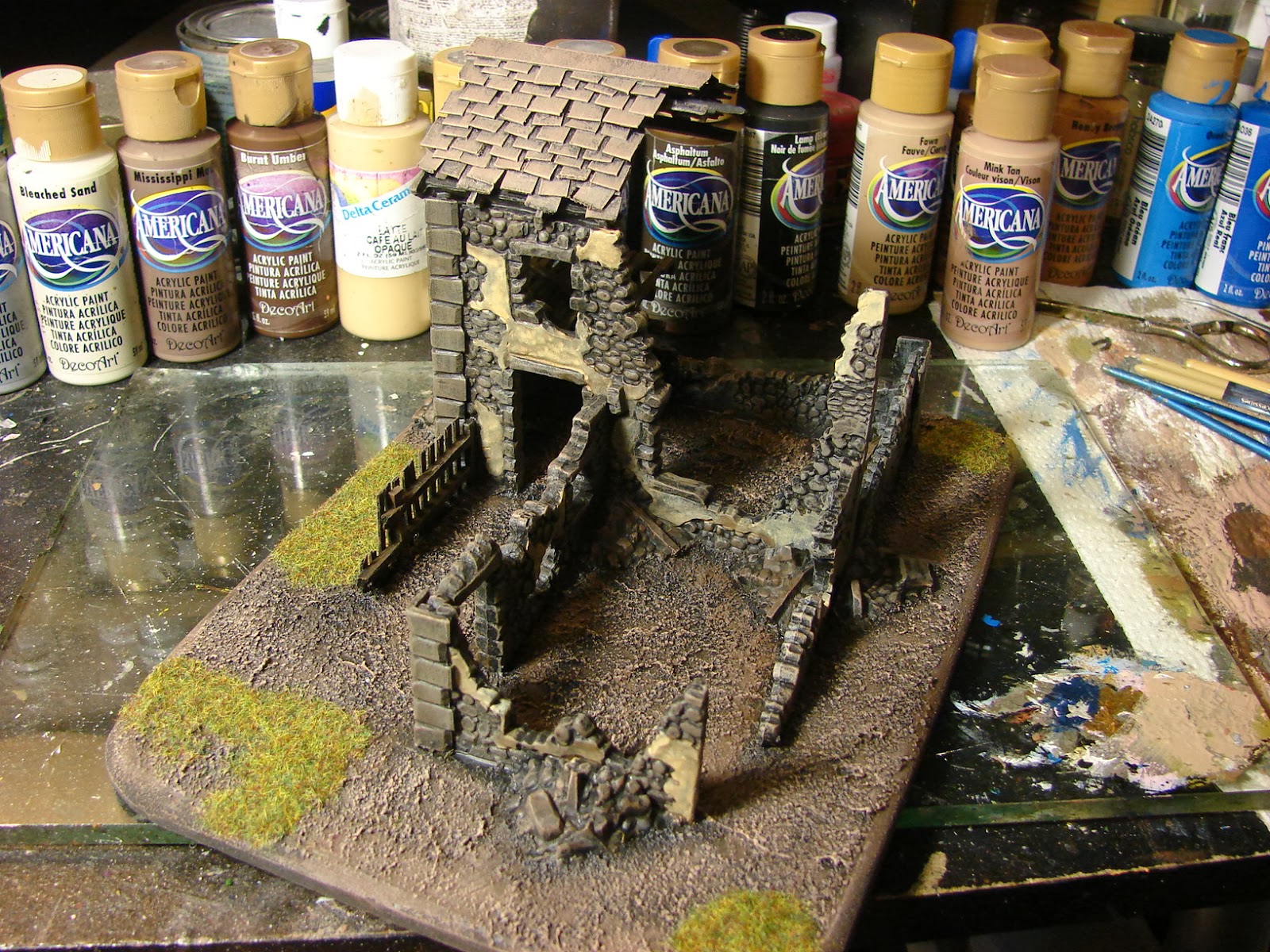 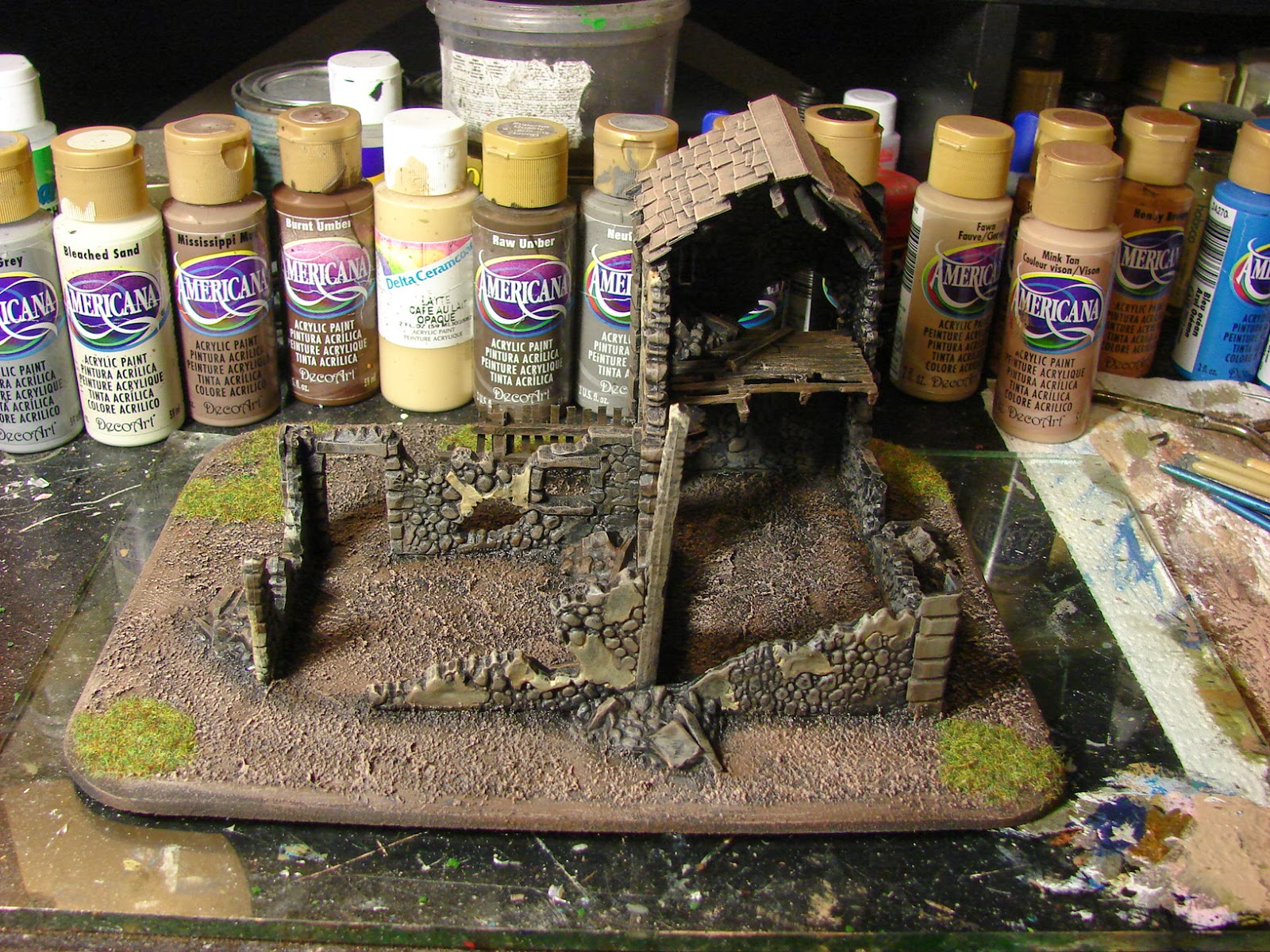 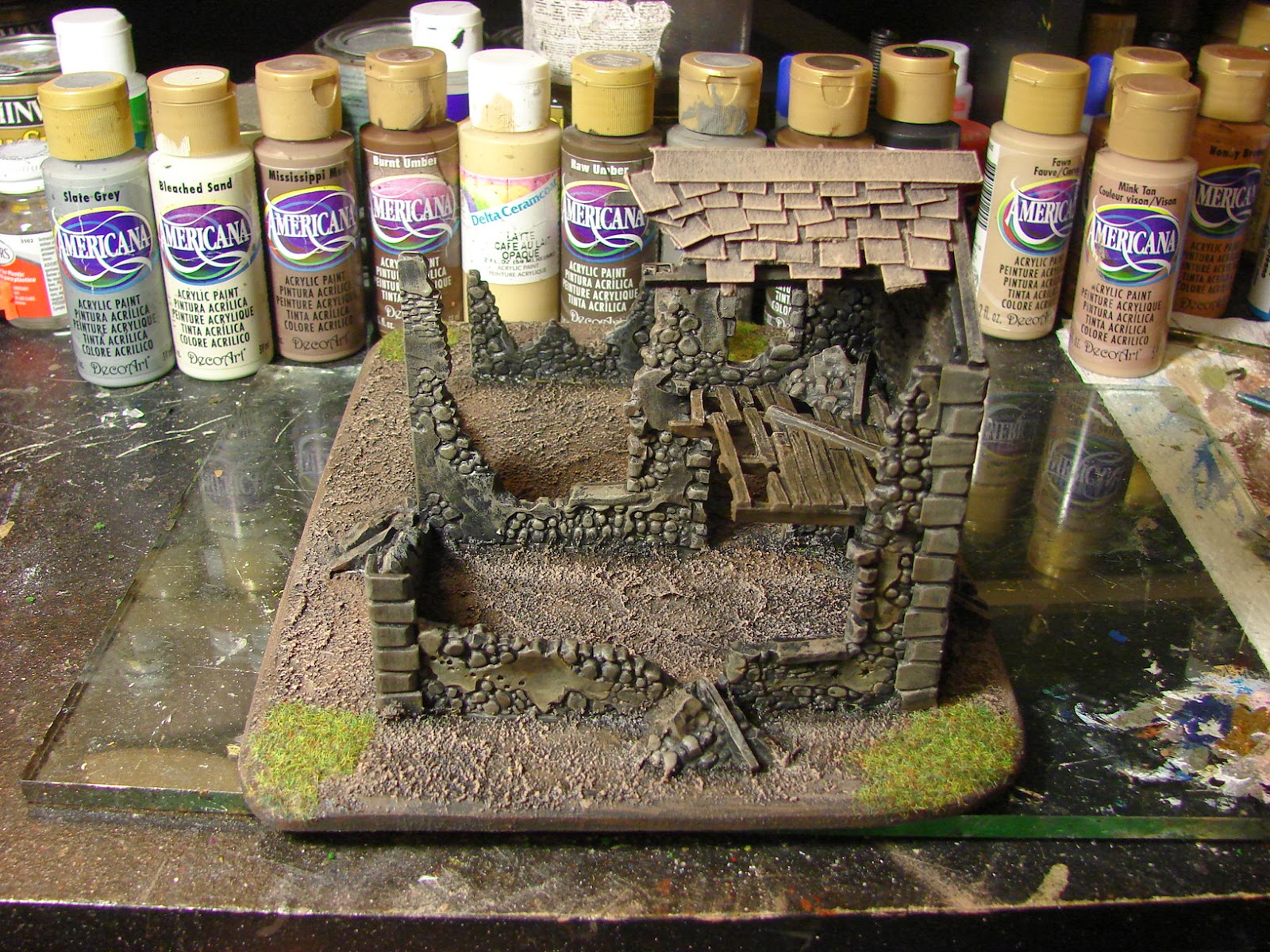 Well besides the ruins, I got another Pulp Miniature completed this week, it is Doctor Mathis from the University. Once again, this figure was a blast to paint up and had just the right amount of detail. 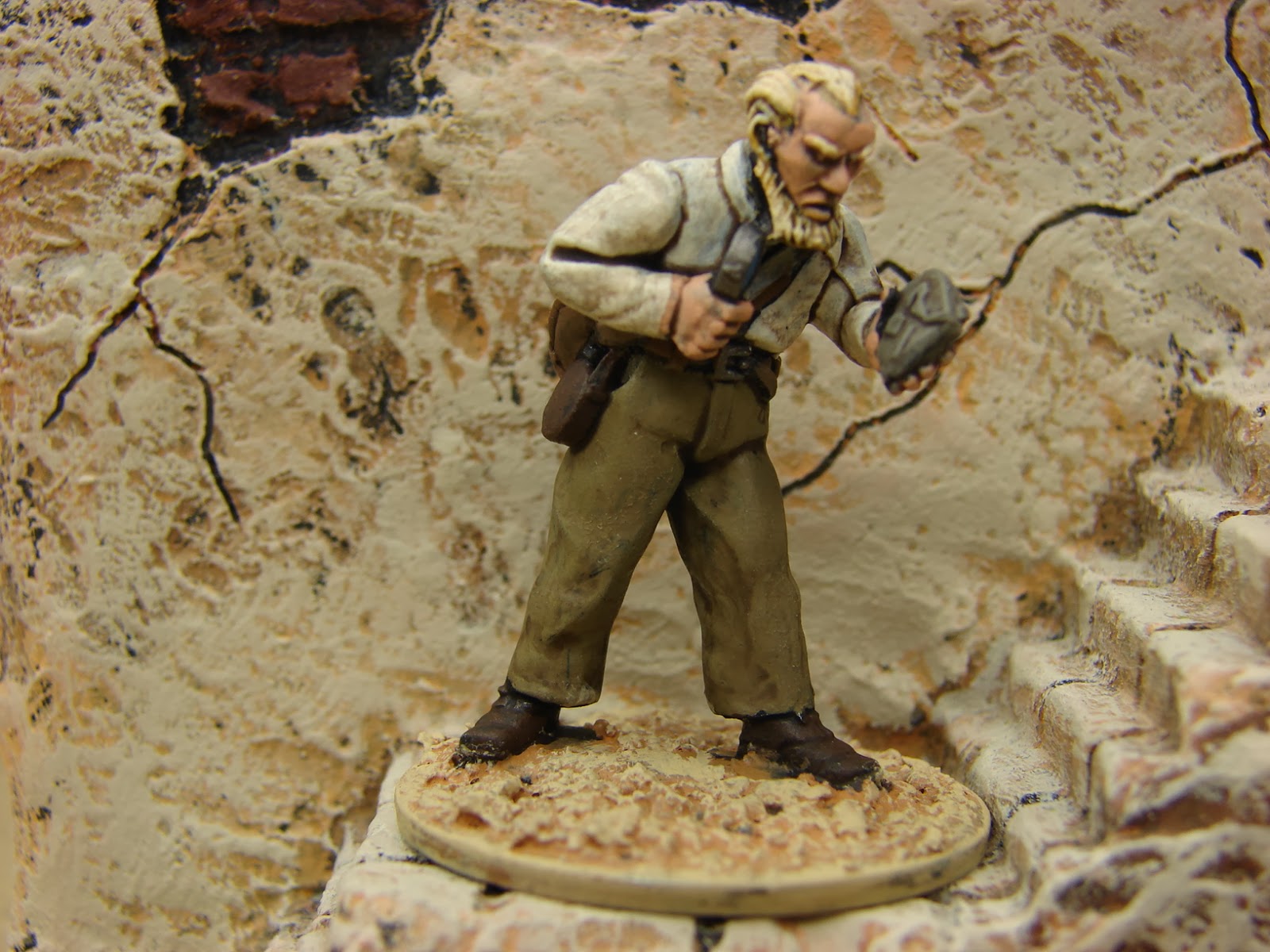 So there you go folks, another week down and another post. I will be doing a write up of the Flames of War event I attended this past weekend, so once I get all my thoughts down I will get it posted here, so stay tuned...

That's right folks, I have another figure completed and its another Pulp Miniature. Today we have Steven Tubner, a good fried of Chappie and a railroad mogul that fancies himself a archaeologist when not building rail empires. 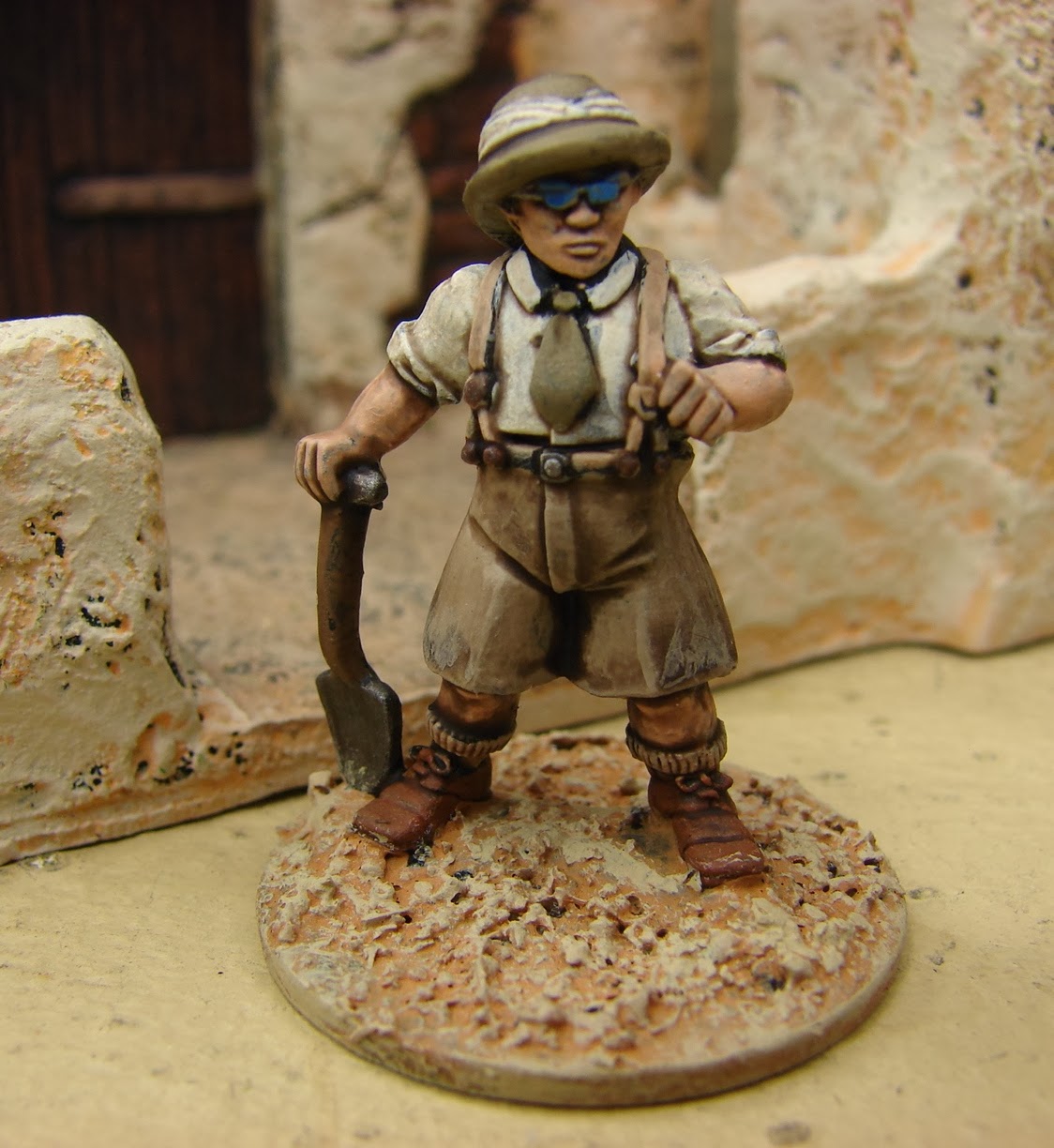 As with the last figure, this one is inspired after another friend of mine from Disneyland (I'm starting to see a trend here!). Steven used to work with Don and I on the Mark Twain. Steven was also a model railroader and the three of us would talk model railroading all day long.

Anyway, another figure down and another one is on the way.

So I forgot to post an idea that I was going to try for the new year, so I thought why not let folks in on it. As I have mentioned in previous posts, I love the Pulp theme/era and I am going to try to do a post once a week about something Pulp related. So that might be thoughts of games played, inspiration ideas, terrain projects, figures painted or whatever my Pulpy brain can think of. So I declare that Wednesdays will now be known here as "Pulpdays". Hopefully folks will enjoy it, I still plan to post about other projects so don't run away in terror just yet.

So to get this Pulpdays started, I have decided that for the next few months I will paint one Pulp figure I own. This should be inspiration for me to get Pulp Alley on the table and it will help with getting my backlog of figures painted. So without further ado here is the first of this crazy project I am about to undertake!

Now as I said in October of last year, my wife purchased six packs of the Pulp Miniatures for my birthday. Since I wanted to paint all of them, I did a very scientific method of picking the first model, I closed my eyes and reached into the box and grabbed the first one. Whichever figure I grabbed would dictate which pact that I would paint up over the next five weeks. Well the winner was pack# PHP14 Rugged Archaeologists!

The lucky figure was the second one from the left, which his name will be Professor Chapman who is named after a friend of mine I used to work with back on the Jungle Cruise at Disneyland. This figure looks like my old friend Chappie and I could see him standing on the dock telling me to "Move it up skip" (a Disneyland term to move our Jungle Boats up to the load position). So here is the finished product!

Total paint  time on this figure was about three hours and was very nice and easy to paint. I really like how the figure turned out and had a lot of fun to painting it up. I highly recommend Pulp Miniatures, they have very little flash or mold lines and are very characterful.

So there you go, my first installment of Pulpdays, there will be more to come...

All Is Quiet On New Years Day 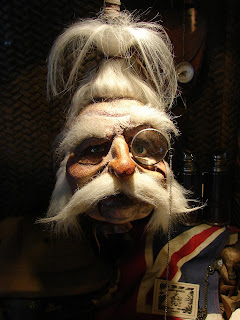 The first post of 2014 and as the title mentions, it is all quiet here at SPL (aka my game room). In years past I have always had folks over for gaming on New Years day, but not this year since it falls in the middle of the week. So I guess I should lay out my plans for gaming and modeling this year, these are not in any particular order, so here goes.

X-Wing - So I got a pretty good haul of stuff this Christmas and Robert and I have talked about getting this game onto the table. Being old enough to remember when I saw Star Wars in the Movie theater during its first release, I always wanted to do some sort of miniature gaming with Tie Fighters and X-Wings. So now after many many moons, that will happen. In fact, Robert and I got in 4 games of it on New Years Eve and we had a blast. Sadly my record of Win/Loss was a 1 -3, but this will change as I read up on the rules and play more games.

Flames of War- Well this is one game I will be returning to in a big way. It was the most played game for me in 2013 and 2012 and I do not see that changing for 2014! In fact I am getting excited about doing another campaign with Robert and a few others. We are looking at an Operation Market Garden or Operation Overlord. So that means I will be building a few more armies for FoW. I will also be playing in Shifting Sands 2014 in a few weeks and I want to play in more local tournaments. I played in one tournament in 2012 and 2013, this year I want to play in more than one. I am also thinking of running my own FoW event in 2014, but we will see how that one goes.

Pulp Alley - I love these rules and I love anything "Pulpy". Last year I ran a group game for some friends using the LotR rules, it worked but still did not feel right. I think Pulp Alley has everything I want in a rule set. So my goal is to run not one, but at least four Pulp Alley games. So I have some painting to do as well as planning in order to get in more games of this. Nice thing is that I will be taking a demo game of Pulp Alley to Adepticon in April, so I hope to hook a bunch more folks into playing it.

Legends of the Old West - Like last year, I want to get this game back to the table. Nice thing is that I am playing in a small tournament of LotOW at Adepticon this year. I recently got about a dozen Gorgon Studios old west figures that I plan to get painted up for the event, as well as do a review of them. With doing Old West, I want to finely get more of my old west building painted so I can play said game. Last year I sold my buildings to the local game store hoping that would get me to paint up what I have, but all it did was keep it on the back burner. So I hope to be doing some old west gaming in 2014.

Bolt Action - Well I am running a Bolt Action tournament in about a month and a half, so I will be working on terrain and figures throughout 2014. I don't see any new armies in the future, just painting up what I have and playing some more games.

Empire of the Dead - Well I want to get at least two factions completed for the game so I can demo the game for folks. I only got in a few games with my buddy Dave but I am sure more folks would get interested in it if they saw it out on the table. So I plan to get out and play more of this in the local shops.

Saga - Well, I played one game of this last year, liked it, but did nothing else with it, so I want to get in at least two games of this. My WAB Viking army is wanting to get out of their storage box and I can use figures from that for Saga.

Adepticon - Well I am going back to Chicago for this awesome game event, I will be running a Bolt Action tournament, playing in the LotOW tournament, helping my buddy run a Legends of the High Seas event as well as play in a few Gladiator games using the LotR rules. I will also be playing in a the Sons of April game this year since it is using the LotHS rules.  I also plan to do my usual blog coverage of this event and I am looking forward to seeing some old friends. John & Jamie owe me a dinner!

Gathering in the Desert - Well as I mentioned, GitD is back on and this year it is Warlords Bolt Action. I want this event to stand out over the other Bolt Action events with the way it runs and looks. So I have my work cut out for me in the next month.

Black Powder - Well we are all planning on doing some Nappy games for BP and I want to get at least a brigade of French ready for the game. I also want to get my Confederate Brigade completed. Some tall orders since I have nothing painted or even assembled yet. But BP is a cool group game and I love playing it with folks.

So there you go folks, this years plan, I hope to due better than last year. My biggest goal is to stay focused on these goals and do not let myself get distracted. So it will be interesting to see just how well I do this year. Good Luck to me, because I will need it!