Build it and they will come...

Well we are now under way with 2012 and for this update I wanted to show off some new buildings that I recently picked up for Gathering in the Desert and other projects.

The name of this awesome company is Game Craft Miniatures and they do terrain from as small as 6mm all the way up to 28mm. Mike over at Da Green Skins pointed me to these guys. Well after looking through their online store, I decided to pick up two kits for GitD for my Harad table. They offer middle eastern buildings that have that Harad look to them and they can also stand in for Pulp games or anything else. I also picked up the Gallows for some Legends of the Old West/High Seas gaming. All of these kits that I purchased were made out of MDF and cut with a laser.

It took about a week for my order to get to me and this is what I got below (all three kits). 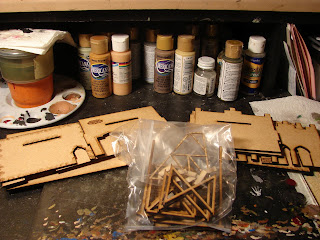 First up is kit #28mmdf012 Middle East One Story Building. 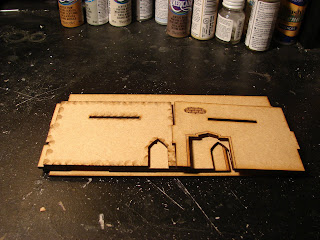 Here it is all laid out, pretty simple. 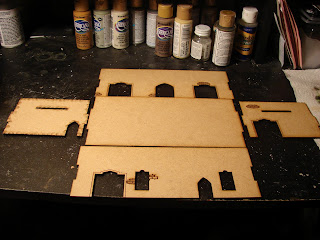 Here is the building test fit together, total time to assemble, less than a minute! Nice thing I like about this one is the window and door openings, they have that Middle east feel to them, which once again is perfect for Harad. 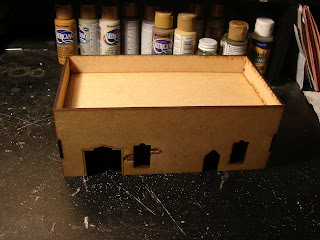 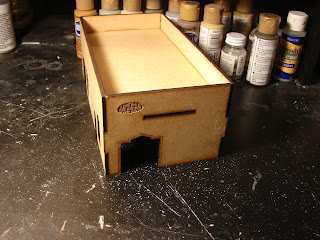 Here is a 28mm figure to give you scale. 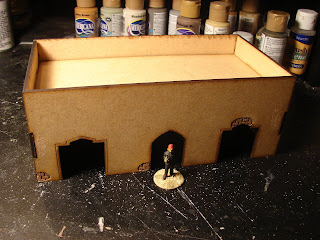 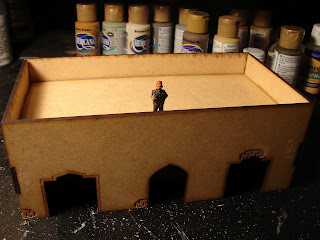 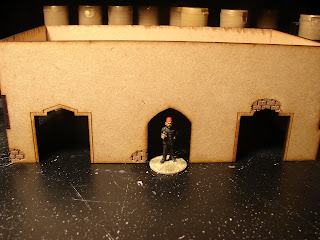 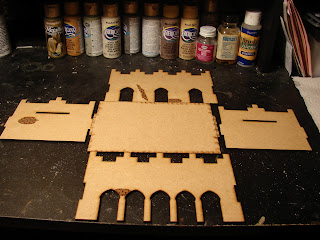 This one went together in the same time frame, less than a minute! 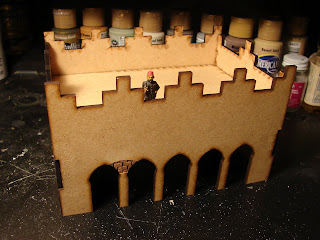 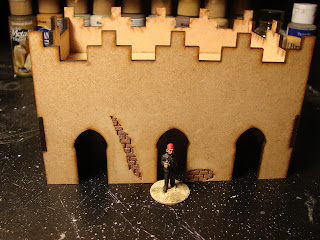 One other thing that I like is the brick effect that is laser cut into some of the spots on the building, here is a close up shot. 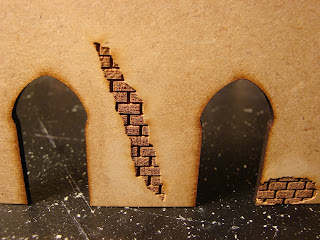 The last kit #28mwest014 took a bit more time to assemble as seen by the parts below. 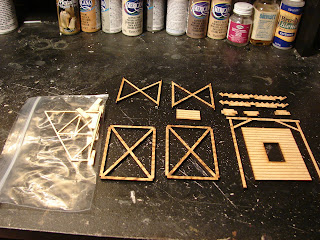 One thing I did to change my kit up, was to install wood slates on the sides of the stairs. I did this for two reasons, one it would make the stairs a bit for sturdy and two, I broke some of the railing while assembling it. I always like to do some sort of modifications so it works for me. 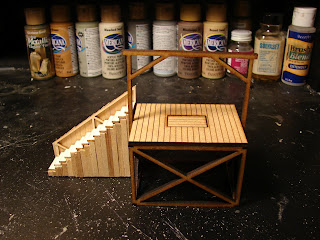 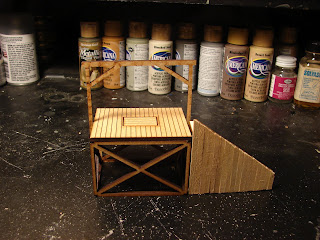 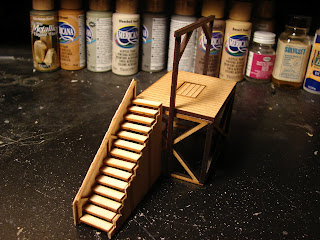 Here are a few figures for scale, now all I need to do is make up a nice noose (that has the proper number of wraps) for it. 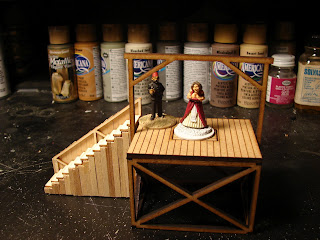 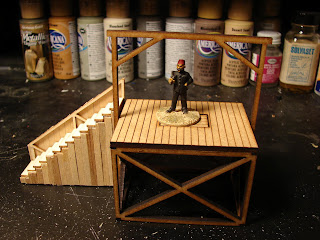 So there you go, a couple of new buildings and a nice Gallows. I really love these kits, they are sturdy, look good and are pretty cheap. All three kits cost $32.35 plus shipping. I will be doing some work on the Middle Eastern buildings tomorrow and will post up what I got done. so stay tuned...
TK
Posted by Tim Kulinski at 11:58 AM 4 comments:

We are now on the third of January and I have beaten to the punch by my fellow local gamers/bloggers, Oh well.

Anyhow, as my good friend Drunkensamurai pointed out to me the other day, my last blog post really did not say what my plans on the gaming front will be in 2012. As he put it, I was very vague in my post, so I thought I would go more in depth on this post. No surprise most of the things that Drunkensamurai mentioned in his post are going to be on my list, but with a twist. So here we go...

Well, as Drunken mentioned, terrain will be a major focus this year. When I game, I want the table to have a Wow Factor to it. My obsession with nice terrain started many moons ago when I was big into Model Railroading and Military Modeling. I have also been inspired by many fellow gamers on the Lead Adventure Forum (LAF). Well I want to do some cool looking terrain for a couple of projects, WW2, Old West and a Caribbean town for Pirates. So stay tuned for more, but it looks like Drunken and I will be working on the WW2 stuff pretty soon.

Well, I did cover this in my last post, but as of last night, thanks to my son, I had an interesting proposition thrown out to me. My son who is 22 (and home from college) said it would be cool to play Bang (a Old west card game) using miniatures. Well he and I talked and I brought up Legends of the Old West. Well my sons favorite game was Mordheim and he expressed interest in LotOW.

Also I saw that Drunken had mentioned that he was a little bummed that some of the guys moved on from LotOW. A good friend used to host a LotOW campaign day at his house where we would get together and play a few linked games. Well I think I will pick up the gauntlet and host a Legends of the Old West Campaign here at the old SPL.

Also I will be waiting to see what Warlord Games puts out for WW2 rules. I am hopeful that these will be a good set of rules that I can jump behind. I will also be trying a few other rule sets. We will see what the future holds.

One last thing, I did host a few games on New Year's Day, had a few guys over to play Blood Bowl (2 had never played it) . Everyone had a good time and I busted out the BBQ and we all did lunch together. Have to say, to me that's what gaming is all about, a good game, good food and a good friends rolling dice! I have to say that this was a great way to start off the new year!