Bring on the Night!

As I mentioned last post, I had just got back from a vacation trip to CA with the wife and the Brightwell's. One thing we all did together was head up to Universal Studios Hollywood which we put in a 12 hour day and watch some folks get motion sick (I shall not mention the name of the effected party member so as not to embarrass him). Anyways one of the attractions that we did (except for my wife the scared cat) was the Universal House of Horrors walk thru attraction. 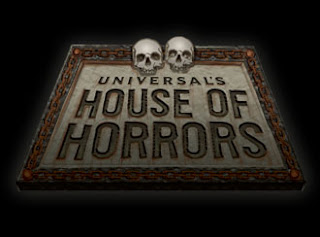 So as the name implies, this is your basic haunted house sort of walk thru, but the cool thing is that Universal has populated it with some of there classic horror creatures like Dracula, the Mummy, Frankenstein and the Wolf man as well as a few others. (Like Chucky who scared Robs wife so bad the cast member who was playing Chucky,  fell back laughing and Rob and I were busting up as well!).

Well Universal did an outstanding job on the sets inside and I was impressed and inspired at the same time. This got me to thinking of my Empire of the Dead collection back home and I needed to throw some paint on a few models. 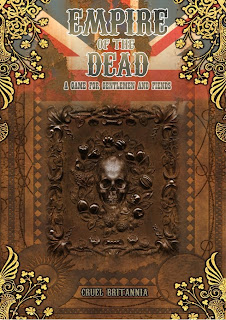 So this week while working on a commission for Saguaro Painting Service customer, I painted up a few models for myself. So here are my efforts from this week. First up are a few of my Lycaon group that I am building.

Now, you may notice that these are not the official EotD figures, but they are from the West Wind Gothic Horror line. Before EotD was announced, I purchased these figures just because they looked cool and I was going to use them for some Pulp games (which will still happen!).

So first up are two of the Great Wolves that are in the Gothic Horror line. I went for a grey scheme and you can not see it, but they both have a black strip running down their backs. These guys are pretty huge, they are close to the old GW wolves that were out a few years ago.

Now for my Beastlord, I used the West wind Loup Garou figure which is massive! I had to bend his legs to get him to fit onto the base. I really like how he looks and he feels right for the Beastlord, which is the leader for the Lycaon  faction.

I also painted up this pack of West wind Wolf men, which once again is from the Gothic Horror line. I use the guy with his head back howling as my Pack master. These figures were fun to paint up and look nice on the table.

The last model I decided to paint up is my Graf for the Nosferatu faction. This figure comes out of the Nosferatu #2 pack from West wind. I like the classic look of the Nosferatu vampires, heck, the Nosferatu movie from 1922 still creeps me out, maybe because its black and white, not sure. So when I saw this figure in the EotD book, I had to have him for my Graf.

So there you go, some inspiration from a vacation trip with friends. There will be more EotD models coming soon as well as some terrain that I have been working on. I may be taking this game to Adepticon in 2014 as a multi-player game, I will know more about that next week.

Just got back from our annual 4th of July trip with the Brightwell Family and one of the highlights of the trip (which there were many) was the shopping day that Rob and I did to the War House and Brookhurst Hobbies. Both stores are infamous in the Southern California gaming community and were two stores that I frequented while I lived there. Every time I am in So Cal I try to stop by at least one of these stores.


First up is this Osprey hard back book, now this was not a find, I am just borrowing it to read from Rob. Since there is plans for a Shifting Sands event for Kursk, this was a must read and is a very good book.

Now the first purchase was this duel book set that I found. Rob recently picked these books up but separately and since I had not seen these here in Phoenix, I picked them up.

Now, here was the first thing on my list I was looking for, a few Zeveda Panzer II's for my early war list. Now I was only looking for 3 of these kits which I picked up, but on Friday night, Rob and I made a late night run for me to pick up the other two kits. This would give me a full platoon if I ever needed it and at $3.98 a kit, how could I not buy all of them?

Next up is two boxes of StuG F8/G from Plastic Soldier Company for the list I am working on for the SS2014 event. I plan on running a StuG list since they were there at Kursk. So I picked up two kits for $30.98 each.

My next find were a set of British Desert decals for the 8th army tank force I am building. It seems that decals are tough to get and find for FoW items. So when I found these, they went into the basket!

Next was this lone Honey Stuart, I have a box set of these guys with only 5 vehicles, but now with the 6th one I can run two 3 tanks platoons.

Now I had to dig for these guys, two quad AA guns for my StuG list. Good thing I wrote down the code number, because I had to dig through all of the blisters to find these guys.

This one was another surprise find, a German recovery vehicle which you can only get from mail order. Rob found this and suggested I pick it up, good find Rob.

Last thing up is the new P-38 kit that just released. Since I have a Mid War American army for the desert, this will be a perfect fit for the army. Plus I just love this plane and had to have it.

So there you go, my little haul from this past week. Now I did see the Dreadball game and all the teams as well as more Call to Arms Star Trek stuff, but I can get those at my local store. All in all I did pretty good and the power of positive thinking paid off. So stay tuned for some building updates...