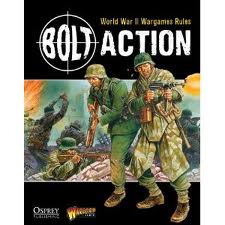 Last Friday, I picked up my copy of Bolt Action from Warlord games from my local store. I have been waiting for this book for some time now and I am glad that it is now out. You see I have a pretty good collection of WW2 figures and over the years have played many of the WW2 rule sets that are out there. The problem was nothing ever seemed to be "just right" for me. So when I heard that Warlord was working on this, I had hopes for the game.

Well after looking through the book and getting to watch the game in progress last Friday night, I have to say this game is what I was looking for. It is a pretty simple system that gets results and I think that Warlord has another winner on their hands. So I am pretty excited about this game and the chance to bust out my 28mm collections again. (So look for pics coming soon of my collections).

There is another reason I am glad this game is out and it ties into GW's 40K. You see I have been wondering if I wanted to jump into 40K 6th edition. I have a huge Sister of Battle army and a growing collection of Orks that are waiting in the wings. I had toyed with dropping the cash for the new 40K rulebook, but the $75.00 price has kept me at bay since a Sisters codex is a long way off as well as an Ork codex. And this week GW announced the new Chaos codex at a staggering $50.00 for the book had got me rethinking 40K. I am not sure about dropping that much cash on a book that will only be good until the next edition comes out. So when Bolt Action came out at $35.00, I was all over that! So it looks like my Sisters and Orks will sit for a while longer and the WW2 collection (that has been sitting for years) will be coming out.

So anyway, look for more 28mm WW2 action here on the old blog in the very near future. In fact I can see FoW possibly cooling down for me since it has only been a fill in for my 28m obsession. So as I said above, I am really excited about Bolt Action!

Next weekend my local shop is holding a Early War Flames of War Tournament and somehow I was talked into playing! Now, Early war is not too popular out here in Phoenix, it seems that most players here are more interested in Late war FoW games. Personally, I prefer Early War since you do not see all the big Cats (Tigers, Panthers) and all the other big armor that the end of the war was famous for. There is something about light tanks that is just more appealing to me.

So with being talked into playing I had to decide what to take, I could take a DAK army and that would only mean having to change out a few units and vehicles. But when I think early war, I think of the fall of France and Poland. Also I just love the early war German tanks (well most German tanks really!). Now some intrepid readers will recall, at the beginning of the year I bought a ton (well more like 7 packs) of Old Glory 38t's. I have always wanted to build a Czech platoon tank list envisioning Rommel leading his 7th Panzer "Ghost Division" across France. So it seemed that I had the models and I just need to get them painted up.

So now the next thing was to build a list, I am not a huge tourney player and I tend to build armies around a historical theme. This leads to a problem since most historical builds for FoW just do not behave like there real counterparts. But I wanted to do the 7th Panzer and I wanted a lot of tanks. So thanks to my buddy Robert pointing me to this awesome blog FOW Lists which allowed me to quickly build a list. 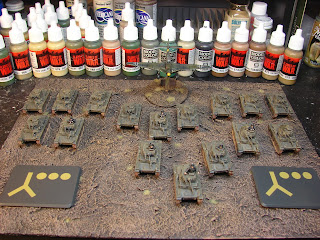 So here is the army above and the list I will be taking below:

So you may notice that this is 16 tanks, all 38t's and Air Support. Will the army do well, I do not know, but I will sure have a blast playing it. It also fits with Rommel's "Ghost Division" with Rommel being so far away from his other support as he raced across France, with only air support being able to help.

So next up was building and painting, I wanted to get the Battlefront Rommel 38t model, but two things held me back, first up, the BF 38t would be a bit larger than the Old Glory model. Secondly I could not find the model anywhere here in the Valley of the Sun. So I improvised and use a Plastic Soldier tank Commander to represent Rommel. Now in fact the only Battle Front items in this army are two German Tank Commander heads I used for my Company Commander and the 2IC, all the rest of the items are non Battlefront models. This event is not using the crazy "Have to use 50% BF Models" ruling that BF came out with a few months ago and even if I win this event (yeah right!), I would not go to a BF National anyway. 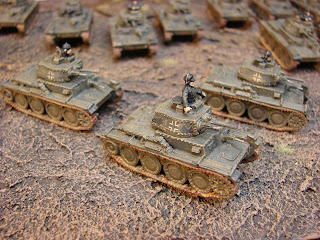 You may also notice that I did some extra weathering on these models, I wanted them to look like they were out in the field and actually being used. One thing that bugs me is that many modelers paint up there vehicles so that they looked like they just rolled off the assembly floor. Tanks get dirty, so I weathered them up! 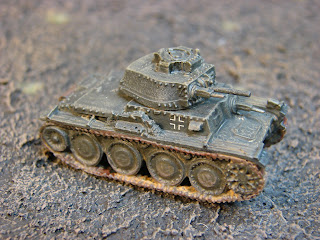 My Stuka is actually from Dragon Models and came pre-painted and all I had to do was mount it on a flying base. Even the flying base is not BF, I used an old GW flying stand and some plastic sheeting to make one that looks like the BF one. 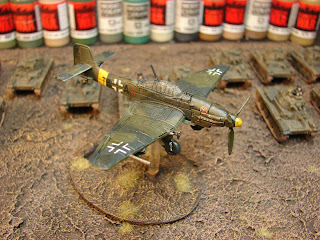 The last thing I needed was some Objective markers. Now I have heard that BF released some large bases with National markings on them. Well I never bought any of those so I decided to do my own using their idea. Well to tie the army all together I decided that I wanted to use the 7th Panzer symbol which was easy to find on the old Internet. But how would I go about this?

Well I was watching a re-run of American Choppers and I noticed how some of the motorcycle painters use plotters and vinyl to mask their designs. So I made a call to a buddy of mine and asked him to cut out the 7th Panzer symbol and I would do the rest. So first I painted a standard Large base with German Yellow from Army Painter. Once dry I applied the vinyl and made sure it was seated down (so it would not bleed under) and then sprayed German Grey from Army Painter over it. I let that dry and them peeled off the vinyl leaving the symbol below in yellow. pretty simple really and I was really excited about it. (I know, I am a dork!) 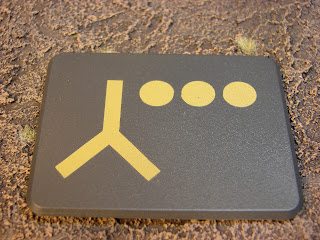 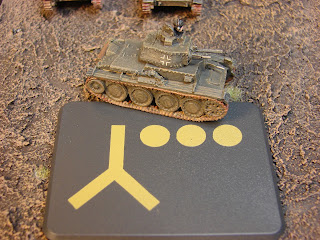 So there you go, one 1625 Czech Army either ready to dominate the battlefield or to be dominated! 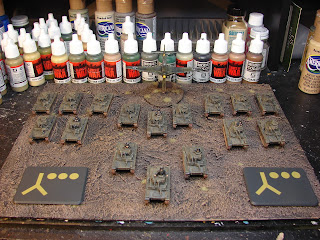 I will post up some after action reports and my personal thoughts on how I did and how my first FoW tourney experience was. If your in the Phoenix area next weekend, stop by Imperial Outpost games to see how the army is doing in person. Wish me luck, Panzers roll out!