Way back in in August of 2010, I started my second Flames of War army, a US Armored Company. I took the plunge and purchased a ton of Old Glory Command Decision vehicles. Recently I picked up two boxes of the Plastic Soldier Sherman Tank kits.

For those who have not bought these awesome kits, I highly recommend them and the cost is perfect! (5 tanks for $30.00!) I got the M4A2 kit and M4A1 kits. 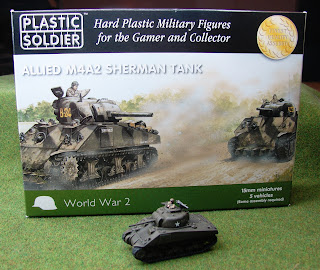 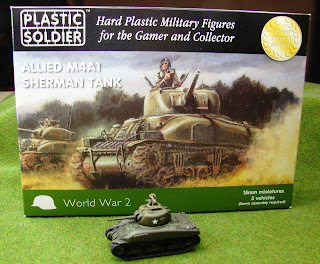 Once again these kits are perfect for building a quick force for very little money. While at my local shop I took a look at the price of the FoW tanks and I almost fell over, Plastic Soldier company will be getting a lot more money from me with there kits.

Now onto the US force I have been working on for about a year now. Now I approached building this force I went with a historical bent. You see when I first started this force I was reading a great book called Army at Dawn, which is about the US involvement in North Africa in WW2. There is a great part in the book that talks about how when the US force landed in North Africa they could not get the Sherman tanks out of the hold of the transport ships. The only tanks that hit the African coast first were light tanks.

So I decided to do M3A1 Stuarts as the main back bone of the army. So here is two Combat platoons of 5 M3A1's and the HQ with two Stuarts as well. These are all from Old Glory and are great little models with a lot of character. 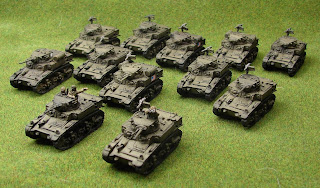 To give the force some punch, I added in 5 M3 Lees with the shorter 75mm guns. These are from Old Glory as well.

Now we have the Sherman tanks from Plastic Soldier and will only be added at a later date to the list. These models are the M4A1 kits.

Here are the other Plastic Soldier kits, the M4A2 kits which like the other Sherman tanks will be added later. 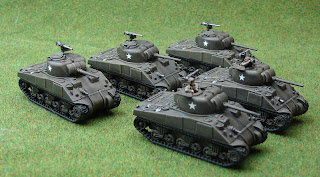 Next up is my artillery command, Forward Observers and Staff teams. All the models are from Old Glory.

For my artillery I went with T19's which are going to be tough to play in the game do to the Awkward layout, meaning they can only move or shoot. So while they will be tough to play, it makes the force very historical. Once again these are from Old Glory as well.

Last up is some Anti-tank platoons, these are M3 75mm GMC half tracks. This unit is not done yet because I still have to finish painting 3 jeeps and the command stands for the unit. These are also from Old Glory.

Now this past weekend I got to get this force out onto the table against Robs Fallshirmjagers
that he is working on. Well I would like to say the US won, but it was a draw, which is not bad and is not a loss. Playing a all tank army for FoW is going to be tough and it is very different from a combined arms army. I am happy with how it is looking and is nice to learn how to play some different.