So the other night I felt like working on some Blood Bowl figures, but most of them have already been painted & need to be stripped. So while looking in my game closet, I spied my Tomb Kings Box setting there. Something was calling me to the box and when I opened it up I found all the sprues that I had not assembled yet. So I thought I would do up a Khemeri team since I have a ton of the Tomb Kings.


So I set about building a Khemeri team and when I finished the last figure, I had twenty of these guys sitting in front of me, that was Monday night. So when Tuesday morning came around, I decided to prime up the figures while on a break from searching for a job. Once the primer went on, I started seeing the color scheme I would use, Gold and a Light Blue. So after Lunch, I painted up one guy and then dipped him in a different Polyshade color that I am used to using, I dipped him with Antique Walnut, which is a brown color. Later that day I went out to check on the color and fell in love with the way it came out. So when the wife & I got home from hanging out with friends last night, I painted up the rest of the team.

So here is my Khemeri Team (Which Still needs a name, so leave me a comment on a team name) First up are the Thro-Ras (Throwers). The balls they are holding are made out of Green Stuff. 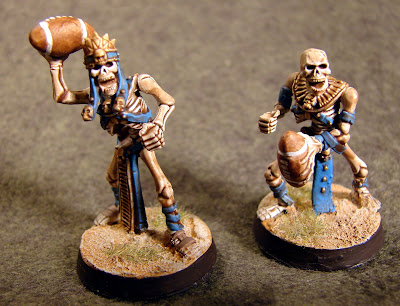 Here we have two Blitz-Ras (Blitzers) and for those following at home, the armour on the shoulders & thighs are from the Old Skeleton box set. I don't throw any bits away! 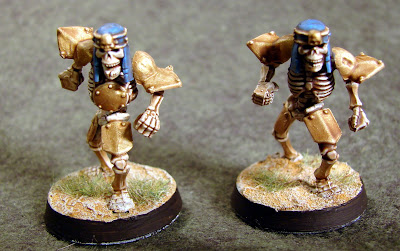 Here is the bulk of the team, just plain old Skeletons, I did do a few conversions which make a few look like they are running (See the Skeleton on the far right front).

And here is the whole team together, the only thing I am missing is a few Mummies which I plan on doing some converting using Old school Mummies that GW used to make. 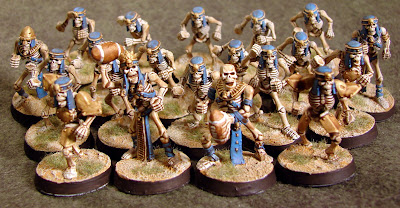 This little side project was great to do something different and creative. I only wish a few of my other buddies would get interested in Blood Bowl!..
TK
Posted by Tim Kulinski at 1:02 PM

Great looking stuff Tim...as always. For me to get interested I'd have to play first! (nope...never played a game of Blood Bowl). As for a team name...how about the Ra-Ras? or Ra-ders (though you should have done black and silver for them in that case).

Those are awesome. I am jealous!

Excellent stuff Tim - good to hear you're getting into BB.

At my club, it used to be that we had people play Blood Bowl very sporadically. You'd get a couple of people play it one week - then a month later some others might turn up with a board and have a game. The best thing about Blood Bowl is playing league games and seeing your team develop - so I thought I'd get things going by setting up a league...

I started off by buying a few BB sets. People who are interested in the game might get a team together but might not want to buy a whole set. I loaned them my boards, dice and rulers and we got some regular games going each week. I also kept track of the league for them and helped them out by printing out rulebooks and rosters.

Over the three years since I started it, the league has developed into having some damn good coaches. We attend the Blood Bowl GT each year as well as many other BB tourneys. I've even set up a website to run the league automatically (www.cbbbl.co.uk)

Keep at it Tim - I'm sure you'll be able to get some regular BB going and it'll be well worth the effort!

@ Everyone, thanks guys for all the comments

@ Tom, Hmm the Ra-Ras sounds like a cheerleading squad, LOL! I like the Ra-ders, but your right I needed to paint them in Black & Silver.

@ Darren, we have a small group of guys that play at a local shop, but I usually have no time to get down to play. Now if I keep posting up BB pics, perhaps my buddies I game with will start playing.

The other thing that drives me nuts is the fact what it cost to buy BB now, for us in the states it's $80.00 for the game. I find it hard to pay that for what you get especially since Space Hulk is now $100.00 and you get more stuff for it!

The boxe isn't cheap, that's for sure. There are some sites where you can print out boards and dugouts though - and if you join the NAF, you can obtain a set of three block dice for $10.

These guys look awesome Tim. I just finished up my Hack Enslash for my Undead blood bowl team yesterday. They definitely need a coat of matt sealer as they are super shiny, but they are practically done.

If I may, I HIGHLY recommend basing the fluff for your team on a real-life football team. It can really tie your team together and give you inspiration for team name, logo, player names & numbers, etc. Check out either of my two teams I have posted on my blog.