First off, We made it back from Colorado okay, no major problems like when we left. Had a great time with friends, enjoyed the weather and had a blast experiencing Colorado. My wife tells me this morning that she wants to move to Parker CO, but unless she has money stored somewhere, it may be a while. But while I was up there I was able to meet up with a few folks in Parker and get in a few games of LotR. You can read about it here: http://www.adeptusmilehigh.com/phpbb/viewtopic.php?f=5&t=37

So with getting back to Arizona, I spent the weekend working on getting my Display board done for Adepticon. I am using a Uruk-hai scout list and themed it after the Uruk's have stolen Merry & Pippin from the books & movies. So while watching the movies before I went to CO, there is a scene in the Two Towers were the Uruks are running through Rohan. It showed them running next to a rock cliff and I thought I would try my hand at making something similar. Now I wanted the whole thing to be split on a diagonal but with 33 models I could not do it. So below are two shots of the completed board. I think it gives you the same feeling from the movie and it is something different than a flat board. 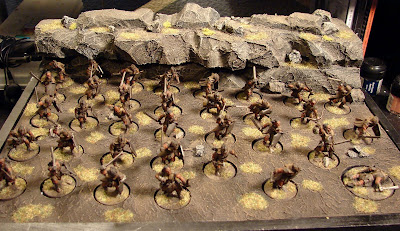 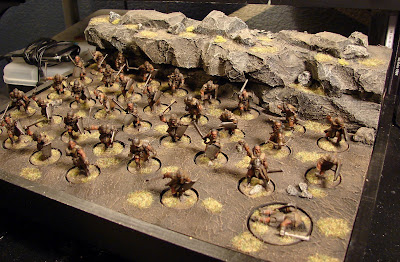 Now I have had a few people ask me about the board locally and thought I would show you what I am using. About a year or so ago I was wandering through my local craft store (Michael's) and saw this unfinished wooden serving tray 10 1/4" x 13 1/2". It was only $3.00 bucks & I decided to get it figuring I could use it for small games & transporting troops. Well I took it home & added a 1/4" piece of Masonite since the troops sat a little to ar inside the tray. I then sprayed it black to seal up the unfinished wood & then coated it with a gloss sealer.

Once this had dried, I cut a piece of Sheet metal to fit inside the tray. I use magnets to store my minis and this would hold them in place once I created the top. In hindsight I should have glued in the sheet metal, but leaving it free actually helps when you flip it over, which I will tell you about later. 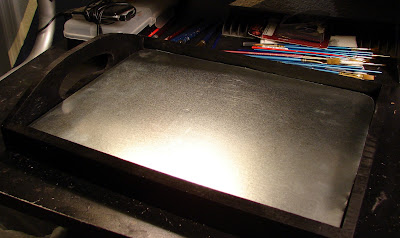 Now I went into the garage & cut out a piece of PVC plastic stock that I have to drop into the tray. I then drew a quick sketch of the rocks and then marked where I would want my figures to go. Once I liked the placement I cut out 33, 1" (25mm) holes for the figures to sit in and one 1 1/4" (40mm) for the casualty figure. After this was done (sorry no pictures of this) I got to gluing down some foam that I cut out. Once that had set I went back and Liquetexed the rocks & the base using Liquetex Stucco. The Liquetex sticks nicely to the plastic and the foam was also glued down with Elmer's wood glue, which too hold well to the PVC. Once everything dried I sprayed it flat black & set about painting it. Here is the finished piece. 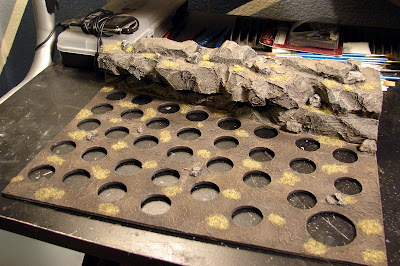 Now all I had to do was drop in the insert and I was done! Here it is with the insert in place. 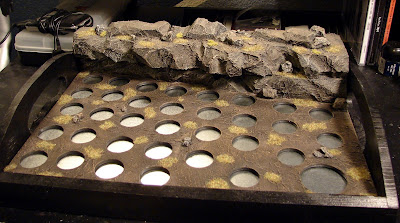 And here it is with the army in it. 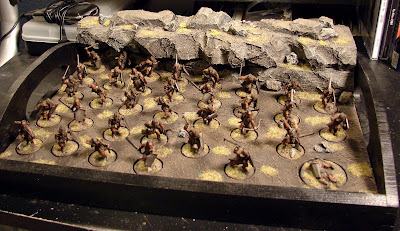 Now in the last two pictures you can see that there are handles to carry the tray with. What I found was that I could flip the whole thing over and put the insert in the other side for a cleaner look. So when the judges come around, I can have a better presentation and when I move the army after games I flip it back. Not bad for a $3.00 investment.
You can see this in person at Adepticon in about a week or so. In fact I think my buddy John of Arizona Wargamer http://azwargamer.blogspot.com/ will have his there as well. In fact there are a few of us here in Phoenix using these things now.
TK
Posted by Tim Kulinski at 5:07 PM

out flipping standing Tim...here's to a best appearance at Adepticon. You make it look easy.

John it is easy, as to me winning best apperance, that's hard! But we will see what we can do.

Anonymous said...
This comment has been removed by a blog administrator.
9:30 PM

Really nice work mate, googled uruk hia scouts and this came up, defo making something like this! Well done