Well, last weekend I busted out a game that I hadn't played with in years last weekend. Let me take you back a few years ago, my brother John & I started playing a little game called Epic Space Marine by Games Workshop. This was when you got 3 armies (Orks, Eldar & Space Marines) in the box with a bunch of cardstock buildings & 1 Space marine Titan and all the rules to play some huge 6mm games of futuristic battles.

Well my Bro & I used to play all the time back in CA, but ever since I moved here to the Valley of the Sunstroke, I havn't even looked at all the Epic stuff I have. Enter Mike G, last weekend. I invite him over for some gaming and he brings his Epic Arrmaegeddon stuff over. So I bust out my stuff and we throw down a game.

Now I have to confess, when GW switched the rules of Epic over to Epic 40K, I lost interest in the game, never liked the way the rules were streamlined. So I lost all interest of wanting to play this game. But GW in the last few years re-wrote the rules to conbine them with the 40K version & the Epic version. So with trepidation I told Mike I would give them a try.

I have to say I'm glad I did, the game works better now than it ever did back in the Epic days. It was alot faster to play and we had a winner after about an hour and a half of play, unlike Epic which would take my Bro & I all day to get a result. All in all I'm generally happy with the way the game now works. In fact, I busted out all my armies again and started looking at repainting some of them. And it looks like I have enough Ork stuff to do an army from scratch using some old school figures.

But there is a problem with this rekindling of an old game, it now makes me want to play more old school games like Space Hulk, Warhammer Quest, and even Blood Bowl. In fact I'm getting together with Mike G on Friday to play some Blood Bowl with the new rules (Mine were from the day of the foam Astrogrant board). I also found a guy at my local shop that wants to play Warhammer Quest, another game that I havn't played in years. Another problem with this new/old gaming is that I have alot of unpainted or partially painted figures for these games that I never finished. So I can see old metal getting bumped ahead of some of my newer models that want to get painted. So bottom line is I have rediscovered some of my Old Classic GW games and will be getting them back into play.

Now something different, a few weeks ago I mentioned that I played a game of Supersystems with Mike G. Well last weekend Mike brought over a few figures that needed paint. I was so excited about painting them, I busted out the brushs after mike left and painted them up, here are so quick pictures of them. First up, a Famous looking Hero that has Claws and who was with a certain X team: 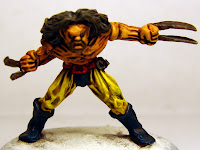 I added the claws from a GW Skaven model that I had, yes he only has 2 claws on each hand, I know he should have 3 but I didn't have any more. Next up is a guy I call Paladin:

Marvel Comics had a character called paladin, but he had a Purple Uniform, this figure reminded me of him but looked better in green rather than purple. Also the Brown overcoat seems to fit the figure. The Next guy reminds me of Tony Stark aka Iron Man, but a bit older:

The last guy is T-Bolt, a figure that Mike said I had to paint up, so here he is:

All in all I really loved these figures & they painted up really fast. I'm hoping Mike give me the chance to paint up a few more...

Oh and to add to my post, in the game against Mike G, he won playing Sapce marines against my Eldar! I guess I'm pretty rusty in playing this game.