I am pretty slow at jumping on the new game band wagon and it has taken me a while to get on this Frostgrave wagon. In fact, I picked up the game and first Nickstarter when it came out and promptly stuck the book on the shelf and miniatures in the closet, until this weekend. 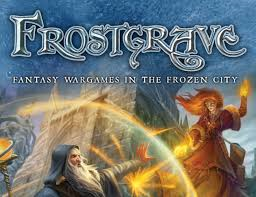 Well what happened this weekend to make me bust it out? Well I hosted a Warhammer Quest game for a few family members and friends and the itch to do some fantasy gaming kicked in. So with that inspiring me, I busted out what  I had and started thinking of what sort of warband I wanted to assemble for the game.

Being an old Warhammer Fantasy Undead player, I knew I wanted to try out a Necromantic Wizard with apprentice. With that decided, I tried to think what sort of people would follow a Necromantic wizard that  pursues death. So the next choice was taking a apprentice which cost me 200gc out of the 500 I had to spend. Then I decided that I needed two Crossbowmen at 50gc, one to hang out with the wizard and one with the apprentice. That meant I had spent 100 gc for the crossbows, 200gc left over. So I went for not one, but two Thief's at 20gc each, there job was to go after treasure quickly and bring it back to the Wizard. After that I choose three thugs as cannon fodder and after all the Wizard doesn't care about life, so cheap troops works to throw away. This took me to 9 models and left me with 100gc left over, so I decided the Wizard would hire a Barbarian to watch over him and protect him while casting.


So with the models figured out, I decided that the back story would be a Necromantic Wizard and apprentice approached a Thieves Guild to offer his services as a wizard to the guild. But the Necromantic wizard only wanted cheap, dispensable lives that he didn't really care about, and who would care if a few thieves disappeared from town. Plus it made getting bodies easier for his necromantic incantations and would allow him to practice raising the dead!

So there you have it, my Necromantic War band for Frostgrave, the wizards motto is Life is Short, But Death, that is Eternal!

I was so tempted yesterday to pick up the rulebook from my new LGS (actually not that local) and they had Wizards marked down to $6. But I decided at the end not too. I keep spreading myself thin and then dont play what I have. Stick to one now for me :)