One of the coolest things I like about going to Adepticon is checking out the terrain and what other folks are doing in the hobby. here are a few shots of terrain that caught my eye while I wandered around the convention.


First up this cool Roman city table from the boys over at Gorgon Studios. It is for the soon to be released Vox Populi skirmish game, Matt Weeks is responsible for this cool table. 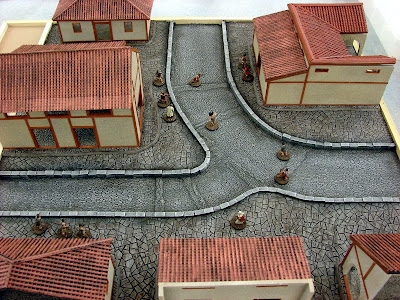 The other thing I was looking forward to seeing was the Flames of War events that made their appearance to Adepticon. With DrunkenSamurai and I getting into Flames of War, I wanted to see the tables. I was not disappointed in what I found at Adepticon for FoW! 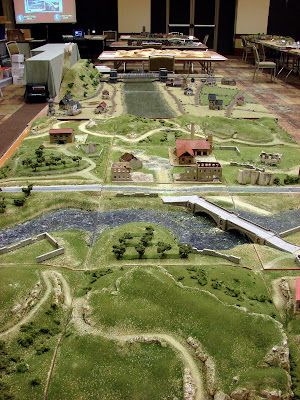 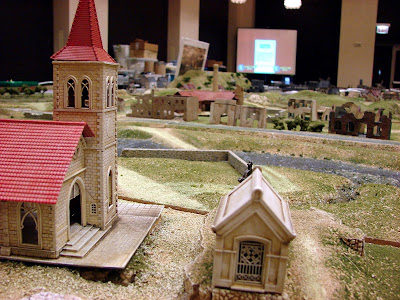 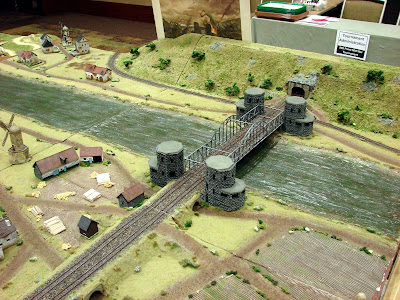 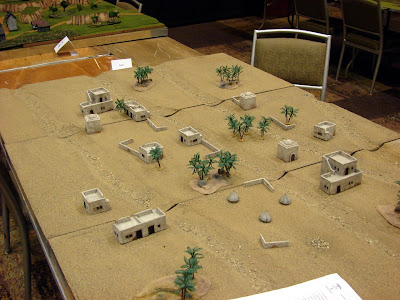 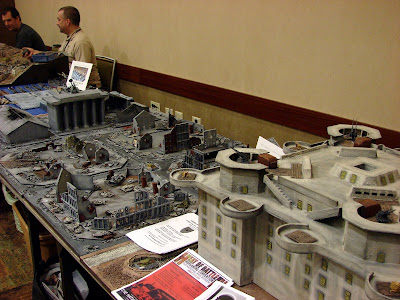 There was also a cool Omaha Beach table which was a Historical re-fight game that was about 4'x8' long. It included some cool off table models to simulate some of the ships for the amphibious landings. 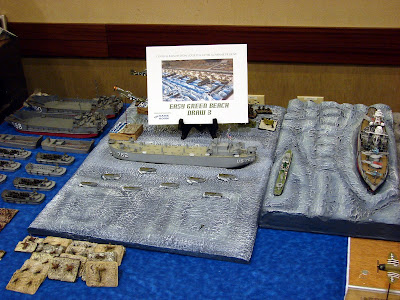 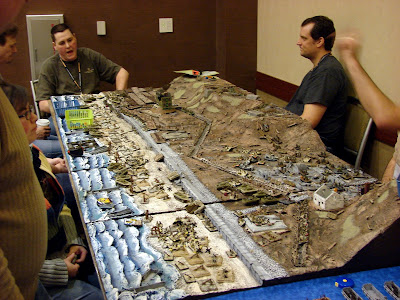 This table caught my eye, it was rather simple but yet effective and I would love to do a table like this in 28mm! 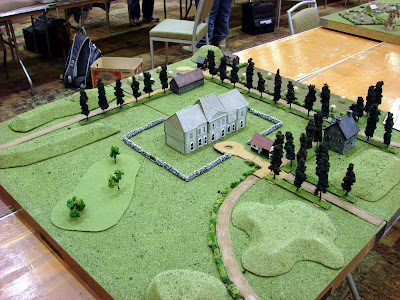 Another thing that I saw was the Old Glory hard foam terrain sections. Each piece is 2'x2' and comes painted already. They are very sturdy and light weight and I look forward to picking some of these up for GitD. 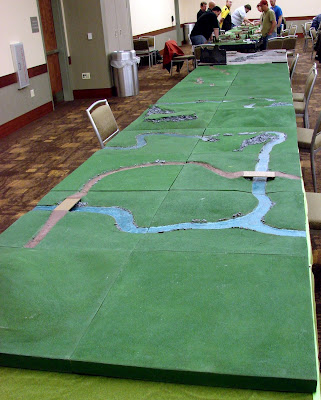 Another piece that caught my eye was this Damm that Brent Sinclair built for the WotR Demo game. it fit on one of the corners of the GW Realm of Battle boards and looked great, I may have to steal this idea for a future project I am thinking about. 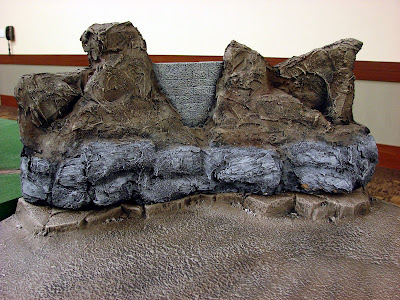 Each year Sabol Designs brings a cool looking team event display board, this year was no exception. In fact it was the 2010 winner for Best Display. This thing was huge and looked awesome! One thing I have always wanted to do was to incorporate working lights into some of my terrain, but someone (DrunkenSamurai!) thinks that's too geeky! Well after seeing this he may change his tune. 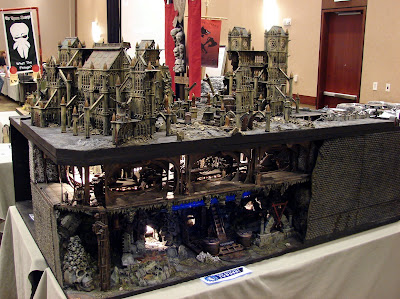 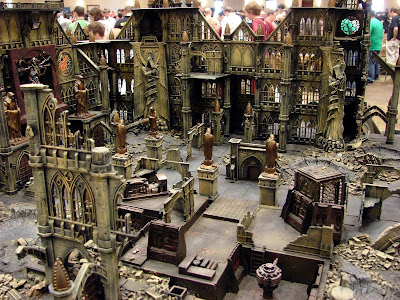 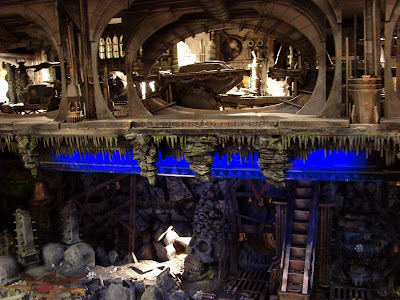 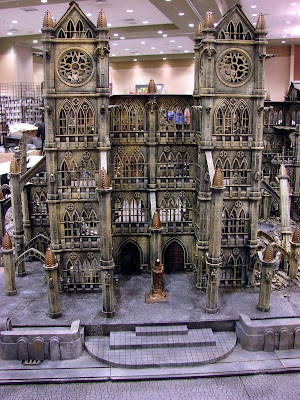 Here was another cool display board that could be used for a regular table. Each year the displays keep getting bigger and better and I look forward to seeing what will turn up next. 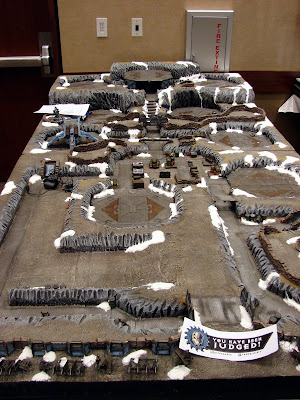 Also Adepticon has a painting competition called the Rogue Demon each year. I have read that some folks would like to see this event broken down into two different events, one for anyone to enter and one for previous winners to enter. Regardless I love looking at the entries.

Here is my friend and fellow blogger Dave Taylors entry which he featured on his blog a few months ago. 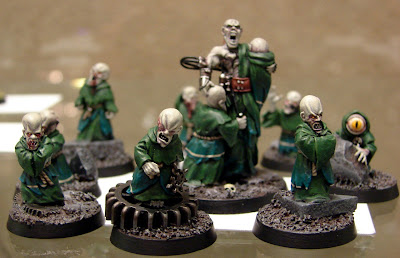 This entry caught my eye since I love WW2 and this was a 28mm vehicle, I think it is a Bolt Action miniature. 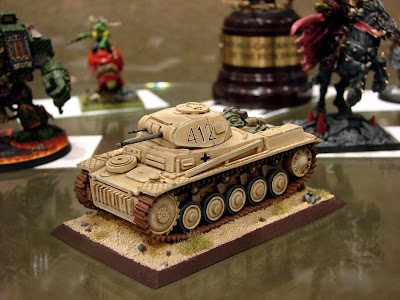 This shot was a bit blurry, but I liked the paint job and the figure, it is some sort of sea creature. 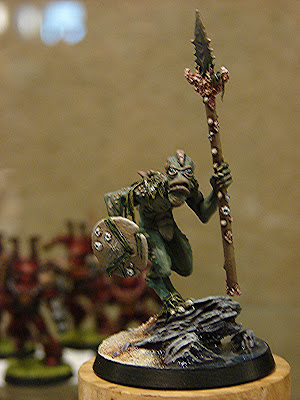 And this Land Raider was way cool, I love the whole effect on this model. Some really nice painting on this. 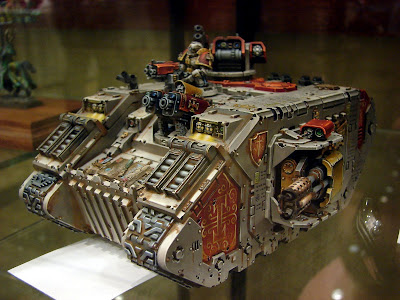 I will leave you with one last picture, this was taken on Saturday during the 40K team event, the whole room is full up of 40k gamers! If you have never been to Adepticon, you are missing out on one heck of a weekend! 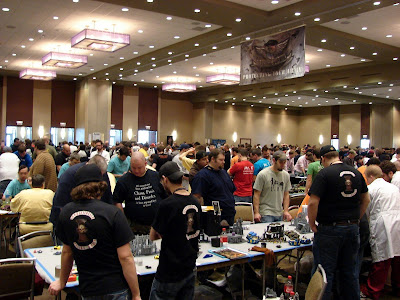 Thanks for the pics.