we only have 11 days until Gathering in the Desert, the terrain is built & packed, the shirts are ordered, the prizes are in, now all we need is players. We are at 19 players now and could get a few more. I am looking forward to the event & I am not playing, will be running it. Since we are the first Lord of the Rings event on the 2009 tournament circuit, I want to get the season off on the right foot, which I think it will. Now we just need to get to the 21st, which I hope that night to be able to make an update here, but we will see on that one.

So with nothing else to do now, my thoughts turn to Adepticon in April. I have been working on my Legends of the High Seas game and have a few surprises or the players which I will not let on about here. Sorry, Dead men tell no tales!

Now I will be playing in the Lord of the Rings Singles event while at Adepticon and I need to start thinking of what army I would take. Now I frequent Adeptus Windy City LotR forum and have gotten to know a few guys. Well Brent Sinclair is the self proclaimed Rohan Horse lord over there and he also builds themed armies. So a few weeks ago as we were chatting the idea came to me about doing an Isengard Scout list. Now most people do not take the scouts since they have a lower defense than their White Hand brothers. But I thought why not take a themed Scout list using Ugluk as the leader. The list would include nothing but scouts and be a representation of the Uruk-hai scouts that kid napped Merry & Pippin in the first movie. Also since Brent is into Rohan, I could see these two armies meeting on the battlefield. So with that I set out to put the list together, and here is what I came up with:

Now will the list do well, probably not, but its themed and compact to take across country. So after figuring out the list, I took a look at what I have in my collection. Well I have everything except Ugluk. Now I do not like the model that GW came out with for this Uruk, just something about him doesn't do it for me. So I did a simple conversion with a metal scout which I liked and added a orc in his hand. If you remember from the movie, Ugluk made his appearance when the Orcs that were with them wanted to eat the hobbits, well Ugluk beheads one of the orcs and that's the end of the discussion. So Ugluk in game turns can kill one of his followers to automatically pass Courage tests when the army breaks, so I knew I had to have him holding a head. So here are a few pictures of what I came up with.

Here is a close up, I added hair to the poor orc he is holding, which came from one of the two handed plastic orcs. 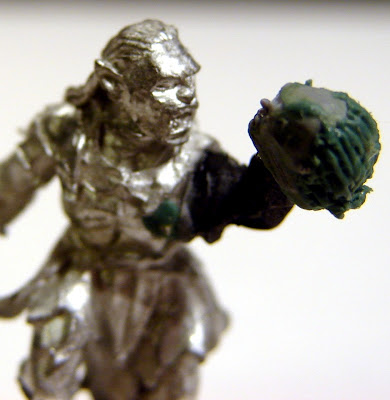 Here is a close up of the face, you will notice the left arm is black & that came from one of the plastic Uruk-hai scouts that I had, I liked the way the arm looked & it also had a open hand on it. 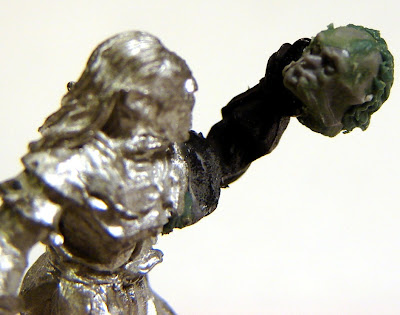 Here is another shot of the face, you can see the green stuff here which was a pain to add to the head since I did it not mounted in the hand at the time.

Here is a shot of the full pose. 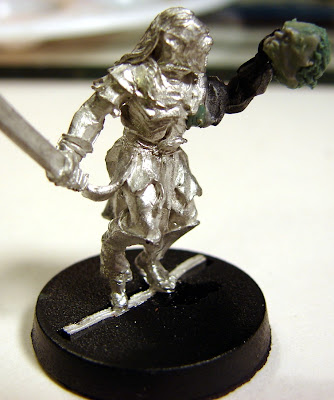 And here is the other side, which you can see the arm better with some green stuff to use as filler to the body. 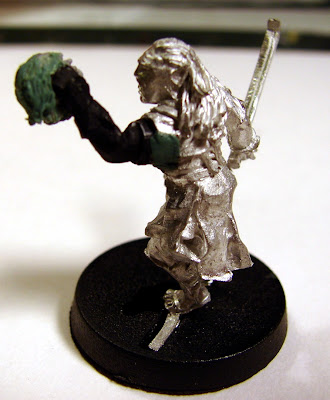 Also I love converting models, this is a Uruk-hai archer that I did when I couldn't find the plastic scouts locally. The body is a metal uruk-hai and the arms are from another hapless orc. I really like this pose and I will be stringing the bows by the way. 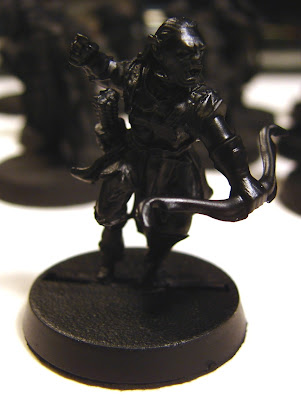 Here is a whole shot of the 350 point scouts after I primed them tonight, next up will be painting, maybe I can get them done before GitD? Hmm we will see. 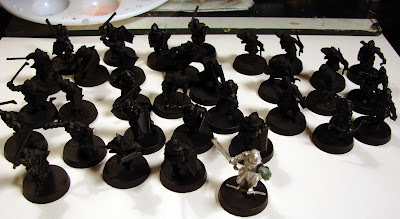 Labels: Adepticon, Gathering in the Desert, GitD, Lord of the Rings, LotR

Actually, the Uruk Hai scout list should be a good battle against Rohan.

"Meats back on the menu!!!"
awesome idea, wish I could be there!

Conversion looks good Tim. Can't wait to see them all painted up.

Well they could be painted up by the time of GitD, but we will see. I just cranked out 80+ figures for someones army in about 4 days worth of work, so getting 30 of these guys done should be easier.

And Yes John, "Meats back on the Menu Boys!" Damm should have used that for the title!

Looks like he's about to do Hamlet with that head! Pretty cool modification though.

As I said on AWC, my Rohirrim reinforcements from the Westfold are looking forward locking in battle with your filthy uruks. Red Dawn indeed.

Hope things go really well for you next weekend Tim! I'll be chatting with you very soon after!

Dave, thanks for the comments & thanks for all you did. You were one of the reasons we are now on the circuit and my hats off to you sir.