The Good, the Bad and the Ugly of Grumble Bowl 2019 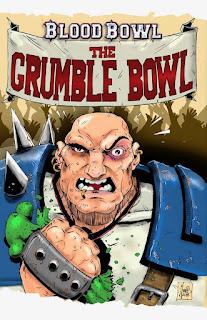 So, its Monday morning after the Grumble bowl 2019 here in Phoenix and I have had some time to mull over my experience and I thought this may be the best way to document it, so let’s get started.

The Good – Well we had a Blood Bowl event at my local shop, that is awesome enough! This would be my first ever Blood Bowl tournament as a player! When I arrived, the tables were all set with GW pitches, dugouts, templates and quick reference sheets. All the boards were using the regular pitch, some boards are hard to use due to the graphics in my opinion. So, to arrive an hour early and everything was set up and ready to go was awesome! Check in went very quickly as I was early and one other person (Mike) was there. This event you had to register for the NAF and if you had not done that the organizer was getting you signed up there, once again awesome.
I got to play three games for the event and they were enjoyable, although my second game had me loose 8 players to casualties, that hurt! But all in all, the games were fun and no major issues with any of the players.

The Bad -  Well, as this was a NAF sanctioned event, you had to pay $10.00 to join the NAF. So this in a nutshell added $10.00 to the entry fee of $15.00, so it was now $25.00 to play three NAF sanctioned games. Now I have been a member of MAF from when it was free, but now in order to be a member you must pay $10.00 a year, which is not bad, but I still do not see the value in being a paid member of the NAF. Yes, you do get a token and two dice for your $10.00, but it can take up to 9 months for those to get sent to you. Seeing how I would only play in this tournament, I am not sure if it’s worth it.
Also speaking that this was a NAF sanctioned event, I would have thought more players would have been there, we only got 6 players! What the heck happened to all the players? Did the event being NAF sanctioned scare off folks? I will admit, when I heard it was NAF sanctioned, I almost backed out. I play these games to have fun and a good time, with it now being something that players all over the world track their win & loss record, I was expecting to see a lot of “hard core” tournament players. Maybe that is why players did not show.
One other thing that was a downer for me, is that last year what you got for your entry fee was a draw. Last year each player got a ball tray, a Beer Mug and a few other things. I was really looking forward to at least the ball tray as the store prints these on their 3D printer. But the store owner was out of town for personal reasons and nothing got made by any of the other employees (now many may not be able to use the printer, so I get it), but I was really bummed by not getting anything for my entry fee.

The Ugly – Well the lack of promotion for the event, now to be fair the store owner knew he failed on this and apologized for it several times. He has had his time split with being here in Phoenix and doing repairs to his families homestead in Montana, but couldn’t the other employees have stepped up to help? I know a few of them promote other games, but this may have been a reason for the lack of players. What happened to the community? The other thing is that we started late and this was not the organizers fault as he was waiting rather nervously for players to walk in.

So overall it was a well-run event once we got started, but I was rather disappointed in the lack of players. Other than myself, Mike and Eric, we were the only ones on time, the others showed up late (granted one was the store owner who stepped up to play as we only had 5 people). I was asked if I would play in this event again, right now I would say no, the cost and the return was not there for me. I bought a new team (two boxes actually) and spent time building, and painting and even fabricated a display board all for not. The money expended just does not make it feasible to pay all that money for little to no return when I could get in three games with the paying so much.