Finally finished up the Father Repentias unit for my Sisters of Battle army. As I posted last time, I decided to do something different than use the GW Sisters Repentias, I wanted this unit to be Imperial men who were trying to absolve for some sins toward the Emperor, so the only figure that is from the GW SOB Repentia line is the Sister with the Neural Whips. The rest of the figures are from the GW Empire Flagellants. So here is a group shot of the assembled unit, next up will be paint. 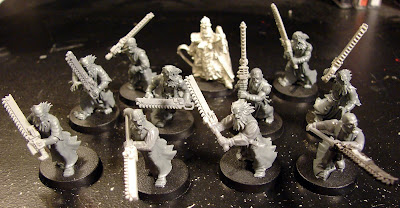 Here are three figures that I particular like, the arms on these figures come from the Empire Spear men box. 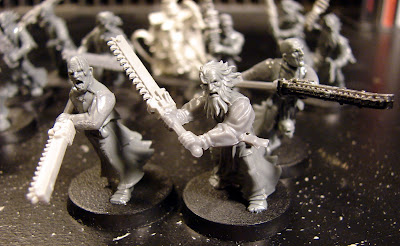 These two figures were inspired by my good friend Rob over on his blog http://dspaintingblog.blogspot.com/ After seeing his Miners that he is working on, I stole the idea for my Fathers. Once again the arms come from the Empire Spear men box, the Chain sword in the first picture is from the IG box set, the second chain sword comes from a Chaos Marine. 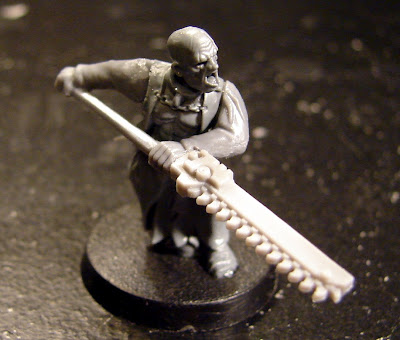 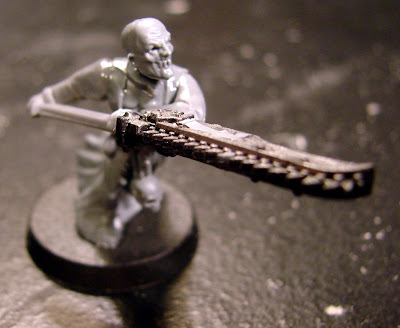 This figure uses the commands arms from the spear men box, it was a sword but a quick cut & poof added a Chain sword! 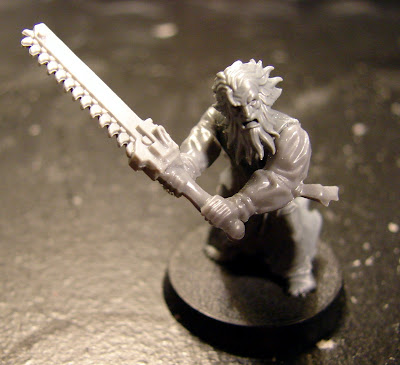 I also put together two more Arco-Flagellants to bring the squad level up to 6, which is the most you can now have. Once again used bits from the Ghoul as well as the Flagellants box set. Although I did use a mutant head on one of these guys. I really am looking forward to painting these guys up. 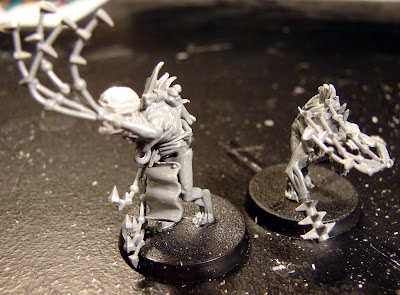 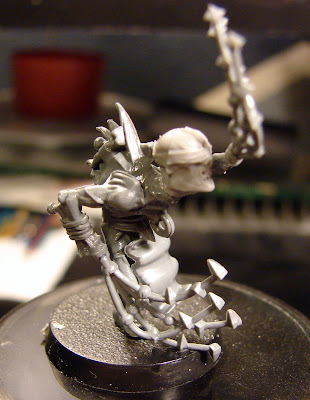 While on my Road trip I picked up Dan Abnett's Eisenhorn Omnibus, so while reading the first story (Xenos) Eisenhorn is joined by a Adeptus Arbite by the name of Godwyn Fischig. I was intrigued by the Arbites and had downloaded the Arbites Mini Codex from the Bell of Lost Souls http://www.belloflostsouls.net/ .
So last night busted out my bits and started making a small unit of Arbites to use in a few Inquisitor games. First up a few Arbites with Suppression Shields & Power Mauls.

I started with Generic Cadians and took off the Imperial eagles off the Brest Plate as well as shaving the backpack bracket off the back of the armour. I also shaved down the helmets taking the sides & back off leaving the Imperial Aquila on the front. The arms, shoulder pads and Shields came from some plastic Void Viridians that I had. The Power Maul is a GW IG Missile that has been cut down to look like a power maul, this was the hardest thing for me to come up with, but it looks good. 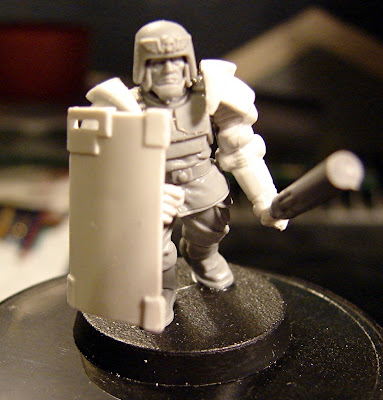 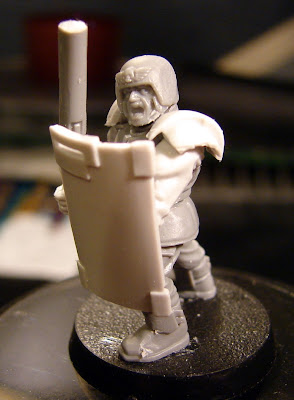 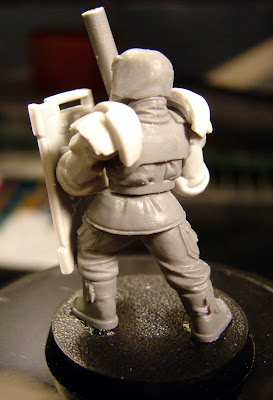 Next up are three Arbites with Combat Shotguns, I did the same shaving and added the Void bits, the Shotguns come from the Void plastic Junkers and look pretty good. 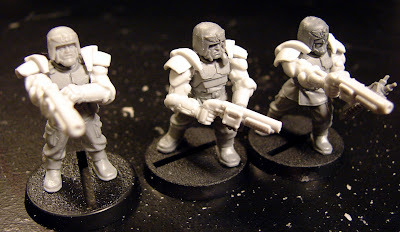 The Sergeant is the Imperial commander from the Baneblade kit with a Void Bolter swapped out with the GW Bolter. Since he is a commander figure I can use him for just about anything really. 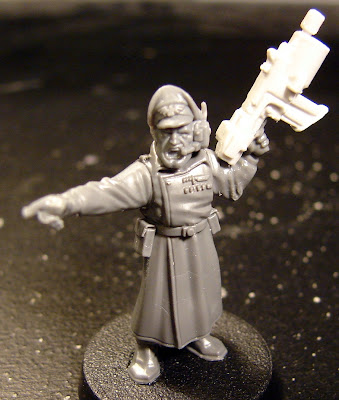 And here is all the Arbites together, it took me about 3 hours of working on these guys last night and I am happy the way they came out. 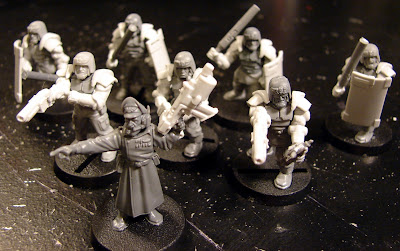 So there you go, another update, now to get back to looking for a job since my office closed at the end of July...
TK
Posted by Tim Kulinski at 11:42 AM

VERY nice. I like the Arbites especially. I can't seem to find these Void plastics, have they been discontinued?

The Void Plastics were in the Void 1.1 box set that was released sometime around October of 2003. They are pretty hard to come by but some online places may still have the box's.

If you can't find the arms, you could use the Cadian Arms, you would just need to make shields.

you can buy the Void figures from Scotia Grendel BTW. Nice work on the fathers and the archos.