As some folks may know, last week I made a pilgrimage to Games Workshop Headquarters in Memphis to do a week of training for the on call program.

But I did get some shots of the Games Workshop Memphis Battle Bunker and the outside of the GW HQ. As seen below, you can't miss the building, it has a huge Imperial Eagle on the front as well as a seven foot tall Space Marine statue out front! The main entrance to the HQ is on the left while the Bunker is on the right. 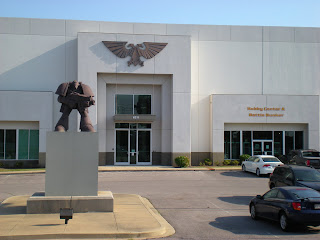 Inside you find a small but well stocked GW store that had most products (what they did not have they could order from the warehouse in the other part of the building). They also had a few tables set up for painting as well as vending machines. But adjacent to the store was the bunker with all the tables. Here is a shot of the overall set up from the store. 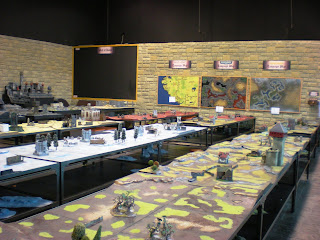 All of the tables were GW's Realm of Battle tables with stock GW terrain on them. Now I was a little disappointed in the quality of the tables. They were good, don't get me wrong, but they all looked the same with a few exceptions. Take for example this awesome Epic table that had a ton of the old buildings on it. I know Mike from the Da Green Skins blog would have loved this table! 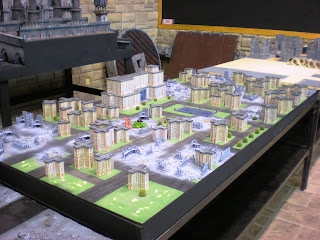 Also there was the cool table from Gamesday a few years ago as well as an other Space Marine statue. 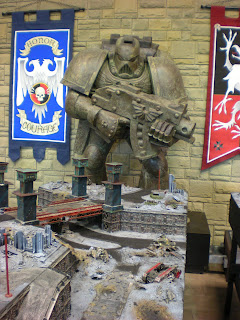 Along the front of the bunker were display cabinets with just about every army that is currently out, from 40K, WHFB and LotR/WotR. I tried getting some pictures but the glare from the outside kept washing out the pictures. 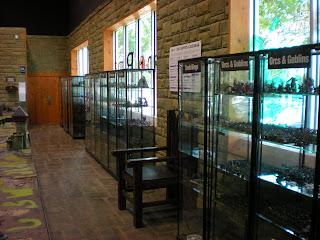 Now one thing that did catch my attention was these 3 huge campaign maps that were hanging from the wall. They had three of them (40K, WHFB & LotR) and they used the Mighty Empire tiles. Just to give you scale, each board was at least 8'x4' in size, so just imagine how many tiles it took to build these! man it must be nice to run to the back to get whatever you need! 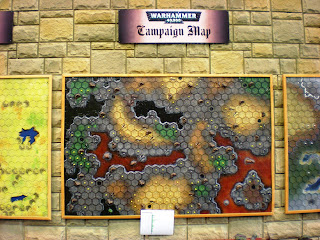 All in all it was nice to visit and get to see the Bunker as well as GW HQ. My training went well and now I just wait for the Emperor to call, which will probably be for Gamesday in Chicago.

Wish I could talk more about what I did, but unfortunately being a sort of employee means some things you just can't talk about. Sorry folks.

On a side note, I will be making another update for the Tale of Four LotR Gamers in a day or two, my 175 points are done and ready, just need to take pictures...

Good report. Always worth see something new, and I knew nothing about the place. I love the Epic table too, especially how full it is and the titan vs. gargant centrepiece.

Interesting photos, Tim. Thanks for sharing!

Good luck for the call from the Emperor! :)

goods to see the [very] old Kasr (?)table still getting some use. Of course there were 6 sections made for the original display in Toronto.

Tim that EPIC table is very cool. Now I want to start building one in what little spare time I have. Thank you for sharing the pictures from your trip, you can't call what you did work. Good luck with this new adventure in you life I wish you the best.

Looks like they fixed up that Kasr table, from the photos they posted last week.

I can see why you would have enjoyed your time there.

Still annoyed at GW though :P

What strikes me is just how much like a "US" version of Lenton HQ the building looks!

maybe they have an STC for thier own buildings...