It is no surprise that I have been working on my Flames of War Afrika Korps army. With Rob getting his British 8th army going I thought it was about time to get the Afrika Korps up and going. Now these are just work in progress and still need to be finished up, all of these have been dipped and are waiting for decals and dullcoate.

So first up is an objective counter of fuel drums. After reading Brazen Chariots by Major Robert Crisp (awesome book by the way!) I knew I had to paint up these fuel drums since petrol was in limited quantities for both sides of the war in Afrika. 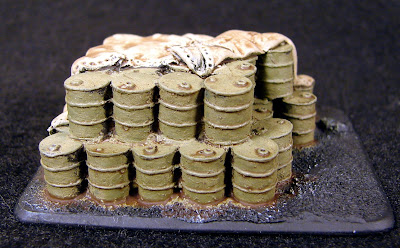 Next up is a dreaded 88's, I have to confess, I bought this model after FoW came out in first edition since I love the look of the 88's. I put it together and stuck it away until just recently. Now it seems I have 5 of these models! To bad I can only have 3! 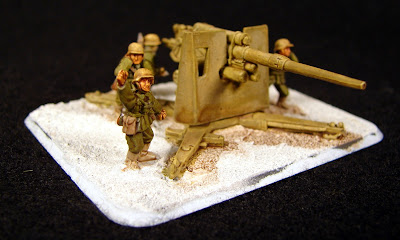 Another item I am working on are three PAK 38's. The one in the middle is from Old Glory and the two on either side are from Battlefront. I think they blend together nicely. The crews are being painted now.

Now we get to the good stuff...Tanks! Here are three Panzer III's that are awaiting decals and there final weathering. I plan to model the Panzer 15 Division so these will be marked appropriately.

Here is another group of models that were purchased a long time ago with the 88's, another Panzer III and a Tiger Tank. I plan to expand my army to cover Tunisia so the Tiger will see action in that army list. Plus what good German armour fan would not have at least one Tiger Tank!

And the last shot is of the infantry, the base colors are being blocked in now and I plan to have these done by next weekend.

So there you go, the start of my North Afrika korps.
TK
Posted by Tim Kulinski at 8:26 AM

What base color did you use on your DAK tanks? The book calls for Vallejo Iraqi Sand, but it looks too light to me.

Great job on the paint and terrain, it looks fantastic!