Steel Legion Done, Orcs on the Horizon & a Clean Desk!

That's a deep subject huh??? (Sorry bad pun!) But really, got a little update on a huge project that was completed last night, the Steel Legion project or my buddy Lonnie Jordon who is over in Iraq. I started this project a while ago with all the infantry, but over the summer Lonnie was home & we went shopping for his armour for the army. He bought 6 Chimeras, a Valkyrie, and another Basilisk, this was added to three Leman Russ, one a Vanquisher, three sentinels, another Basilisk as well as. All of this had to be repaired and assembled & painted before he arrived back home on December 9th. So here are a few shots of the completed army.

Up first, two basilisks, the one on the right had to have a new railing added to the back of it since it broke off, so I went to my bitz box and found some stand in parts. 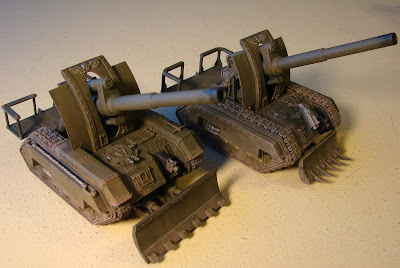 Next up a Forge World Vanquisher that need some TLC. 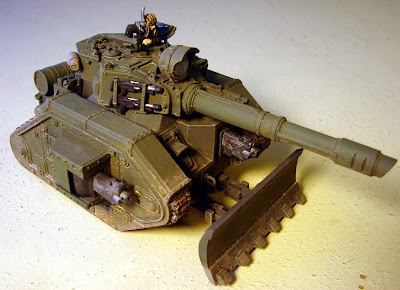 This Russ also needed some TLC, the side sponson was missing the front plate and I had to dig through the bitz box again. I had an extra and had to glue it back onto the sponson, all ready for battle now. 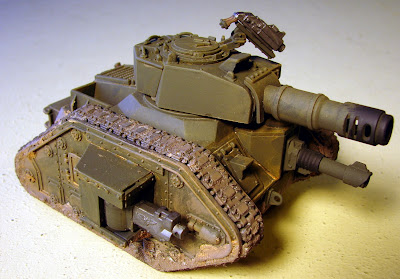 Lonnie wanted one Russ to have a Special character, Knight Commander Pask added to it. GW does not make a figure of him, so this came from the Baneblade model. I think he works rather well. 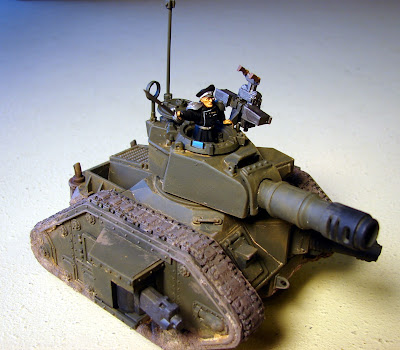 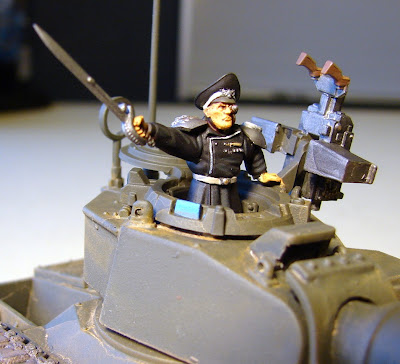 Also Lonnie wanted the armour to look like it was out in theater, so I grimed up the Russ' to give them some extra mud effects. Once the model was painted, I added Liqutex Stucco to the tracks and to the side to give the effect of mud. I also added static grass to it while it was still wet. Once it dried I came back with Americana Mississippi Mud and a black wash, viola instance mud! 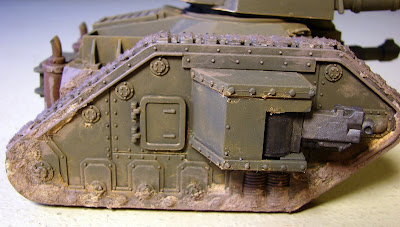 This Chimera had allot of TLC work done to it. Lonnie was going to use this Chimera for his Lost & the Dammed army, so Chaos symbols were added to make it look more Chaos ie. I had to take these off and make this a proud vehicle for the IG. The turret is completely new since when I was trying to clean up the other one it broke. So another dive into the bitz box. 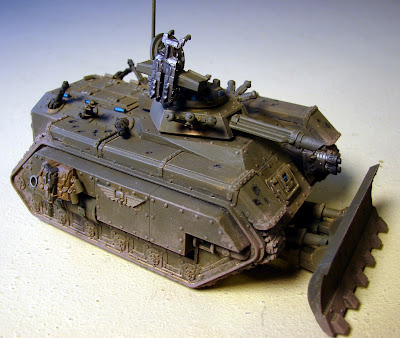 One thing I had forgot to do on the Valkyrie was the flight stand, so I added a old 4th edition ruin set to the base. This fits in with the rest of the army and does a good job of hiding the clear stand. 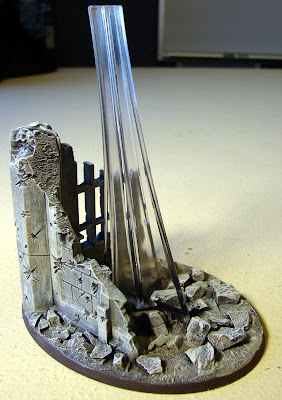 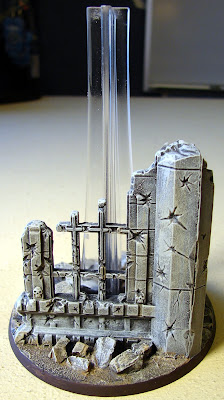 Here is a shot with the Valkyrie on it, it looks pretty cool in person. 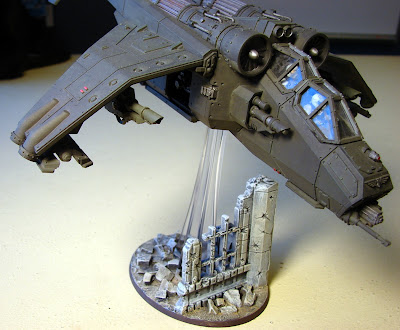 Also Lonnie wanted Commissar Yarrick painted for the army, so here is the most feared Commissar in the Imperial guard. 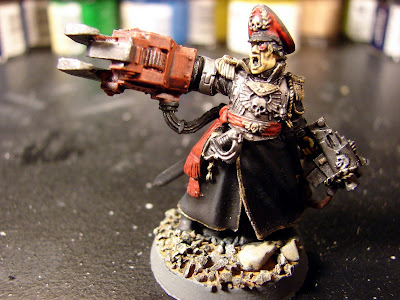 I also made a few Command group figures for Lonnie, Here is the Company banner all painted up.

And here is the Medic. 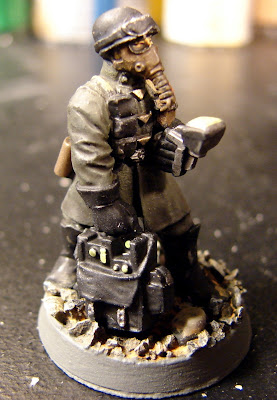 One last figure, Lonnie had a Lord Solar Macharius figure with the group, now the current IG codex does not have stats for him, but Lonnie could use him as his Commander for the army, so here he is in all his Glory. 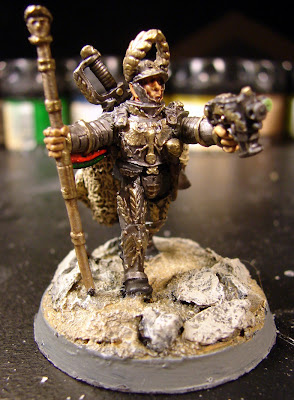 So there you have it, a huge project done, now I just need to deliver it to Lonnie when he gets home next week.
Also last week I did a crazy trade with my buddy Mike, he had a Orc & goblin army and I had a huge Tomb Kings army. Well I was not really interested in the TK's so I trade him the whole army for this huge lot of Orcs & goblins. So yes this means I will be getting back into WHFB! 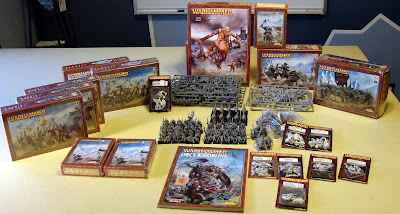 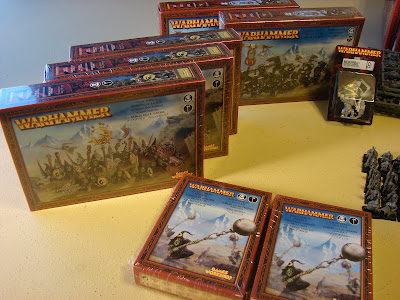 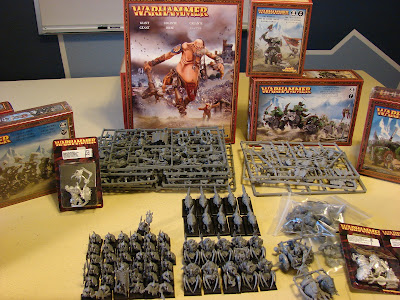 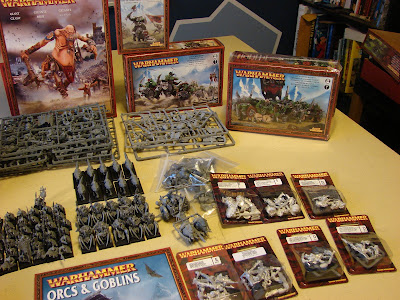 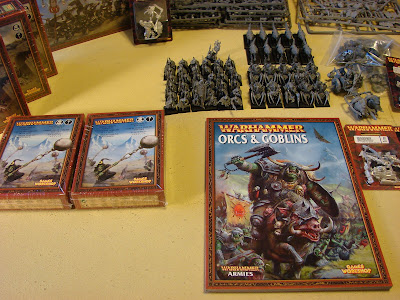 Also I mentioned in my last post, I am going to start my own painting service, still working out the details, but the first thing I needed to do was clean up my desk. so here is a few shots of my clean desk which is just waiting for some paint commissions. 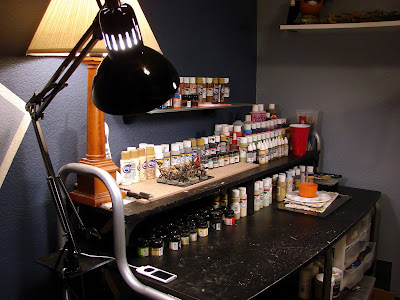 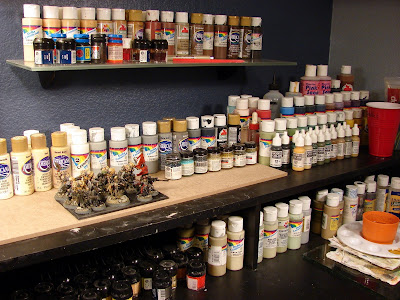 So there you have it, been busy looking for work and painting models. Hopefully 2010 will be a better year...
TK
Posted by Tim Kulinski at 8:41 AM

I think dwarves would be great on your painting table :)

They will & they have been, just hidden from view. What you don't see in the shots of the Paint Desk is the game table, guess where everything went LOL!

Looks good, Tim. I've got Orcs of my own looking for a fight... and Dwarfs and Ogres.... get those boyz ready for some fighting!